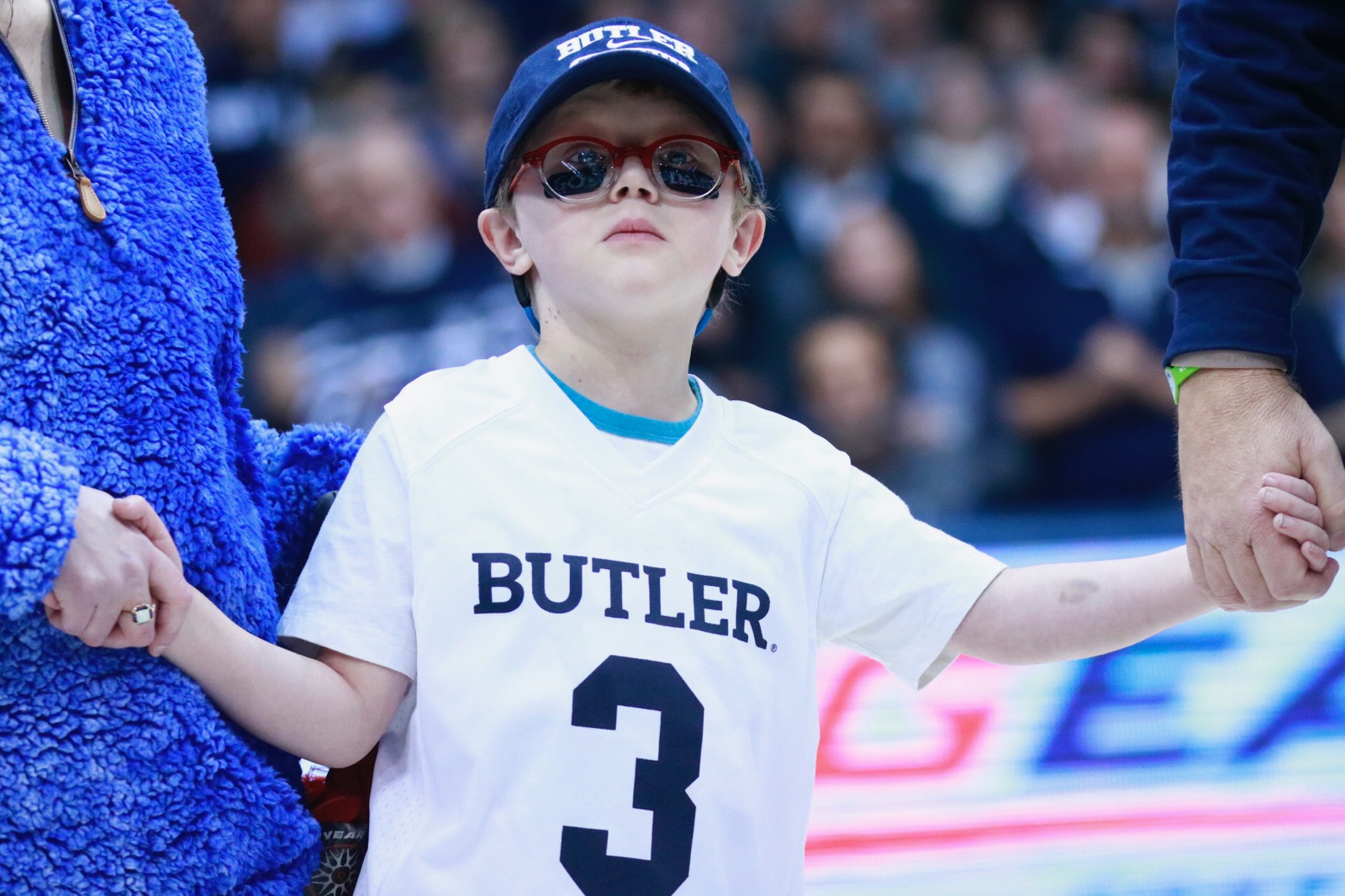 “I can get bass and stuff like that,” Dennison said.

At 7 years old, he also happens to be the youngest member of the Butler University men’s basketball team. He has his own locker and everything.

On Jan. 4, Dennison signed a national letter of intent surrounded by his family in front of his new teammates. Head coach LaVall Jordan called Dennison “one of the best signees coming up in the history of Butler.”

Dennison was diagnosed with a second chromosome deletion when he was one, becoming only the third reported case in the world. The genetic disorder includes complications like autism, and Dennison wears a backpack with feeding tubes for 20 hours a day.

The nutrients are delivered directly to his body, but a high risk for liver failure remains.

The Fairland, Indiana, native became a member of the squad with the help of former Butler coach Thad Matta and his wife Barbara. When Thad coached the Ohio State University men’s basketball team, the Buckeyes adopted a child through the Friends of Jaclyn Foundation.

“The whole thing is to impact a child’s life,” Thad said. “They’re going through the worst of the worst. But for the kid and family, this is a wonderful experience. Something they will never forget.”

Friends of Jaclyn started in 2005 and aims to improve the quality of life for children and their families battling pediatric brain tumors and other childhood cancers. The non-profit organization has helped 730 families like the Dennisons.

Alicia Provenzano, FOJ adoption and outreach coordinator, said a team makes all the difference to a child fighting health issues.

“Teams give their child special love and support by inviting him or her to practices, games and team events,” Provenzano said. “They act as a distraction from the hospital treatment and allow a child to simply be a child.”

Barbara heard about Dennison’s story through Friends of Jaclyn founder Denis Murphy. Shortly after Murphy told her about Dennison, she connected with Destinee Jordan, the wife of current Butler head coach.

Shortly after, Dennison became a “FOJ,” or Friend of Jaclyn.

“He was hanging out with the players and laughing,” Barbara said. “He was smiling and didn’t know his backpack for his feeding tubes was there. You could just see how happy he was.”

Today we added a very important member to Butler Basketball! Through the @FoJFoundation #Team120 adopted & welcomed Seth Dennison to the Bulldog Family. He brings an unmatched courage & fight to our program. Excited for our fans to get to know him & his family in the coming days. pic.twitter.com/4dz3u2XcfL

He paid a visit to Butler’s locker room and explored his locker, complete with a silver nameplate. He then posed for pictures with his teammates.

It wouldn’t be his last visit to his locker, as he would return soon.

Butler signs 7-year-old Seth Dennison to an NLI through the @fojfoundation. Learn more in this episode of Inside Butler Basketball connected by Smithville Fiber. pic.twitter.com/2OX4OB1PuF

Two days later at the Seton Hall-Butler game he made an appearance during a media timeout. Dennison wore eye black with “Go Dawgs” on his left and right cheek. Dennison’s mother Jenn and Denis Murphy walked with him to center court in front of nearly 9,000 fans.

Murphy introduced Dennison to the Butler fan base and shared FOJ’s mission.

“It was a moment in time I will never forget and is impossible to explain to anyone,” Murphy said. “You had to be there to experience the warm hearts of the Butler family.”

Our teammate Seth and his family in the (Field)house tonight.

Count us off Seth, we sing the War Song after wins. @FoJFoundation pic.twitter.com/emyqBeme4E

Seth has a locker right next to freshman Campbell Donovan.

“He’s just as much a part of the team as I am,” Donovan said.

The newest Bulldog didn’t hesitate to rattle off his teammates’ names. He and his father, Garnet, said he loves a few in particular: Donovan, redshirt sophomore forward Sean McDermott, senior forward Kelan Martin and senior center Tyler Wideman. Seth made sure to refer to Wideman as “Big Cat.”

“Those guys texted him the day before the Seton Hall game,” Garnet said. “They made his day.”

As if Seth wasn’t impressive enough, he wowed his fellow Bulldogs with one more trick up his sleeve.

“I’ve never seen a 7-year-old correctly pronounce so many dinosaurs,” Donovan said. “At the dinner table, he started naming some off. We would start talking about something new, and he would still name some more.”

Seth’s courageous spirit and happy go-lucky attitude have impressed many people, none more so than his teammates.

“He is incredible,” Donovan said. “The kid is a fighter.”

You can follow Seth on his Facebook page, @PrayersForSethyBoy. The Dennison family is in the process of working on possible fundraisers and runs/walks for the spring.