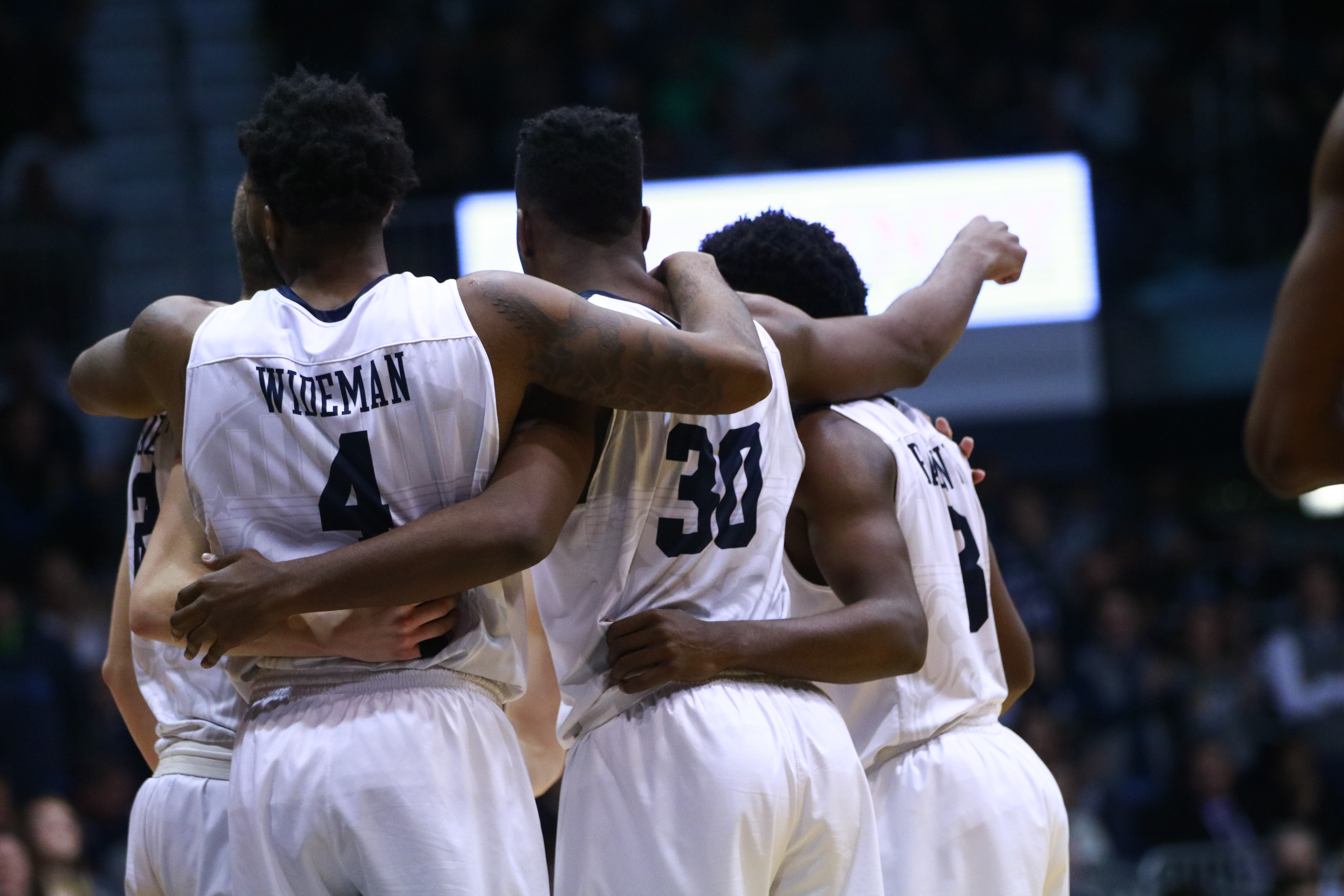 Butler’s starters gather on the court during the Villanova game on Dec. 30. After defeating No. 1 Villanova 101-93, the Bulldogs are 3-0 against the Wildcats in 2017. Photo by Jimmy Lafakis.

What do you do when the No. 1 team in the country comes to your school?

You grab your friends, squeezed shoulder to shoulder in the student section, and storm the court, because they drove up, down and from all around — Memphis, Crawfordsville and Columbia City — to see this too.

Butler did it at Hinkle last year. Then again on the road. A second time has to count for something. Three makes a pattern. Good lord, what a pattern that would be.

Oh, the Bulldogs would do it all-right, go 3-0 against Villanova when every other team in the nation has a cumulative 1-44 regular season record against the Wildcats since 2016. Forget the 5.5 point spread favoring No. 1, because Butler came out on top, 101-93.

But hang on —the game tip-off was delayed. This was a nationally-televised game, and Duke and Florida State ran a tad long. At that point, waiting could only heighten anticipation. The fans were buzzed, and it had nothing to do with the newly instated alcohol sales at concession stands.

A fan walked up to his 300-level seats. Careful now, he almost tripped, almost spilled his beer going up the stairs because who could focus on stairs when the nation’s top team was on the court? Careful again, he almost missed it — did he see that steal? Paul Jorgensen wrenched the ball past Donte DiVincenzo for a layup and hey ho! Butler  with the 64-48 lead in the second half.

What did this Butler team do to beat the country’s best, when it was just three days ago they barely snuck by an unranked Georgetown?

Prepare like crazy. You want preparation? Senior leadership? How about Kelan Martin and Tyler Wideman recognizing Villanova’s in-bound plays before the coaches, because they saw it last year and saw it coming this year? “Phenomenal,” head coach LaVall Jordan called it.

Because how else is Jordan supposed to explain how the same team who trailed Georgetown by 20 could light up Villanova for a 23-point lead 72 hours later?

Before tonight, people couldn’t shut up about Butler’s 3-pointers. Can’t shoot 3s, can’t defend them either, they groused. They weren’t entirely wrong. Only 95 other Division I schools have a worse 3-point field goal percentage than Butler. It’s not a favorable stat considering there are 351 total Division I teams.

But after Villanova, questions about 3-point shooting sounded more like this: “Paul, umm, what was your thinking on that shot? The one just past half court in the first half?”

You can bet everyone in the room knew what shot the question was referring to. You don’t? Villanova’s Mikal Bridges never thought he’d have to defend a shot 35 feet from the basket until today, when he saw Jorgensen pull up.

Quick, find that clip, because the highlight itself is going to be more elegant than what Jorgensen had to say about it.

“I don’t think there was any thinking to it.” Jorgensen knew his answer might not be enough. What makes a kid attempt a shot like that? He tried again. “I just felt pretty confident.”

Ahh, now that makes sense. The Butler Way doesn’t allow for cockiness. No room for it. But confidence? Jordan wants confidence sweating from his players’ pores. His confidence became their confidence, basketball’s purest give ‘n go. Tonight, they reeked of it.

Almost seven consecutive 3-pointers, I tell you. “Almost” is a necessary technicality because Nate Fowler had a tip-in during that sequence. It started with Martin. Then Baldwin. Baldwin again. Jorgensen was good for two shots. Baldwin once more. Yeah, when Jorgensen’s half court shot went in, the fans loved it.

Now it makes sense, because the fans saw what Jordan knew in June. Heck, he probably saw the potential before his players did. All good coaches do.

“We got to see, there was some potential for us to be really good if we connected,” Jordan said. “If we take care of the basketball and if guys worked. And these guys work. The skill was there, and the ability was there.”

Why else ask last year’s breakout freshman to play point, a position Baldwin has never played before? Why ask Martin to do even more defensively this season, when the senior knew all eyes were already on him? It’s so your offense can outscore a team that averages 88 points per game. And it’s so your defense can out-rebound an undefeated team by 11.

It explains a lot —why this coach demands what he does.

“Coach is always on us about getting reps,” Martin said. “Getting shots. Tonight our 3-pointers fell, and it felt pretty good in Hinkle.”

Kamar? Anything else you want to add?

What else can he say? The 3-pointers fell through. All 15 of them, and just 22 attempts.

What do you do, when you’re LaVall Jordan, and you’ve just coached your alma mater past the No. 1 team in the country inside a sold-out Hinkle all in one night?

You go home. You put that phone on speaker, and call your dad on the car ride home because you know he’s waiting. Your grandma, she’s waiting for a phone call too. And maybe you apologize in good nature. The woman is over 80 years old, and Butler is already two games into conference play. All these nail biters can’t be good for anyone’s health.

So, go home and get some sleep if the adrenaline will let you. God knows you’ll need it. We’re talking about needing sleep, right? Sure we are. But the adrenaline will do some good later, because you still have three top-25 teams looming in a nine-day window, and you don’t want tonight to be the highlight of your season. Not yet.

Just you wait, Grandma. Wait till you see what this team can do in March.