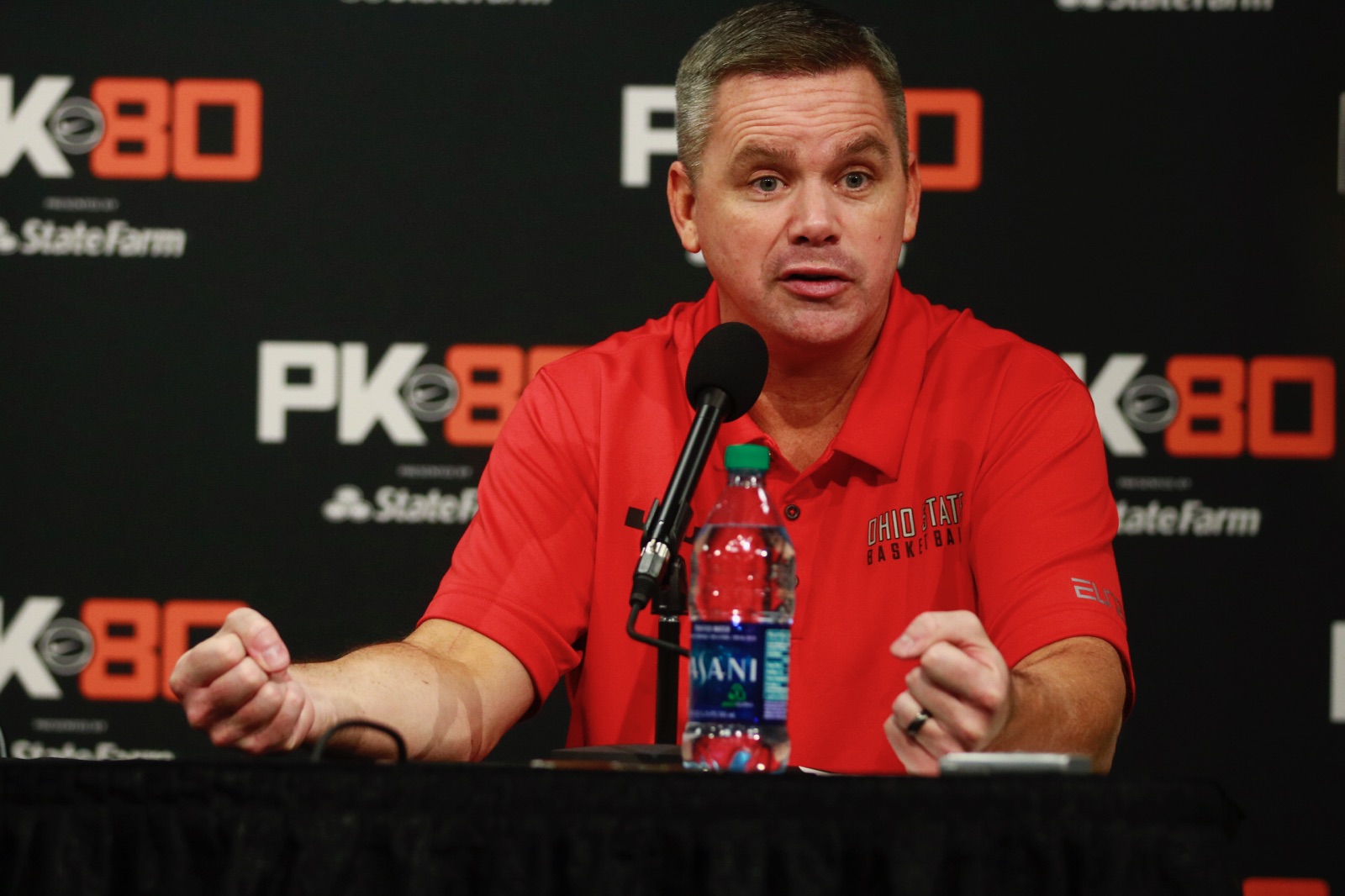 Chris Holtmann addresses the media at a press conference during the Phil Knight Invitational. The former Butler head coach left for Ohio State earlier this summer. Photo by Jimmy Lafakis.

The Butler team that beat Ohio State last night was Chris Holtmann’s team before it was ever LaVall Jordan’s to coach.

He developed Kamar Baldwin into a Big East All-Freshman selection, always giving one of his sideways smiles when asked about the guard’s potential.

He recruited Aaron Thompson, part of the highest-ranked freshman class in program history, so he’s not losing much sleep when critics say he treated Butler as a stepping stone to Ohio State.

These were his guys and his team. Before he left Butler for Ohio State, before fans changed Holtmann to “Boltmann,” and back when Jordan was still a first-year head coach in Milwaukee.

Facing Holtmann and Ohio State in the Phil Knight Invitational was always a possibility, one that had Butler fans circling the tournament dates in calendars.

For his part, Holtmann was hoping and praying it wouldn’t happen. And when an Ohio State win over Stanford and a Butler win over Portland State denied his wish, the 46 year old needed a moment to collect himself.

“As much as possible, in those two hours, you try to eliminate the emotion of it,” Holtmann said after the Stanford game. “They’re competing to win every possession, and so are we.”

Sunday eventually came around, and Ohio State held a 15-point lead over Butler. That should’ve sealed it, right? With less than four minutes remaining, ESPN handed Ohio State a win probability of 99.6 percent, chances so favorable Holtmann could pack up and go home relieved, even get some sleep.

He paced the sidelines, bunched up the material of his suit pants in his fists and squatted at the foot of the scorers table, fingers balancing on his lower lip. His coaching habits had remained the same.

Baldwin, a three! Regulation minutes became overtime minutes. Minutes clocked into seconds. And finally, you say, we’ve reached Martin’s moment, who lifted into a layup for the win.

Ultimately, maybe the game would’ve unfolded in similar fashion if Holtmann were still coaching at Butler. This was the team he helped create, and last night, he watched it work against him.

Hard to say if Martin still would’ve scored the same layup to win it all. But so long as we’re entertaining the hypothetical, we’ll toss former Ohio State coach Thad Matta in the mix and pretend for the sake of this game, he coached the Buckeyes.

What a win, fans would exclaim, to pull one over a former Butler guy! But more likely, Matta’s coaching stop at Hinkle Fieldhouse would’ve been an interesting game note, nothing more. His departure isn’t fresh the way Holtman’s is.

Besides, Matta just doesn’t lend itself to creative names the way “Boltmann” does, so what’s a fan supposed to do?

It was all too easy to turn the Ohio State game into the “Holtmann game.” And it’s easy in sports, to paint in black and white, to pit good versus bad, Holtmann against Butler.

It’s simple. Effortless, really. And it’s wrong. He took a job, and this particular one happened to be his dream job. One of five, he told IndyStar’s Gregg Doyel. Ohio State was one of five jobs in the country he’d leave Butler for.

And even then, it took Ohio State two tries; aiming for Holtmann and missing, then settling for Gregg McDermott before the Creighton head coach said no thanks. The second time around, Holtmann said yes.

So he left, the same way you or anyone else would do. He had his dream job, and it was going to cost him. Eight years, $3.1 million dollars. Oh, to be sure, his contract is three times bigger than it was at Butler.

But how much money does it take to help numb the feeling that if you leave, the very program you helped develop will always resent you? Not enough.

Yeah, he really didn’t want to play Butler on Sunday. He was on the wrong side of everything he helped build. The return to national prominence, the Sweet 16, the wins over No. 1 Villanova?

As if fans had forgotten the memorial services he helped organize for former players Andrew Smith and Joel Cornette, when he had no ties or obligations to either.

Or the time he drove to then-team analyst Emerson Kampen’s apartment, just to cry with the other coaches when Kampen’s infant son died from a neurological disorder in February.

Or maybe it was because of all of these things Holtmann did for Butler, that we knew exactly who we were losing.

A part of you wants to believe that maybe a small part of him was proud, when Martin reached in for that layup. How many hours, you wonder, did Holtmann spend with Martin, tutoring the senior to do just that? To breeze through defenders like nothing, because there’s a coach on Butler’s bench waiting for that ball to drop in for the overtime win. Even if that coach isn’t Holtmann.

Whether or not Ohio State and Butler ended up with the right coaches for each program remains to be seen. Holtmann and Jordan will probably be the first ones to say they still need to look at game film. There are miscues to fix and a season barreling their way. But for last night, they were the right guys for the job.