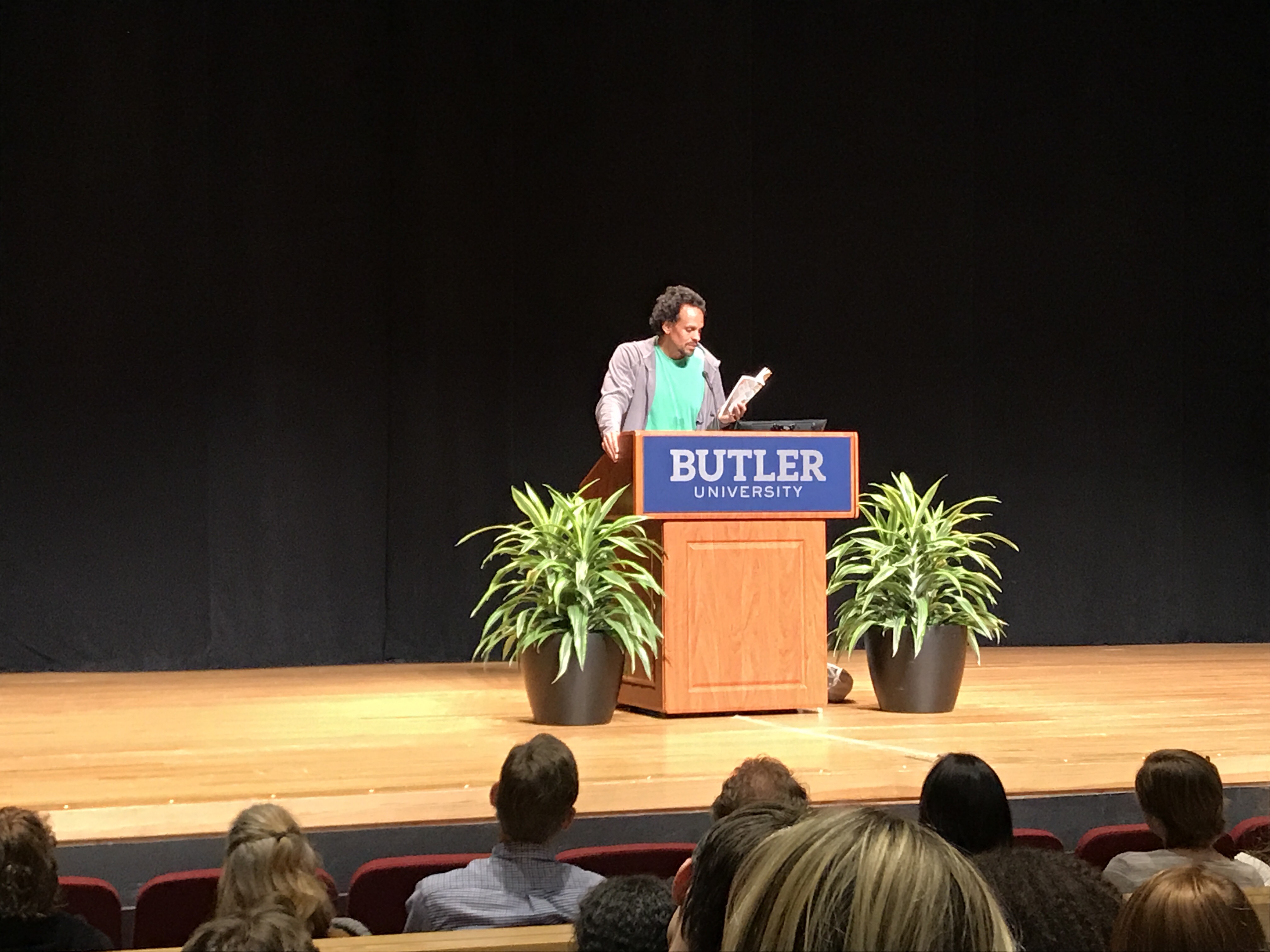 “I got these things that I’m doing, and I really like them, and sometimes I get through one and I want to read one more,” Ross Gay began at his Visiting Writer event on Sept. 7, towering over the podium in front of him. These ‘things’ in question are his new poems.

“But I’m not going to do that,” Gay continued, “because that’s rude.”

A rumble of laughter in the audience kicked off a night that would be filled with much more where that first one came from.

Gay, a professor at Indiana University among other things, proved to be the perfect person to begin this semester’s Visiting Writers Series. Although he has three published collections of poetry under his name already, Gay decided to share from a new, still untitled collection of what he calls “delights.”

Known for being “persuasively ecstatic,” according to poetry professor Chris Forhan, a hallmark of Gay’s is having the ability to excite and amuse you no matter the subject of his poems. True to character, this new collection he previewed contains poems about things like peeing in his garden to “little discuses of evil,” or coffee cup saucers.

“These are all delights,” Gay said.

Often after each poem ended, a pregnant pause ensued before applause because nobody wanted it to be over yet.

Attendees weren’t the only ones laughing, however. More than once Gay interrupted himself to join them, asking if everyone was alright before he continued.

A highlight of the event came during the question-and-answer portion of the event when somebody asked him what motivates him to write poetry. At first he was truly stumped, claiming that “’motivates’ is an interesting word.” But he wouldn’t pass the question and instead took a moment to really think through it.

Finally, he had a response.

“I mostly love doing what I do. Love motivates it.”

Though another question was asked, and then another, and the conversation moved forward, Gay wasn’t finished offering this piece of mind.

“Be motivated by love. I mean that as seriously as I’ll ever mean anything in my whole life,” he said.

This felt particularly poignant in light of many recent events and the current climate within our own country. Gay’s audience, for once, did not laugh.

Aside from this one wise moment, Gay’s overall presentation Thursday was so down to earth that anyone in attendance would leave feeling as though they’ve gained a friend.

Sophomore criminology/psychology dual major Sarah Diviney, after the event, thought Gay was a great start to the Visiting Writers Series.

“His energy was amazing,” she said. “Especially because I didn’t read [his work] prior to coming, I was pleasantly surprised by his presentation and his material in general.”

Toward the end of the evening, although he had claimed he wouldn’t read another one in order to avoid being rude, that is exactly what he did. Nobody minded. In fact, it seemed as though even Forhan, the event coordinator, wouldn’t have cut Gay off had he not done it himself eventually.

The next Visiting Writers Series event is on Sept. 21 featuring Colson Whitehead.