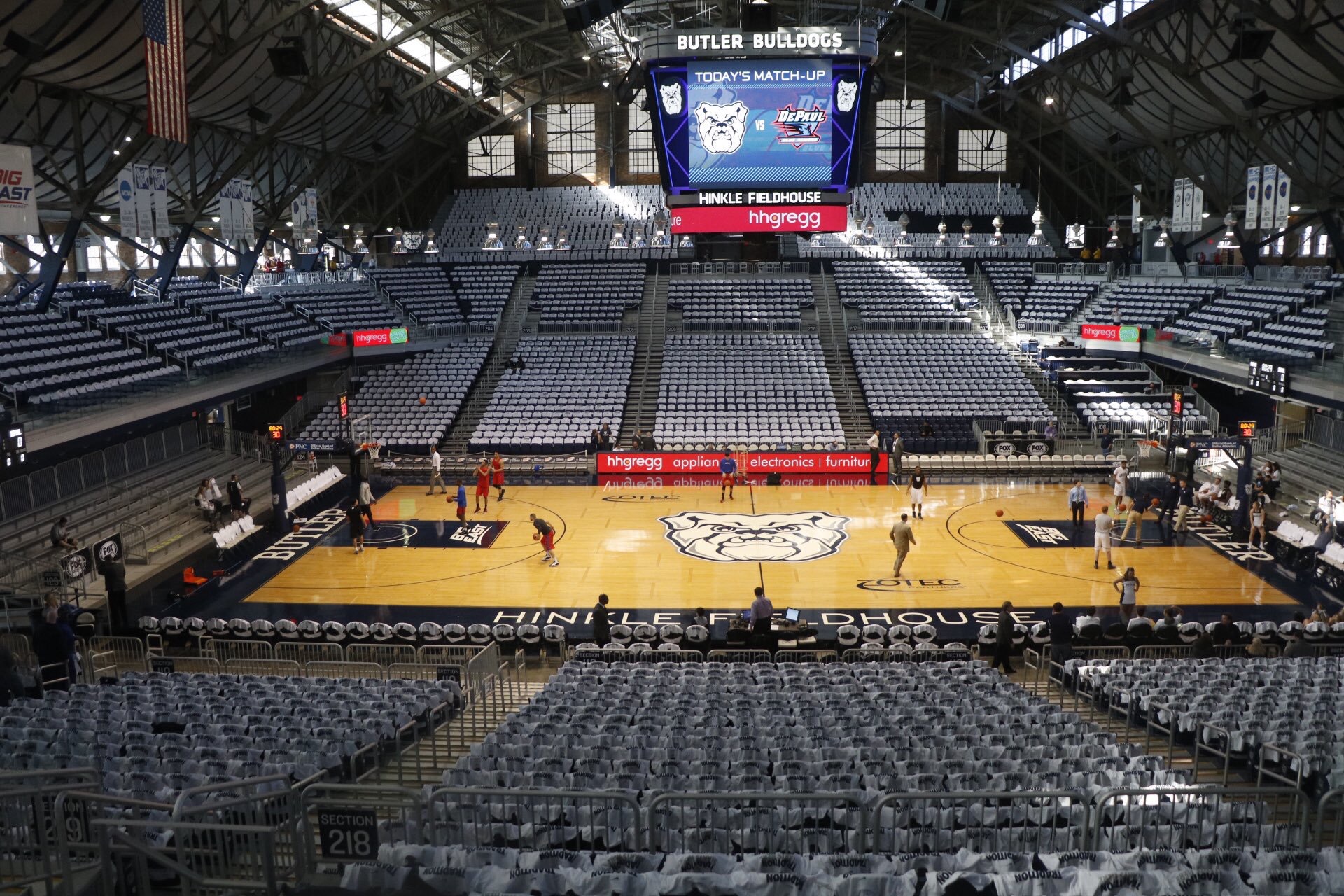 T-shirts line the seats of Hinkle Fieldhouse before a men’s basketball game. A public hearing regarding alcohol sales will be held on Sept. 18. Collegian file photo.

Last week, Butler University released a public notice that it has applied for an alcohol permit for Hinkle Fieldhouse with the hopes of selling alcohol at select sporting events starting this basketball season.

“It is our intent to offer alcoholic beverages for purchase at the concession areas of our basketball games,” Barry Collier, Butler vice president and director of athletics, said in a statement. “Butler has communicated this plan to those who live near campus and the permit application has been supported by the Butler Tarkington Neighborhood Association. Butler is committed to maintaining the exciting and positive gameday experience that our fans and their families enjoy for all contests that take place on our campus.”

Also, the possible move would leave St. John’s University as the only remaining Big East Conference school that does not sell alcohol at sporting events.

A permit was posted on Hinkle’s doors on Sept. 7 as a notice for a public hearing where fans can weigh in on if Hinkle should sell alcohol, as well as what regulations would surround the alcohol sales.

Regulations could include how many events, what specific events and if a time limit will be imposed on the sales.

Then, a committee will make a recommendation to a city-county entity, and then it will go to the state for approval.

Not everyone has been supportive of this decision. On social media, the feel is mixed. Some fans love the idea, while some fans hate it.

Melissa Iannuzzi, who graduated Butler with a strategic communication degree in December 2015, initially voiced her support for the alcohol permit on Facebook.

Iannuzzi, who purchased season tickets this season for the first time, said she thinks this is a smart move on Butler’s part.

“I get the heritage, but I think you have to be realistic,” she said. “People are going to partake in drinking before and after [games] anyway. Knowing it’ll be there will cut down on people binge drinking before the game.”

On the other side is a section of Bulldog fans who feel that Hinkle is not the place for alcohol. One person representing that argument is Jeff Leffew, a long-time Butler fan who has purchased season tickets for seven years and made numerous contributions to the Bulldog Club.

Once the news broke last week, Leffew said he was done with attending Butler basketball games. He cancelled his season tickets, asked for a reimbursement of his Bulldog Club contribution and emailed Collier.

“I felt broadsided by the news, honestly,” he said. “I had just renewed my season tickets plus made a contribution to the Bulldog Club. I’m one voice that wants to vote with his dollars.”

Leffew said his fear is that Hinkle Fieldhouse will lose the family environment that he said he has grown to love.

“Anytime you introduce alcohol into an event, you change the environment of the event,” Leffew said. “You increase the likelihood of changing the dynamic of the venue. Hinkle Fieldhouse is one of the few family venues I can take it my family in Indianapolis. I don’t have to worry about taking my family or clients and worrying about an inebriated person ruining my experience, spilling alcohol on me or in the hallways.”

The public hearing for the decision will be held in downtown Indianapolis on Sept. 18 at the City-County Council Building in Room 260 at 9:30 a.m.

“I don’t imagine it will change the experience at Hinkle anyway,” she said. “I don’t think people go to Hinkle to get drunk, they go to watch basketball.”

Leffew said Collier replied to his email and the two will be meeting soon so Leffew can voice his displeasures. Leffew also said that if Butler is granted an alcohol permit for Hinkle Fieldhouse, he promises never to return.

“I will follow the team, I will support the team, because this isn’t their fault,” Leffew said. “I can’t support the leadership making this decision.”