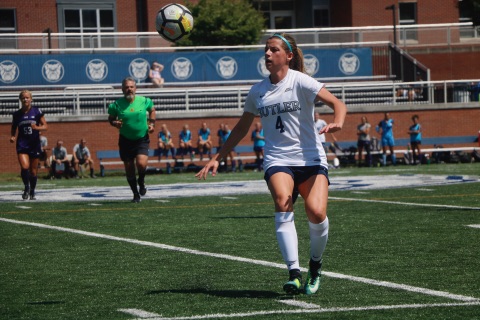 Junior Page Monaghan eyes the ball in an exhibition game.

Butler women’s soccer team notched their second win of the season in their home opener over Bowling Green State University 2-0.

The game went scoreless through the first half. The only major scoring chance in the first half came from junior forward Paige Monaghan in the 12th minute, when she got three consecutive shots on goal. The first was blocked by the Bowling Green defense, while the next two were knocked down by Falcon goalkeeper Victoria Cope.

Freshman forward Caitlyn DiSarcina scored the first goal of the game in the second half in the 72nd minute. She was assisted by junior forward Breann Pempek who made a pass that led to the breakaway goal. The goal was DiSarcina’s second goal of the season in four games.

“The goal today just made my confidence level go up,” DiSarcina said. “Hopefully those two goals under my belt will give me more confidence going into league play.”

Caitlyn DiSarcina gets the first goal of the match and gives #Butler a 1-0 lead. pic.twitter.com/juT7BR6cvU

Just three minutes later, freshman midfielder Elena Gutlove scored her first collegiate goal from 15 yards out. Gutlove was assisted by freshman defender Julia Leonard and junior midfielder Gabrielle Lemkuil. Gutlove was on the right side of the box when she received the pass from Lemkuil.

“She just looked up, we made eye contact, and I just raised my hand,” Gutlove said. “She made an awesome ball right to my feet, and I just stayed composed and put it in the back of the net.”

Redshirt sophomore Hannah Luedtke got the start at goal for the Bulldogs. She was relieved after the first half by freshman goalkeeper Leonie Doege. The pair combined for the shutout, each making one save in the game. It is Butler’s third shutout in four games. Co-head coach Rob Alman said he is incredibly confident in the group of goalkeepers.

“There are four goalkeepers on the roster, and we can play any of the four of them,” Alman said. “They work incredibly well together, and they push each other to get better every day.”

The Bulldogs dominated the shots column in the match, out shooting Bowling Green 18 to nine. Monaghan led the team with six shots. The Butler defense was strong throughout, only allowing the Falcons to get two shots on goal.

“We have a great back line and is just full of different people,” Monaghan said. “They really work together. They do a lot of stuff on their own. They really go that extra mile.”

The win moves Butler to 2-1-1 on the season. The Bulldogs have a pair of games at the Sellick Bowl this upcoming weekend, on Sept. 1 at 7 p.m. against Eastern Michigan University and on Sept. 3 at 4 p.m. versus Cleveland State University.