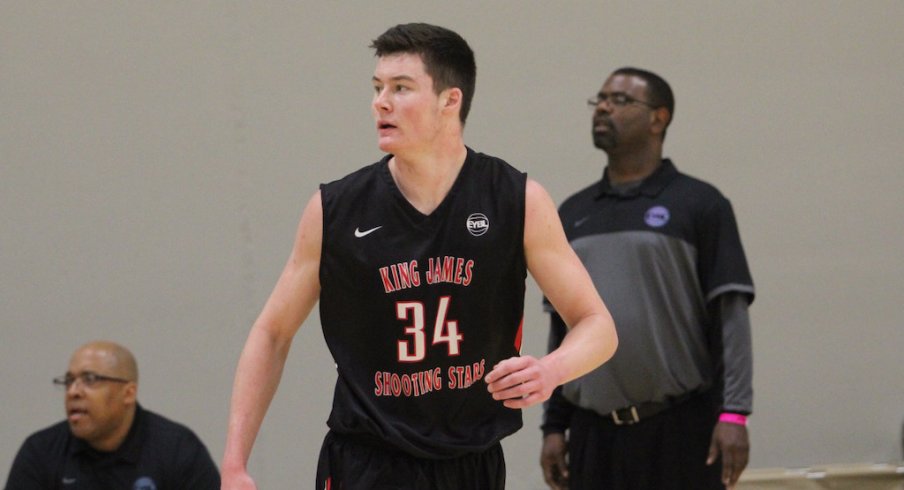 As of Thursday morning, the dominoes were falling for new Butler University men’s basketball head coach LaVall Jordan. Four of the five recruits that committed to Butler before Chris Holtmann’s departure had re-committed themselves to the program.

Jordan has had a busy first week at the helm of the Bulldogs, traveling from recruit to recruit in order to convince them to stay around.

It didn’t take long for incoming freshmen Cooper Neese, Aaron Thompson and Jerald Gillens-Butler to reaffirm their commitments, as all three announced within a day of the coaching change they would be staying at Butler.

Jordan’s next victory came after a trip up north to visit four-star recruit Christian David of Vermont Academy. The task to retain all of Holtmann’s recruits continued to be a success, as David confirmed that he would indeed be sticking with Butler

The fifth and final recruit from Massillon, Ohio, had other intentions.

Kyle Young decided to follow Holtmann and his staff to Columbus, Ohio, and join the Buckeyes. Young took to Twitter to announce his release from Butler.

“I would like to thank Butler University for their interest in me through this entire recruiting process,” Young said. “Although this has been a very difficult decision, I have asked for and received my release from Butler.”

Young went on to explain how his relationship with Holtmann and former Butler assistant coach Ryan Pedon, who followed Holtmann to Ohio State and was the main pursuer of Young throughout his recruitment, was a big reason for the departure. Young’s decision to attend Ohio State was also largely in part due to recent family struggles. His father, Mark Young, Sr., passed away in 2015 after a 28-year battle with multiple sclerosis.

“Through these difficult times, I grew very close with Coach Holtmann and Coach Pedon,” Young said. “I could not be more excited to announce that I am staying home to play for Coach Holtmann and the Ohio State Buckeyes next season.”

Young’s departure to Columbus was great news for some, but terrible news for Butler fans. He was the headliner of the highest-ranked recruiting class in school history. Young was the No. 86 ranked recruit in the nation and No. 2 in Ohio, according to ESPN.com.

After Young’s release, Butler’s class ranking plummeted from 28th to 58th, according to 247sports.com.

Now the Bulldogs will face problems with their lineup this year and for years to follow.

Most Butler insiders projected Young would be a starter right away, as his 6-foot-7 frame would have surely served the Bulldogs well in the frontcourt and on the wing opposite senior Kelan Martin.

His size also made him stand out from the rest of his former class at Butler. Three of the four remaining recruits identify as guards and are measured under 6 feet 4 inches. Butler will now look to find quality production at forward to match their backcourt.

The leader of the forwards will be Martin, the Bulldogs’ top scorer last season. Now with the absence of Young from the 2017-18 roster, one question remains: how will Butler match Martin’s scoring production on the wings when he is out of the game?

This is the role Young would have thrived in if he had chosen to stay. Coach LaVall Jordan will now have to look up and down his roster for an answer, but there are players currently in the Bulldog locker room that could fill this role.

Sean McDermott, the sharpshooting redshirt sophomore will have ample opportunity to take on this role. McDermott has both the size (6 feet 6 inches) and offensive talent to help provide scoring off the bench. His fluid shot makes him a threat from anywhere on the floor that opposing teams will have to respect. McDermott had a decent shooting percentage last season with 42% of his shots falling including 36% from three-point range, although he only averaged 10.7 minutes per game.

Athletically, there are few players on Butler’s team that stack up to Henry Baddley. The 6-foot-4-inch sophomore showed off his explosiveness in spurts off the bench last season, and now it is time to see what he is truly capable of. Butler fans did not see a lot of Baddley last season due to a loaded backcourt with Kethan Savage, Avery Woodson, Kamar Baldwin and Tyler Lewis all seeing most of the minutes. Baddley averaged 0.8 points per game while playing just 4.9 minutes per game in 2016-17.

Now with the departure of five seniors and the de-commitment of Young, Baddley could see a serious increase in minutes in 2017-18. On the wing, he can help defensively by using his speed and athleticism. Offensively, he must prove himself early in the season to carve out his role.

Although McDermott and Baddley are good pieces to have in the interim to fill the wing role off the bench, what happens when Martin graduates next May? Young was supposed to be the long-term answer and replacement once Martin moved on from Hinkle Fieldhouse.

Whether it is through recruitment or transfers, Butler must find wing players to fill the void Martin will leave once he graduates in 2018.

Don’t forget there are plenty of young, talented players rolling into Hinkle Fieldhouse this fall who could all make an impact immediately for the “new-look” Bulldogs.

One player in particular, Vermont Academy’s David, is expected to impress the Butler faithful. David, the only other four-star recruit in the class, has worked tirelessly to expand his game after an ACL injury that sidelined him at the end of his junior season. If David’s knee does not cause him more problems, he could see his name in the starting lineup early on in the season.

These players could make it difficult for Jordan to figure out his rotations and personnel groupings at the beginning of the season. This is where Jordan will rely on his veterans to help breed this young generation of talent for the Bulldogs.

Although Jordan has to find answers on the bench and on the wings, the first-year Butler coach still has veteran talent in the frontcourt and backcourt to lead the charge. This means that Jordan has options. He has the option to go with a size-heavy lineup with the trio of Joey Brunk, Nate Fowler and Tyler Wideman. On the other hand, he could also incorporate a small lineup with his bench full of guards, a tactic used by Holtmann last season.

However Jordan decides to use his team, it will be tough to recreate the success the Bulldogs had in 2016-17. Now with Young’s departure that task becomes even harder. To have a successful season someone will need to step up and fill the void left by Young and the graduating seniors. Will It be Baddley? McDermott? David? The job is there for them to take, it is just a matter of who is ready to be the next man up.