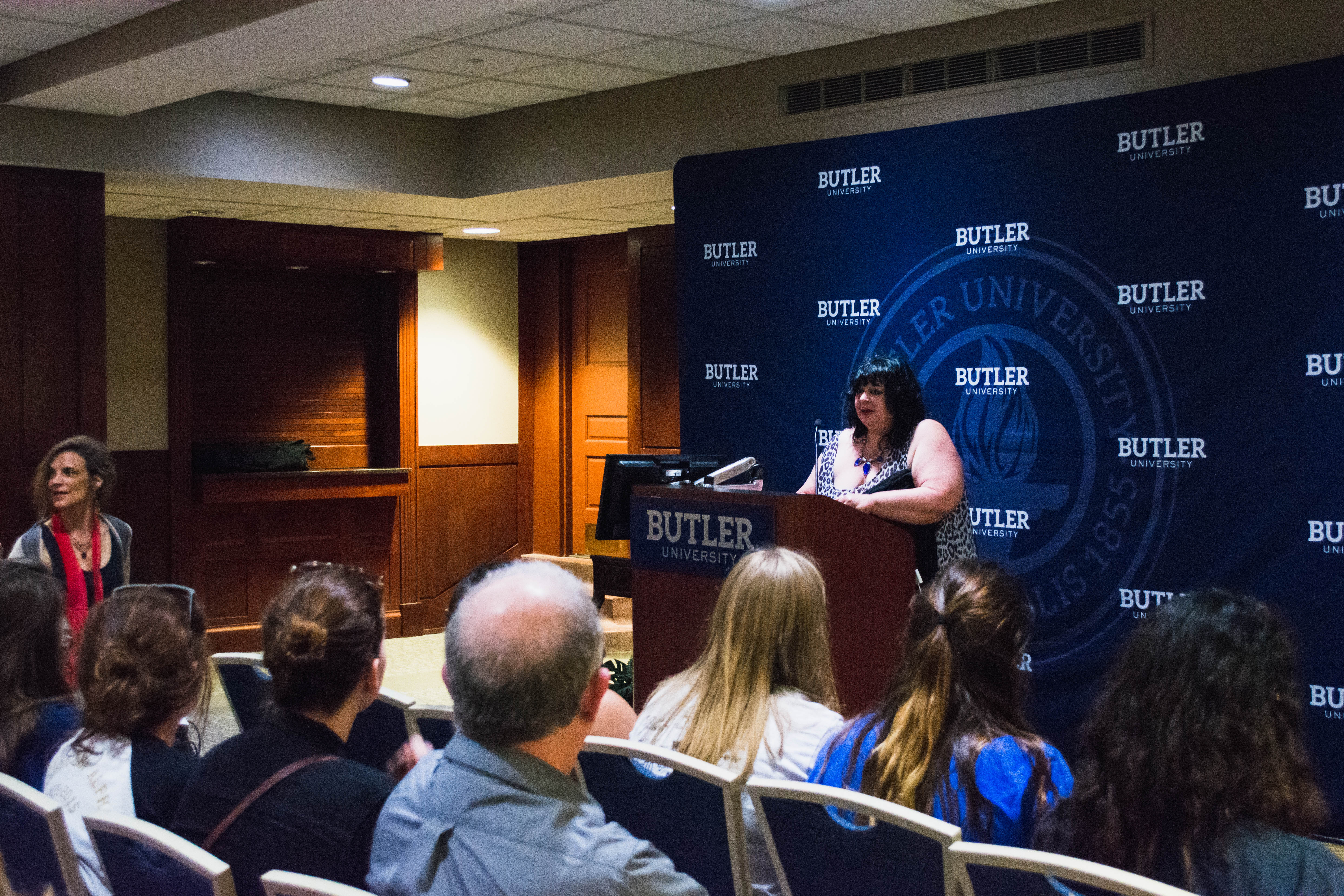 Diane Seuss, a 2016 Pulitzer Prize Finalist and American poet, was the final speaker for the 2016-17 Visiting Writers Series.

Seuss was born in Michigan City, Indiana, and raised in Edwardsburg and Niles, Michigan. Later, she graduated from Kalamazoo College and then Western Michigan University, where she received a master’s degree in social work.

Seuss is the author of three poetry books. Her first, “It Blows You Hollow” was published in 1998, and was followed by “Wolf Lake, White Gown Blown Open,” which received the Juniper Prize for Poetry in 2010. Her third book, titled “Four-Legged Girl,” was a Pulitzer Prize finalist in 2016.

On top of writing these books, Seuss served as the MacLean Distinguished Visiting Professor in the English department at Colorado College in 2012 and is currently writer-in-residence at Kalamazoo College, where she has been a faculty member since 1988.

The Ford Salon was packed to capacity as everyone awaited Seuss’s arrival. She came in through the main entrance and was welcomed by her friends and peers who were waiting to hear her popular poems read in person.

Kristen Odorico, first-year elementary education major, said she came for her Perspective in the Creative Arts class, The Art of Poetry.

“We read poems from her book, ‘The Four-Legged Girl,’ so I’m excited to hear what she has to say about it,” Odorico said.

After a few brief introductions, Seuss went up to the podium to the sound of applause.

She jumped into her first poem of the night, reading exactly as the poem was intended to be read. She emphasized the words, pauses and phrases, just as they had been imagined in her head.

In between readings, she cracked jokes regarding her poems varying content, whether it was laughing at her past experiences, gory content or everyday experiences.

“Poems, I think, arise out of everyday s***,” she said as everyone laughed.

Some poems were introduced with a short anecdote, telling the reason or inspiration for the poem. She introduced her poem “Warhol’s Shadows” by telling her story of living on the Upper East Side of New York and viewing random art shown on Sunday’s. That particular Sunday, she wandered into Andy Warhol’s exhibit. The first line of the last stanza of the poem reads, “Warhol was there, a column of chalk at dead center of the gallery.”

After her longer works, she moved on to her newer writing, including a series of unrhymed sonnets.

For her last poem, she read “Still-Life with Turkey,” which will be a part of her next book, and concluded with a communal applause from the crowd.

In the question and answer section after her readings, someone asked her who were her inspirations in writing.

“Walt Whitman, Emily Dickinson, John Keats, William Carlos WIlliams, just to name a few,” Seuss said. “There’s so many, I read all the time. If you are stuck as a writer, read.”

More questions were asked about her writing and editing process, from where she draws influence and more technical questions about specific pieces of work.

After her speech, Zach Sterrett, first-year sports media major, said, “I thought she picked out really good poems that provided her insight to the world.”

Near the end of the evening, Seuss stressed the importance of reinvention.

“Even if you aren’t a writer, or a musician, or an artist, it’s always important to keep reinventing,” she said.

The Visiting Writers Series will continue in the fall.