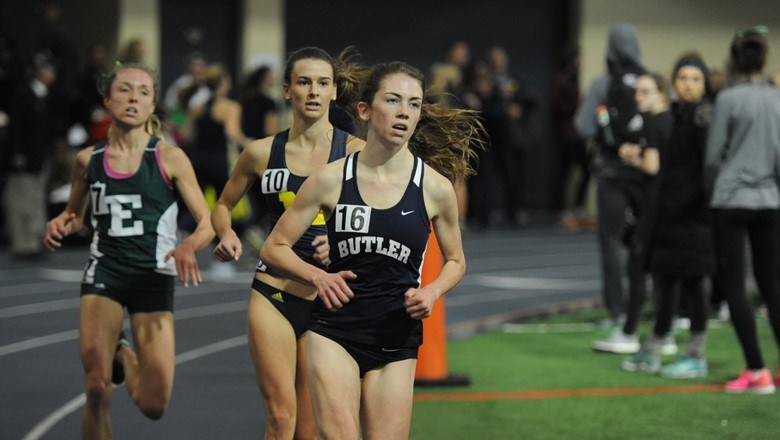 Senior Olivia Pratt leads a pack of runners in a meet earlier this year. Photo courtesy of butlersports.com.

“Keeping yourself accountable when no one else is.”

This is what senior track standout Olivia Pratt believes Butler University track and field has taught her throughout her career as a Bulldog.

Pratt makes sure to put in extra work — even if no one is watching.

“When you watch a race it’s exciting, but it’s just the tip of the iceberg,” Pratt said. “Underneath it is just hours and hours of training that nobody sees. Sometimes this means waking up early to run 10 miles with my team, then after class I run another five miles, and nobody sees it. But I do it.”

Butler track coach Matt Roe said it is important to put in your own work in order to be successful at a high level.

“To be at a high level, you have to live the lifestyle, which is a specific lifestyle to be an elite distance runner,” Roe said. “A lot of that is the 22 hours a day that are away from practice, not just the two hours that you are at practice.”

This work ethic is what makes Pratt the successful runner she is. From her freshman year, Pratt made a name for herself by winning her first-ever collegiate race. Fast forward to her final year at Butler, and Pratt has racked up plenty of first-place trophies, has been a three-time All-American and holds a school record in the 5000-meter run.

And her senior year is far from over.

Entering outdoor season, Pratt’s goal is to make the outdoor nationals and rack up as many school records as she can.

Pratt also had the opportunity to compete at the North America, Central America and Caribbean Athletic Association under-23 championships in San Salvador, El Salvador last summer where she ran against a diverse group of athletes. Pratt finished the 10,000-meter race in 12th.

Pratt said her favorite part was meeting the elite athletes she faced.

“It was such a surreal experience,” she said. “I think the best part was hanging out with the other athletes from the USA. They were so incredibly talented.

“For the most part they chose the top two from every event in the country, so multiple Olympians were just hanging out. It was just so cool, so now at nationals and other elite meets I can see the people I traveled with and raced against. It’s really cool to have that camaraderie even though it was only for five days.”

With this experience, Pratt  is a leader both on and off the track, which sets a good example for younger teammates.

“I’m not a leader because I’m fast,” Pratt said. “But because I try to reach out and plan team activities like a team dinner and getting the other seniors involved.”

Teammate and roommate Katherine Turner agreed Pratt is a leader, because she organizes events that bring the team together.

“She puts a lot of effort into leading the team and making sure the freshman feel welcomed,” Turner said. “We have a ton of events at our house like brunches and dinners, which just get the girls ready for meets. I definitely think the younger girls look up to Olivia.”

Roe, who has coached Pratt her entire collegiate career, said Pratt is a leader by example.

“She has definitely been about to lead by example,” Roe said. “She is able to show her teammates how hard you have to work and how specific you have to be in your approach to compete at an elite level.”

The future is bright for the Butler distance runner. Pratt, a political science and gender, women and sexuality studies double major, is still figuring out her plans but hopes to start an AmeriCorps program in Indianapolis for a year, which is designed to help the community in multiple ways. Eventually, she wants to attend graduate school and study urban planning, which involves designing infrastructure for large cities or towns.

As for running, Pratt wants to keep the activity as a part of her life. Pratt has also been a cyclist since she was 15. She said she wants to pursue a triathlon, a competition that involves running, swimming and cycling, in the future.