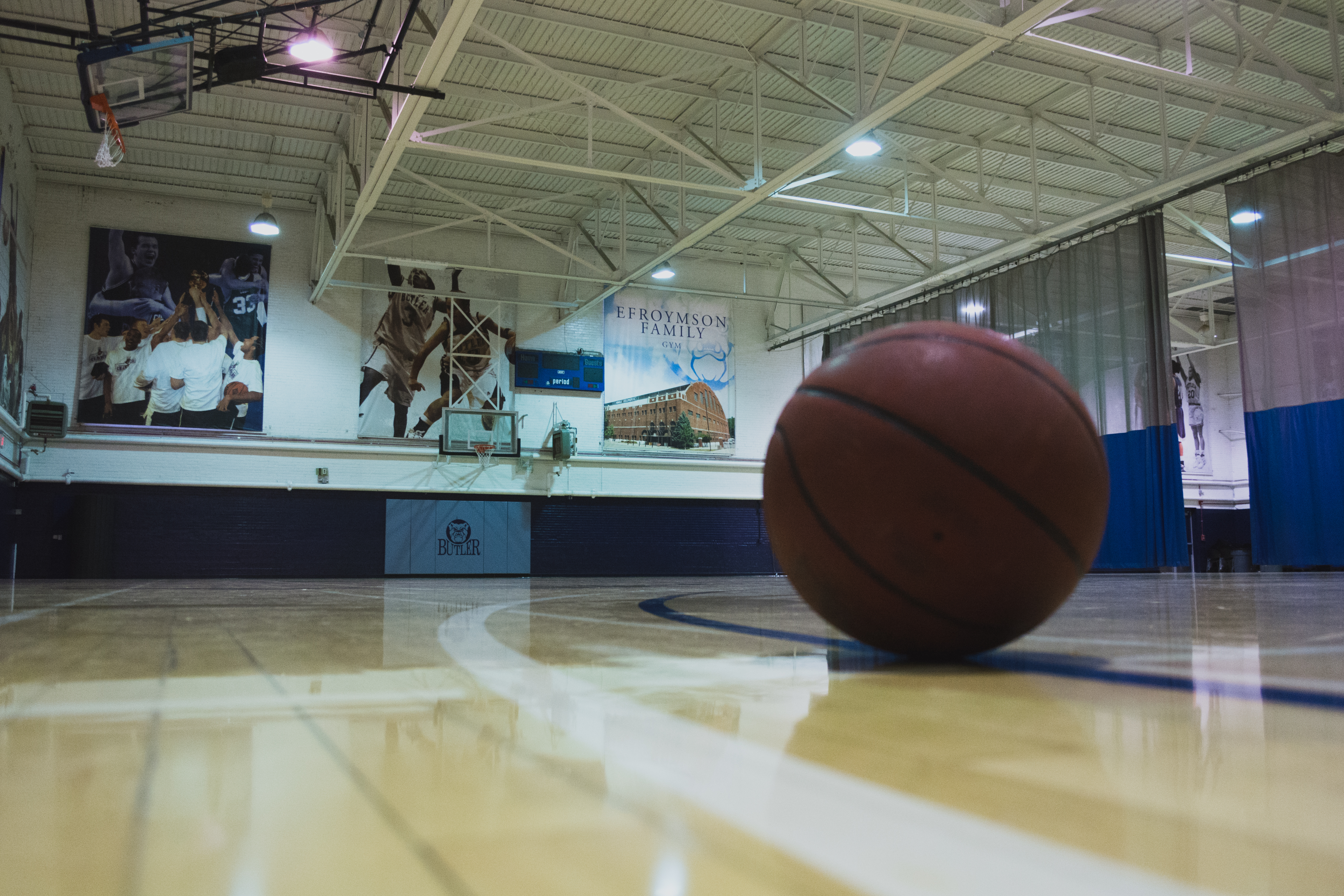 A basketball rests on the floor of the West Gym in Hinkle Fieldhouse. Photo by Adam Cvik.

Club sports are known to use Hinkle’s main court as well as the Efroymson Family Gym, also known as the West Gym. But lately, Hinkle is too crowded to support Butler’s club teams.

Hinkle is the hub for numerous sports organizations on campus such as men and women’s basketball and volleyball teams. With 20 varsity sports, practice slots and times can be tough to schedule once the weather gets worse and the seasons grow deeper. Aside from the varsity teams, there are also 17 club sports organizations fighting for this space.

With all of these teams wanting to practice regularly, there is limited space that each team has to practice. The club teams greatly affected include ultimate frisbee, men and women’s club basketball, volleyball and men’s lacrosse. All these teams need an indoor court of some sort to practice on and run plays.

Along with men and women’s basketball, the dance and cheer teams have needed space in Hinkle to practice, sometimes late at night.

With Hinkle crammed, teams have to travel to the Bubble, where tennis teams play and practice, or the Health and Recreation Complex to hold practice. This makes it difficult for the scheduling staff within Butler athletics to find room for everyone.

“It’s a pretty complex puzzle,” associate athletic director John Dedman said. “In terms of some seasons, whether it’s basketball season versus the fall or spring when the weather is nicer, there is probably more access [to Hinkle]. But when the weather is cold or snowy, a lot more groups want in here.”

With the recent bad weather, clubs on campus are having a very hard time finding places where they can practice within the tight schedule of Hinkle.

The weather does not only affect the teams that need practice, it also affects the people who like to play on the courts at the HRC. With club teams using all the court time, intramural teams have a hard time practicing on the courts.

“The West Gym being unavailable to us as club sports has been really unfortunate,” Morgan Miller, president of women’s club basketball, said. “We practice right up until the HRC closes, and often leave no open gym space for anyone else. We are constantly having to kick people off who are just playing pick-up, which is unfair to them because they pay for that court space just as much as we do.”

Outside of the basketball realm, this weather and non-ideal scheduling has led the ultimate frisbee club team to some hard measures when it comes to practice.

“We have a very late practice,” Alex Sottile, president of the ultimate frisbee club, said. “We are in the Bubble, and the tennis nets prevent us from running full field drills and such, but we make do with the room we have.”

With the weather getting better and basketball season done, club teams are hopeful their nightly journeys to the Bubble and the HRC and their squished time slots come to an end sooner rather than later.