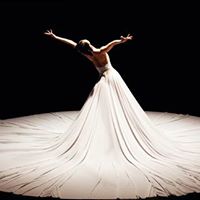 Jessica Lang, the choreographer and artistic director of the company, is a Juilliard graduate and former Twyla Tharp Dance Company dancer. She is most renowned for being a choreographer creating more than 95 works for companies worldwide, from American Ballet Theatre to Birmingham Royal Ballet to the National Ballet of Japan.

Upon receiving the Joyce Theatre Artist Residency, Lang was able to launch her own company in 2011. This year alone it has toured to 29 cities, including Indianapolis.

The class consisted of a ballet warm-up and guided improvisation, followed by repertory. The students in the class were able to learn excerpts of choreography from “Thousand Yard Stare,” part of the show for Saturday night.

“The  [‘Thousand Yard Stare’] was really meaningful to [Lang], and she encouraged us to do it with as much emotional feeling as possible,” senior dance major Jessie Philbrick said.

This made the class “feel less intimidating and less like an audition, and more like something special,” as Philbrick said.

“Thousand Yard Stare” is a work Lang created in 2015, drawing inspiration from veterans she interviewed. As Lang states in a promotional video, “‘Thousand Yard Stare’ was really an impulse about war and those affected by war.”

The costumes for “Thousand Yard Stare” actually incorporated drawings from the veterans Lang met, allowing them to “participate in the creation of the art as well.”

Olivia Holabird, a first-year dance major who attended Saturday’s performance, said she was really struck by the detail of the drawings on the back of the dancer’s costumes.

“It’s like they were all the same from the front, all completely uniform, but when they turned around you could see their humanity,” she said.

Other pieces in Lang’s Saturday performance included “Solo Bach,” a light and airy dance solo to works from Bach’s “The Six Sonatas,” and “Sweet Silent Thought,” a work inspired by Shakespearean sonnets. It also featured “The Calling,” involving a single woman constrained by the vast pool of her white dress, and “Tesseracts of Time,” a work in four movements that intermingled video and live dance.

It’s not often that New York dance companies tour in Indianapolis, but to many students in the audience, particularly those in Butler’s dance program, it was a great learning opportunity.

“I always love seeing guests artists come in,” Holabird said during Saturday’s performance. “Because there’s something about seeing different dancers and different choreographers that inspires you to want to learn and create more yourself.”