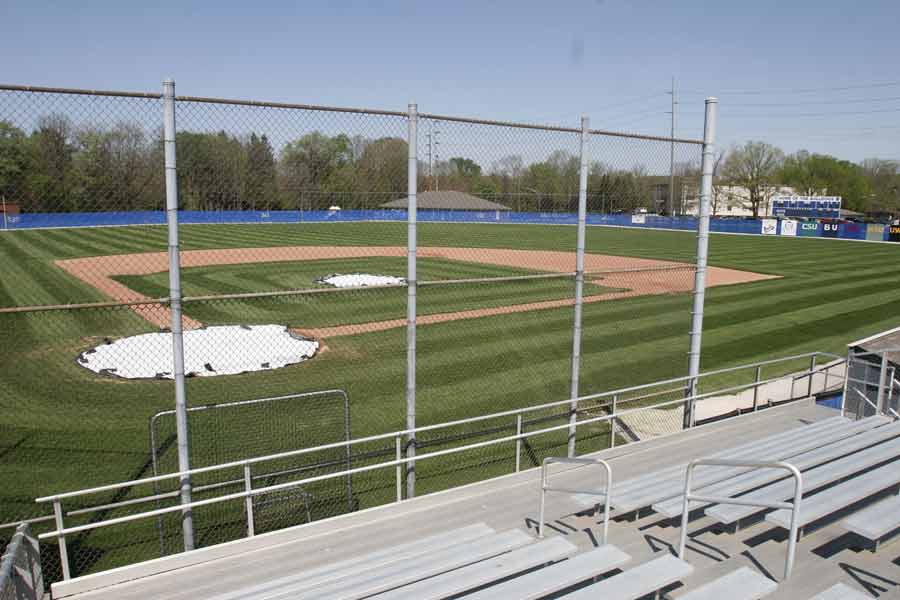 In the spring of 1999, the Northern Illinois University Huskies baseball team finished their season 4-51-1 with a 1-31 conference record. Head coach Frank Del Medico was fired and the program looked like it was dead. Until Dave Schrage, new Butler baseball head coach, took over in 2000.

Schrage came into the Northern Illinois program not knowing what to expect. After just one conference win and four wins total, the players had stopped believing in themselves, and it looked like the Huskies baseball program was on track for a rough decade.

Schrage, on the other hand, thought differently.

The Chicago native came in with the mindset that the Huskies would set a new culture and stay committed to the basics of the game. In his first year in the Northern Illinois dugout, the Huskies won 24 games. Then in 2001, they posted their first winning record since 1977 after going 28-27.

“The thing that stands out the most was that the kids as a team came together,” Schrage said. “I didn’t wave a magic wand. It was a process of them getting some confidence and belief in themselves. We won the first weekend of the season, and you could just see the relief in their faces.”

Now, almost two decades after taking the Northern Illinois job, Schrage is at Butler. He said it was the right time to come to Butler for a few reasons.

“First of all, both of my daughters live in Indianapolis and my oldest daughter graduated from Butler,” he said. “The second thing is the challenge of building a Big East champion and finally I’m a big believer in private insitutions like Butler. The move to the Big East has built Butler’s brand over the past few years.”

Schrage accepted the head coaching position at Butler when Steve Farley was fired after 25 years at the helm. After a 14-40 finish to last season, Athletic Director Barry Collier  made a change.

Since Butler baseball joined the Big East, they have yet to have a postseason berth. Furthermore, they have not had a winning record since 2003. Collier found his man in Schrage, who coached the past four years at South Dakota State University.

The veteran of college baseball also has

prior experience in the Big East Conference. Schrage was the head coach at the University of Notre Dame from 2007 to 2010. He also played college ball for the Creighton Blue Jays as an outfielder from 1980-1983. Schrage knows hat to expect in the Big East, although it has significantly changed since his days at Notre Dame.

“It’s a unique league because of all the different styles in the conference,” he said. “When you play at Creighton, you need good pitching and defense. When you play at Xavier and Georgetown, it’s all about hitting. There are good coaches in this league. You have to be prepared to play anywhere you go.”

Butler only started to practice and meet as a team about a month ago. There is overhaul all over the program compared to last season. Schrage brought in his own coaching staff — some of whom he coached — and culture of how he wants things to work.

Schrage and the coaching staff, in a short time, have created their own culture in the Butler baseball program. Many players are already buying in. Junior outfielder Gehrig Parker said he likes what he sees so far out of his new coach.

“I was really impressed upon meeting Coach Schrage just to hear about his past success and running track record of coaching at quality programs as well as coming into programs that hadn’t had much success the year before and turning them around,” Parker said. “He is really trying to establish a winning culture in our locker room, and he is instilling a belief in us that we have what it takes to be the best in the Big East.”

Schrage has been the head coach at seven programs. He said a situation that sticks out to him most in his career, like the current situation at Butler, is when he was at Evansville. Both schools are in Indiana and are relatively small, but his comparison is in how the team is built.

“We had the ability scholarship-wise to get good recruits at Evansville, but when we won the Missouri Valley Championship, we had about 12 players from southern Indiana,” Schrage said. “Now, baseball in Indianapolis is phenomenal. We have the ability to recruit national and can also keep the good Indiana players at home.”

New recruits are only one part of the change that comes with a new coach. Taking over for Farley who coached for 25 years, Schrage said he respects his work, but a program must always be moving to win.

“When a new coach comes in, we have to establish our culture and how we want things done,” Schrage said. “You will not find a better human being than Steve. That aside, when I come in, I have to start a new tradition. When a new coach takes over, the question is are the players going to buy into what you are doing. At this point, they’ve had a great attitude and work ethic.”

Butler lost a third of their games by only one run last season. In many of those games, the Bulldogs lost their lead late in the game. Schrage said he emphasized completing tasks, whether it is during a workout, off-field duties or an actual game.

Bulldog players said they embraced this new mindset. Many see it as a breath of fresh air or a clean slate. They have a whole new coaching staff to get to know and impress.

“Players have been held to a higher standard in regards to accountability and doing the little things right,” Dattolo said. “The organization and overall mentality behind the coaching staff is well planned and extremely structured. The overall teaching aspect of the game has been the biggest change in my mind, and I really believe that is going to be what separates us as a team from last year.”

Schrage said the Bulldogs will be a team from which many teams across the country will not expect much, but he will embrace that.

“We’re going to go into every game and nobody is going to respect us or think we’re any good, and that’s a good spot to be in,” Schrage said. “There’s no pressure on us. So let’s go out, have fun and be the surprise team in the country this year. When you play teams and they underestimate you, we can turn that around and have the psychological advantage over them.”

As a coach who is old-school to the core,he puts solid pitching and defense first and then focuses on hitting.

“We’re going to try to drive the baseball offensively,” Schrage said. “You have to get other teams and pitchers on edge. You need to grind out at-bats and get pitch counts high to knock starting pitchers out of the ball game.”

Parker said he is a fan of Schrage’s mentality that focusing on the little things helps you win baseball games. He said the little things can include anything from warm-ups, running the bases or mentally preparing for games.

“I think that’s something that will be huge for us if we seriously want to contend in the Big East,” he said.

Above all, Schrage said he wants players who will work hard, have fun and play the game the right way every day. Knowing what it is like to be a college player who won, he said he knows what it takes to get a program back on track.

“I want the kid whose uniform is dirty at the end of the day and when he is at practice, he is focused and wanting to get better,” Schrage said. “To me, you’ve got to have a little kid in you when you’re playing. It’s a tough game to play. You have to have fun and enjoy yourself.”

The Butler baseball program has been revitalized. You see the passion in the coaches and players words when they speak of how excited they are to play this year. You see the smiles on their faces. You see how hungry they are to get revenge and win the Big East. Butler had a huge decision to make when they had to pick a new head baseball coach for the first time in 25 years.

They brought in a head coach who knows what it takes to win and how to bring a program back to life. Now, it’s just a matter of what we see on the field. If one thing is for sure, Schrage will have his team ready. And the Bulldogs will be plenty hungry for a conference championship when we seem them this spring.