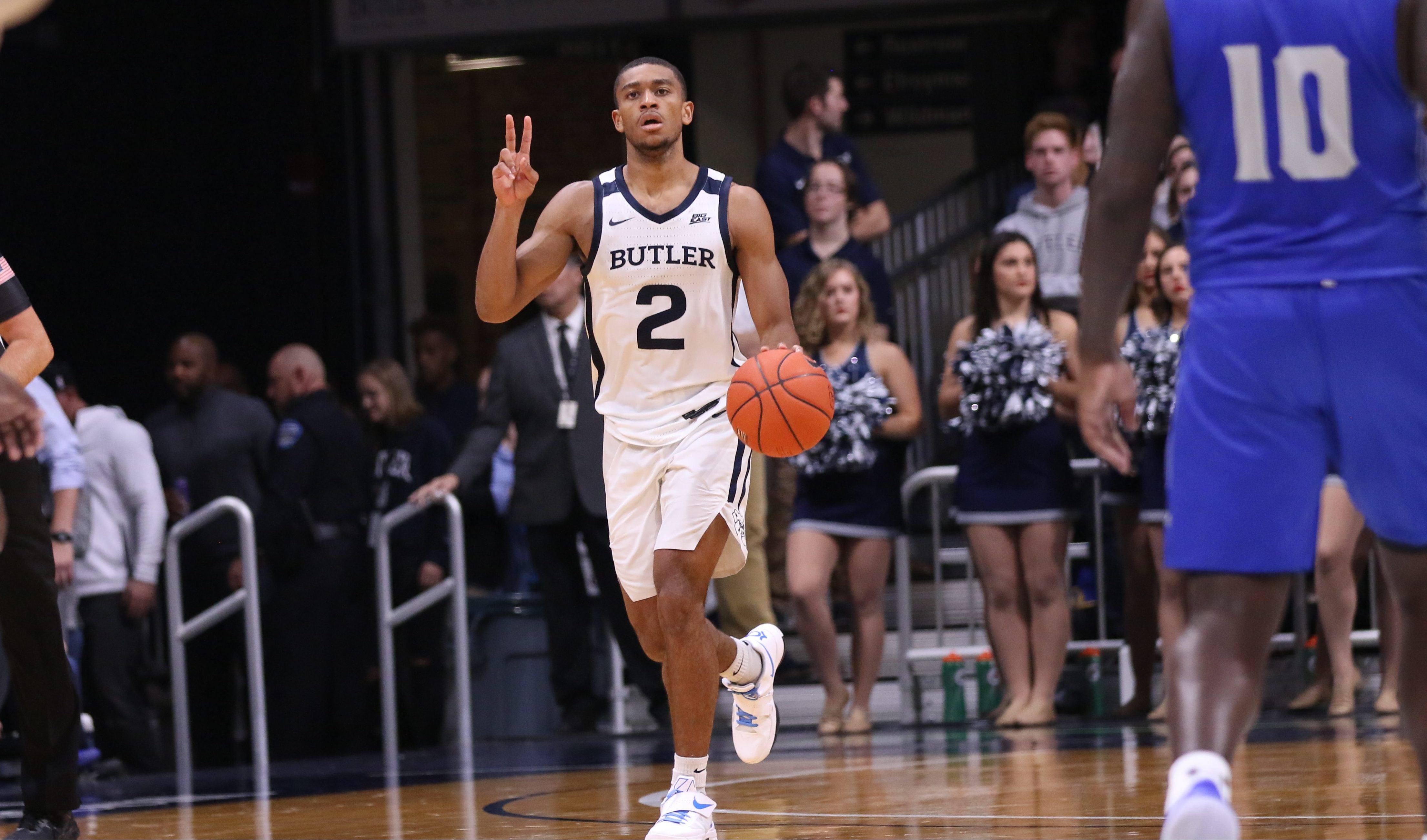 Aaron Thompson brings the ball down the court during a game this season. The Bulldogs take on Morehead State at 7 p.m. on Nov. 22. Xan Korman/Collegian file photo.

After improving to 4-0 to start the season for the first time in three years, the Butler men’s basketball team will look to keep its winning streak alive on Nov. 22 against Morehead State. The Eagles also began the season 4-0 before falling to the University of Missouri 70-52 on Nov. 20. Here’s what you need to know as the Bulldogs prepare for the final home game of the Hall of Fame Classic:

Who: Butler vs. Morehead State

1. Morehead State has a variety of scoring options at its disposal

Where there Eagles lack in offensive firepower, they make up for in scoring depth. Just two players – Jordan Walker and James Baker – are averaging double figures, compared to four for the Bulldogs. But six Morehead State players are averaging 7.8 points or more per game, and five are shooting 50% or better from the field this season.

Walker, an Indianapolis native who’s averaging 13.8 points per contest, is the biggest offensive threat for Morehead State. The senior has scored in double figures in 20 of the team’s last 22 games, but this season has only reached the 15-point threshold once. So while containing him will be important, Butler will want to focus its attention across the board to slow an offense that is averaging 77.4 points per game, a tick higher than the Bulldogs’ 75.8.

2. Both these teams defend the 3-point line well

Morehead State has held opponents to just 24.8% from beyond the arc this season, a mark 30th in the country. Butler, meanwhile, is 12th in the nation in 3-point field goal defense, with opponents converting on just 23.2% of such shots.

This is all to say that this could quickly become an interior-focused contest. Bryce Nze and Bryce Golden have both shown the ability to get to the basket offensively, but their defensive abilities could prove crucial against the Eagles, particularly in matching up against forward James Baker, who’s second on the team in points per game.

3. Butler needs to take care of the basketball against an Eagles team that forces a high rate of turnovers

All of the teams Butler has played this season are ranked outside of the top 200 nationally in turnovers forced, through games played on Nov. 20. That’s about to change with the Eagles, who force an average of 17.4 turnovers per game, tied for 62nd in the country.

After committing 16 turnovers in each of their exhibitions, Butler hasn’t had a double-digit turnover game since. In fact, the team’s 8.0 turnovers committed per game is tied for the second-best in the country.

One of those two things is going to give in this game. Limiting turnovers against Morehead State could go a long way towards both a victory and showing Butler’s ability to take care of the basketball is strong heading into tougher competition ahead.