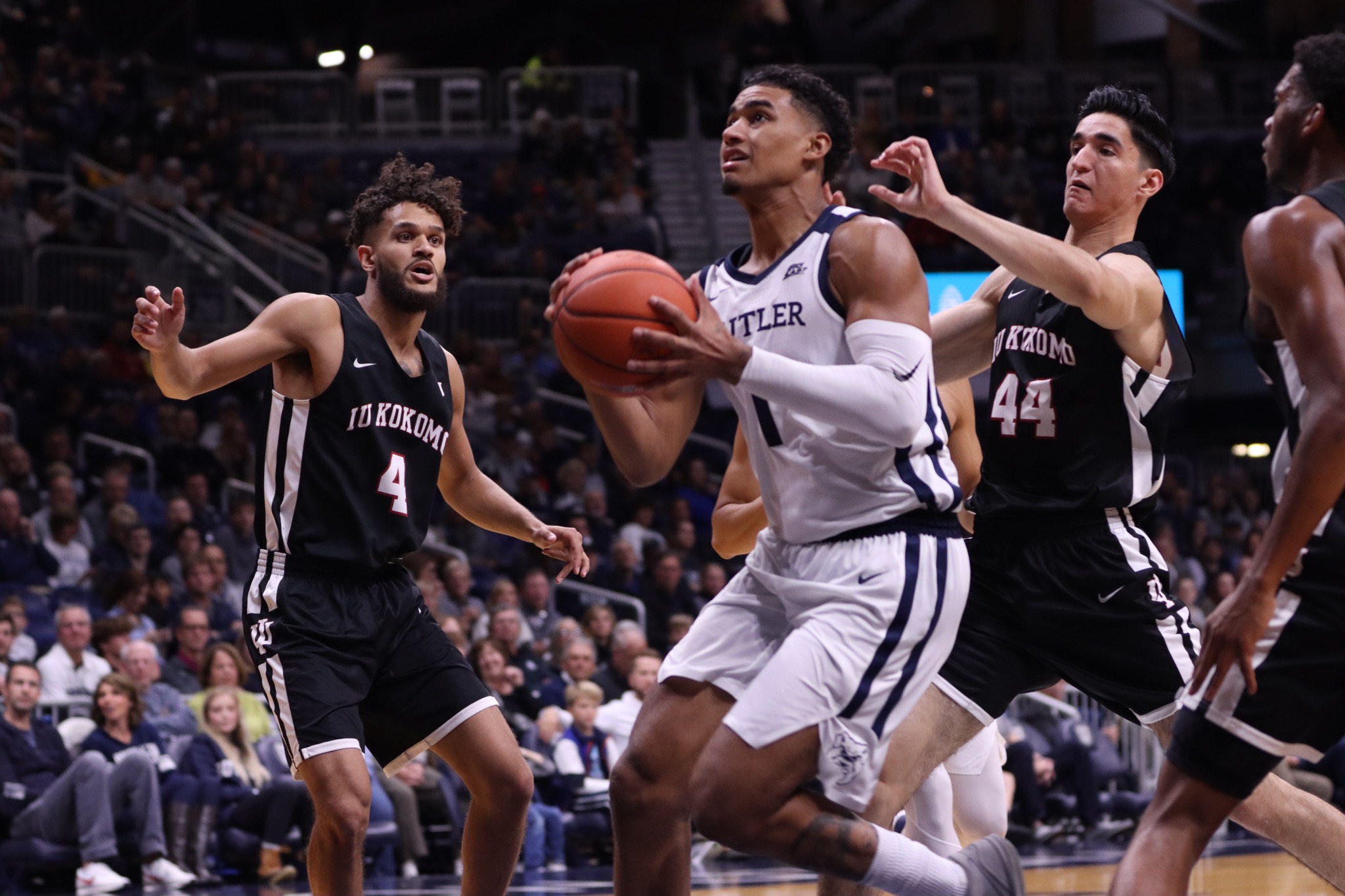 The Butler men’s basketball team began their 2019-20 season with a 70-40 exhibition win over the IU Kokomo Cougars. Sean McDermott led all scorers with 18 points headlined by 4-of-6 from the 3-point line. Take away what you want from the Bulldogs’ win over a top 10 Division II basketball team. With that being said, here are three takeaways from an expected win over the Cougars.

Jordan Tucker featured a dynamic offensive game, but his most important contribution was his seven rebounds.

Coming off the bench, Jordan Tucker made an impact the moment he stepped on the floor. He got to the front of the rim both in the half-court offense and in transition early in the first half while also knocking down a three and a pair of free throws. The Duke transfer finished with nine points and seven rebounds. While the offensive production is an important component of Butler’s success this season, what he did on the boards is the stat with the most implications.

If he continues to rebound this way it gives LaVall Jordan the luxury of throwing different lineups at Butler’s opponents. When Jordan rebounds, the Bulldogs don’t have to have both Bryce Nze and Derrik Smits on the floor at all times. Tucker’s offensive abilities make Butler much harder to guard on that end of the floor. Rebounding will be an important category to keep an eye on throughout the season. If the Bulldogs can do it without having to put both true bigs on the floor, this team becomes much more dynamic.

Bryce Nze was everything he was supposed to be, and more.

The narrative on Bryce Nze has been the same since he joined Butler as a transfer last season. He is a great rebounder that is active on the glass on both ends of the floor. He was exactly that tonight getting his hands on Butler misses and being an interior presence on the defensive end. Despite having just four rebounds, he was much more active than the box score suggests and could have easily been closer to six or seven boards.

Where Nze really impressed against the Cougars was his passing ability in the post on offense. He was third on the team with three assists and showed an array of passes. He found Jordan Tucker on the opposite side of the floor for a wide open three, hit a back door cutting Aaron Thompson for an easy lay-in and connected with a streaking Christian David for another assist. With the perimeter threats Butler has at its disposal, Nze’s passing is an important piece of this Bulldog offense.

Tonight, Christian David was exactly what he needs to be all season.

Christian David was all over the floor tonight. The junior finished with 10 points, six rebounds and four assists and his spark plug impact was more than what can be seen in the box score. Among returning players, David’s role on this team will see one of the bigger shifts. Last year, he only averaged 11 minutes per contest accompanied by 1.8 points and two rebounds. His box score contributions need to be better this season and they were against the Cougars. In 26 minutes, David’s 10 points and six boards are exactly what the Bulldogs need on a consistent basis this season.

David doesn’t need to blow anybody away with his stats, but an uptick in his tangible contributions along with his energy he brings off the bench adds another dimension to this basketball team. He has an ability to play high-level defense, can knock down a three and get behind the defense on the offensive end. It doesn’t need to be a huge jump, but a consistent increase in contribution will go a long way. That’s exactly what David did tonight.

There were a lot of good things going on tonight. A high-powered Cougar offense was held to just 40 points on 14 field goals. Butler forced 19 turnovers which resulted in 21 points off turnovers. They outrebounded IU Kokomo 43 to 28 including 12 offensive boards.

But, as expected, the Bulldogs were sloppy at times and have things to improve upon after their first exhibition. Butler saw just seven of their 22 threes go through the net and four of those came from McDermott. Kamar Baldwin was just 5-of-13 from the field for 11 points. While they forced turnovers at a high level, they had 16 turnovers of their own. Butler certainly showed positive signs, but don’t let the 30-point win sweep you too far off your feet.