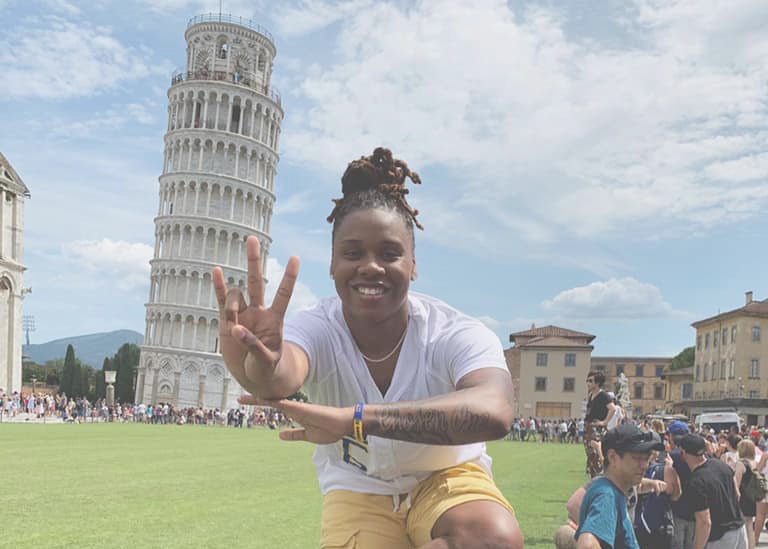 On the court, she’s Butler women’s basketball small forward. Off the court, she is the president of a historically African-American sorority, the creator of a basketball camp and a daughter.

Consistent throughout all her identities, senior Katherine Strong lives up to her surname.

“That’s pretty much it,” Strong said. “I just stay strong. And believe that I can do it. And I had the help and encouragement from others.”

On her forearm, a tattoo reads “The Chosen One.”

The title originates from the women of the Alpha Chapter of Sigma Gamma Rho. When Strong joined the sorority, she was the only member of her line, the equivalence of a pledge class, and received that name — “The Chosen One.”

As their friendship grew, so did the list of noticeable traits.

“Instead of letting any hardships or negative experiences bring her down, she’s been able to transition into such a caring and outgoing individual,” Long said. “They’ve accelerated her forward and I can’t wait to see where she goes next.”

Strong’s passions for service were amplified after becoming a member of Sigma Gamma Rho, where the value of community service and philanthropic culture of the organization allowed her to further her selfless endeavors.

“I have always been interested in service, even at my old school, just how they give back to the community and their involvement on campus, just showed the sisterhood they had,” Strong said.

To Long, this camp exemplified some of the Strong’s best qualities.

“Who do you know our age making moves like that, simply to help other people? I love that she’s been able to accomplish so much,” Long said. “She is able to cultivate passions within other people because she herself is so passionate about what she does.”

Strong accredits the inspiration that allowed her to develop such a successful basketball camp to the Indiana Fever, Erica Wheeler, LeBron James and above all, her mother.

Strong’s mother, Clarise Mitchell, has been a cheerleader throughout the entirety of Strong’s life, on and off the court.

When Strong was around seven years old, Mitchell bought her daughter a pair of skates, even though Strong did not know how to skate. Her mother wrapped pillows to cover her knees and behind with saran wrap for protection.

“She fell, but kept getting back up,” Mitchell said. “That’s just who she is, and by the end of the day she was skating.”

Mitchell said her daughter is often a source of strength for her, especially when confronting her own challenges, such as her struggle with arthritis.

Strong faced her own injury last season when she tore her ACL.

“She has shown me that just because things happen to you, you’ve gotta keep going,” Mitchell said. “She’s an inspiration to me too. I’m just so proud of her.”

Strong has tattoos the portray many of her life’s mantras, one of them being “only the strong survive.”

“Everyone has an obligation to choose what they want to do in life and how they want to do it,” Strong said. “So I take that, like, it’s my choice to go out there, stay positive and keep my head on my shoulders. And I believe in myself. I can do what I do.”