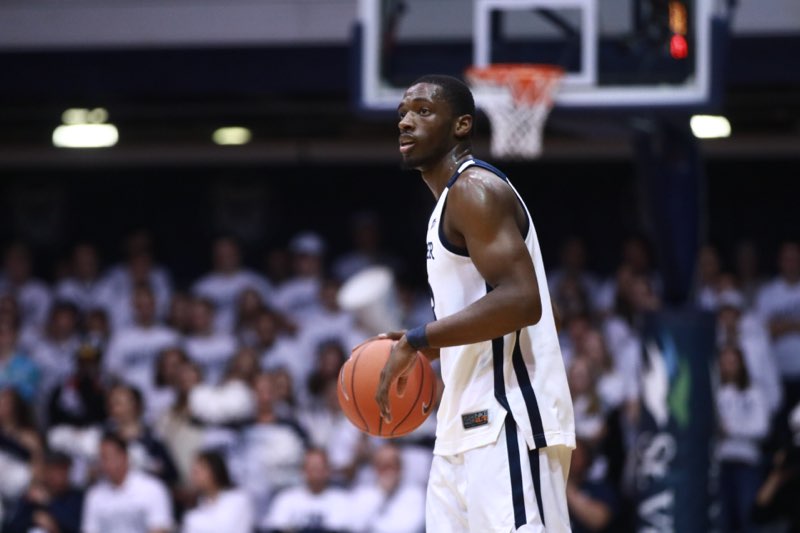 Kamar Baldwin looks for an open move during Butler’s 91-78 victory over DePaul on Feb. 16. Baldwin scored 25 points in the contest. Photo by Jimmy Lafakis.

In their first game at Hinkle Fieldhouse in two weeks, the Butler men’s basketball team came away with a 91-78 victory over DePaul, improving to 11-1 against the Blue Demons since joining the Big East. Here’s a look at 10 key quotes from after the game.

On his main takeaway from the game: “I thought LaVall had his guys really ready to play. The first few possessions they were pushing the basketball and running their offense at warp speed. We were trying to play catch up, and they got off to a really good early start.”

On Kamar Baldwin’s performance: “We had a difficult team keeping him in front of us early, middle of the game, and especially late. … He made really good decisions, whether for himself or his teammates.”

On the difference in the game down the stretch: “Whether it was our lapses on defense, or their efficiency in running offense — and then vise versa on the other end of the floor — that’s how they were able to extend that lead and keep it there.”

On Butler’s mindset going into the game: “We knew it was going to be a tough battle with … where both of us are in the standings, and coming off a loss, and having to just try to get back up, get back on the horse and keep fighting.”

Opening thoughts from coach Jordan after the win. pic.twitter.com/AW8q0oaloX

On contributions from the bench: “I thought as the game went on that our depth played a factor. … We had fresh bodies coming in and everybody contributed in a positive way, and we had talked about that prior to the game.”

On one major key to the victory: “Guys played together. We had 18 turnovers the other night. [We] bounced back and corrected it, worked on it, talked about it, addressed it, and only had eight tonight and 18 assists. So the ball moved and we found each other like we should.”

On looking forward: “I look at where we are, the last third of the Big East season coming up, I think our guys are excited to just attack and the goal is to go 1-0.”

On the impact of the team’s home loss to Marquette: “I think regardless of…any team that you play, if you get beat by a margin like that. And not only by how much we [lost by], how we got beat. You have to look back at yourself and say, ‘Are we doing what we want to do?’ I think we’ve attacked practice, and tried to change our mindset, and it’s showing right now.”

On the team’s strong offensive effort: “Coach gave us a good game plan. He came in and said, ‘All gas, no break.’ So we just went out there and executed. We played good collectively.”