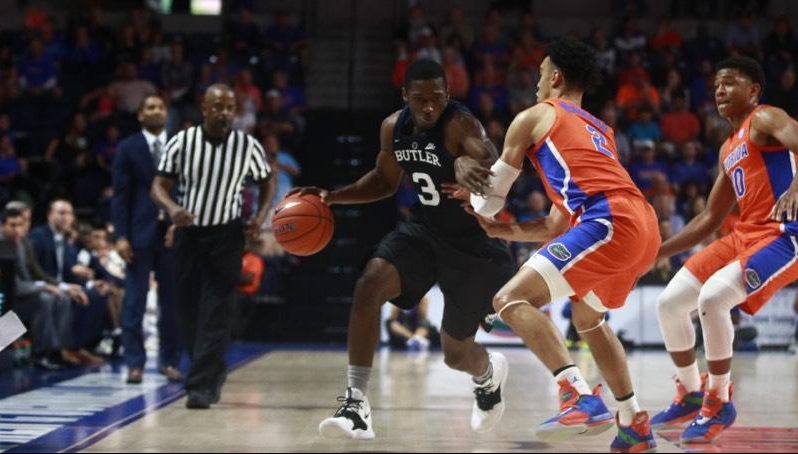 The Butler men’s basketball team closed out nonconference play with a 77-43 drubbing at the hands of Florida. The Gators scored the game’s first 21 points and were ahead by as much as 37 in the second half. Here are three takeaways from a dreadful defeat.

1. Butler got blitzed and didn’t have a response.

Eight minutes into the game, the Bulldogs were 0-for-9 from the floor and had already turned the ball over five times. To have any hope of staying within striking distance, they needed to be elite on the defensive end, which they failed to do. Florida scored 43 first-half points while shooting 64 percent from the field and 67 percent from three. The Gators came into the game averaging 70 points per game and were shooting 35 percent from deep. They’ve struggled offensively all season but looked unstoppable through 20 minutes.

Last season, Butler survived multiple horrendous starts by stringing multiple defensive stops together until the offense came to life. Not only were the Bulldogs unable to hold Florida in check, but the Gators had their third-best offensive showing to date. Florida played a terrific game and would’ve won if Butler was anything other than great. The larger issue is that the Bulldogs couldn’t make the necessary adjustments to cut into the deficit. When Butler faces adversity early in a contest in the future, the response has to be better.

2. Jordan Tucker is a piece, not the answer.

Tucker scored Butler’s first six points and hit at least two 3-pointers for the third game in a row. While he’s been a fantastic addition, the Bulldogs are still going as far as Kamar Baldwin and Paul Jorgensen take them. They contributed a total of 14 points, three assists, four rebounds and three turnovers against the Gators. Florida’s backcourt got the better of them on both ends of the floor. Any hope Butler had of winning this game disappeared with such an awful outing from its stars.

Unless Baldwin and Jorgensen are combining for at least 25 points, it doesn’t matter how well Tucker plays. Butler’s offense is built on preventing opponents from focusing on one player. The idea is wonderful when everyone is making shots but incredibly dangerous if that doesn’t happen. From this point forward, Butler is not going to win any game where its best two offensive weapons go 5-of-18 from the floor. Baldwin and Jorgensen have to work in tandem with Tucker and give the Bulldogs three legitimate scoring options.

3. The Bulldogs get a much-needed fresh start with conference play.

The nonconference portion of the Bulldogs’ schedule was certainly disappointing but not catastrophic. They still picked up two wins over SEC opponents and were perfect at home. Butler has no time to dwell on what could have been with a Big East opener against Georgetown at Hinkle Fieldhouse on Jan. 2. This team’s NCAA Tournament fate will rest on what the Bulldogs are able to do in conference play.

If Butler wins 11 or 12 games in the Big East, the loss to Dayton and demolition at the hands of Florida will be largely irrelevant. The Bulldogs have work to do but are very much in the NCAA Tournament discussion. Their first two Big East games are at home and contests they should win. The transition from nonconference to conference play came at a perfect time for Butler. It can’t afford to allow what happened in Gainsville to carry over into 2019 and Big East games.