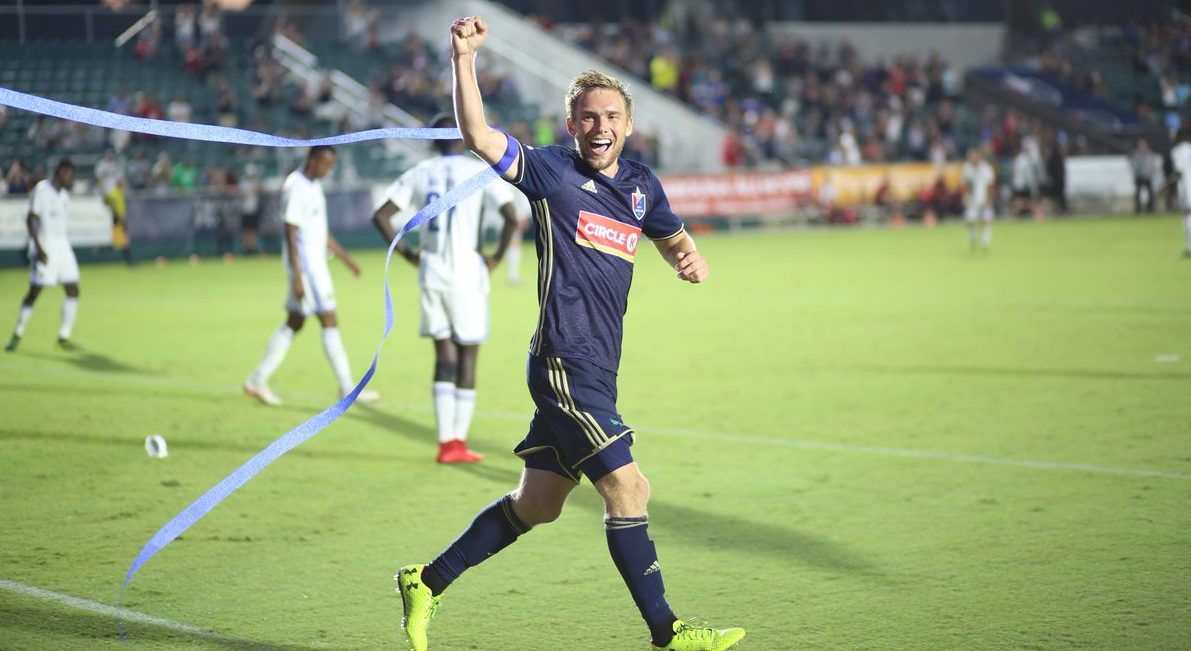 Zach Steinberger celebrates during a game with North Carolina FC. Steinberger scored two goals in his debut with the team. Photo courtesy of @NorthCarolinaFC.

On Aug. 25, Zach Steinberger kicked off a new chapter of his career by netting two goals and an assist in his debut for North Carolina FC. Debuts are nothing new for the 26-year-old, as this is his fourth team in as many years.

With North Carolina FC, Steinberger has scored four goals in his first seven games. All these statistics speak for themselves, but he has yet to find a permanent home to play on a regular basis and live out his dream.

Steinberger played four years at Butler before being drafted eighth overall in the MLS draft on Jan. 25, 2015, by the Houston Dynamo. Since then, he has experienced the harsh reality of being a professional soccer player in the U.S.

During his time at Butler, Steinberger played in 65 games, tallying 14 goals and 15 assists.

“He is one of those guys that is the heart and soul of a team,” Butler men’s soccer coach Paul Snape said. “He was an outstanding player while he was here and I think the whole nation knew that.”

Snape jokingly said Steinberger was such an inspiring leader that one day he could run for a Senate seat or be a salesman on a QVC channel.

“He was a great player, but an even better person,” said David Goldsmith, Steinberger’s teammate at Butler. “He just was such a great locker room presence, helping me learn about the country, Butler and the conference and everything in general.”

Everything looked to be set after he was drafted in the top 10, but things didn’t turn out the way Steinberger had hoped. He only made three appearances for Houston Dynamo in the MLS.

“Obviously it was really frustrating to not get a lot of playing time,” Steinberger said. “I definitely had higher expectations and hopes to play in the MLS.”

In the middle of his rookie season he was loaned out to Indy Eleven, then still in the North American Soccer League. He made 12 appearances and even scored two goals in the process.

“When I got there, the team was struggling and I tried to help as much as I could to salvage the season because that’s what I was brought in to do,” Steinberger said.

The following season he was loaned out to the Jacksonville Armada, which ironically was the team he scored his first-ever professional goal against. The team was also struggling when he arrived on June 29, 2016. In 20 appearances, he was able to make an impact, scoring four goals as well as assisting four more.

While he had a good season at Jacksonville, Steinberger was released by the Houston Dynamo. He then signed permanently for Jacksonville in the 2017 season. In 32 games, he nicked eight goals from the midfield position.

On Jan. 31, 2018, Steinberger transferred yet again, this time to a very familiar place, the Indy Eleven.

“I just love it here,” he said. “It feels like a home. I love the community.”

Steinberger is active in the Indianapolis community, raising money for food banks and helping out local businesses. He is a “Good Food Crusader” at Green Bean Delivery in Indianapolis, an organization that strives to help families eat better and shop for groceries from local farms.

Earlier this season, he moved clubs again, though only temporarily. He currently plays for North Carolina FC on loan until the end of the season.

NCFC is Steinberger’s fourth team in as many years, but looking at the statistics, that wouldn’t make much sense. He succeeded at every team he’s gotten significant playing time, scoring two goals in 12 games for Indy Eleven and 12 in 52 games for the Jacksonville Armada. Steinberger was also named the NASL Player of the Week consecutive weeks while playing for the Armada.

His main goal at this point is to continue his career as long as possible. There is no plan B.

“Obviously, when you get drafted you have high expectations,” Steinberger said. “You want to be successful, win, move to a club in Europe. I always wanted to play for Manchester United and play for the U.S. in the World Cup. But at this point I just want to play as long as I can because one day I’ll have to hang up my boots and get a desk job.”