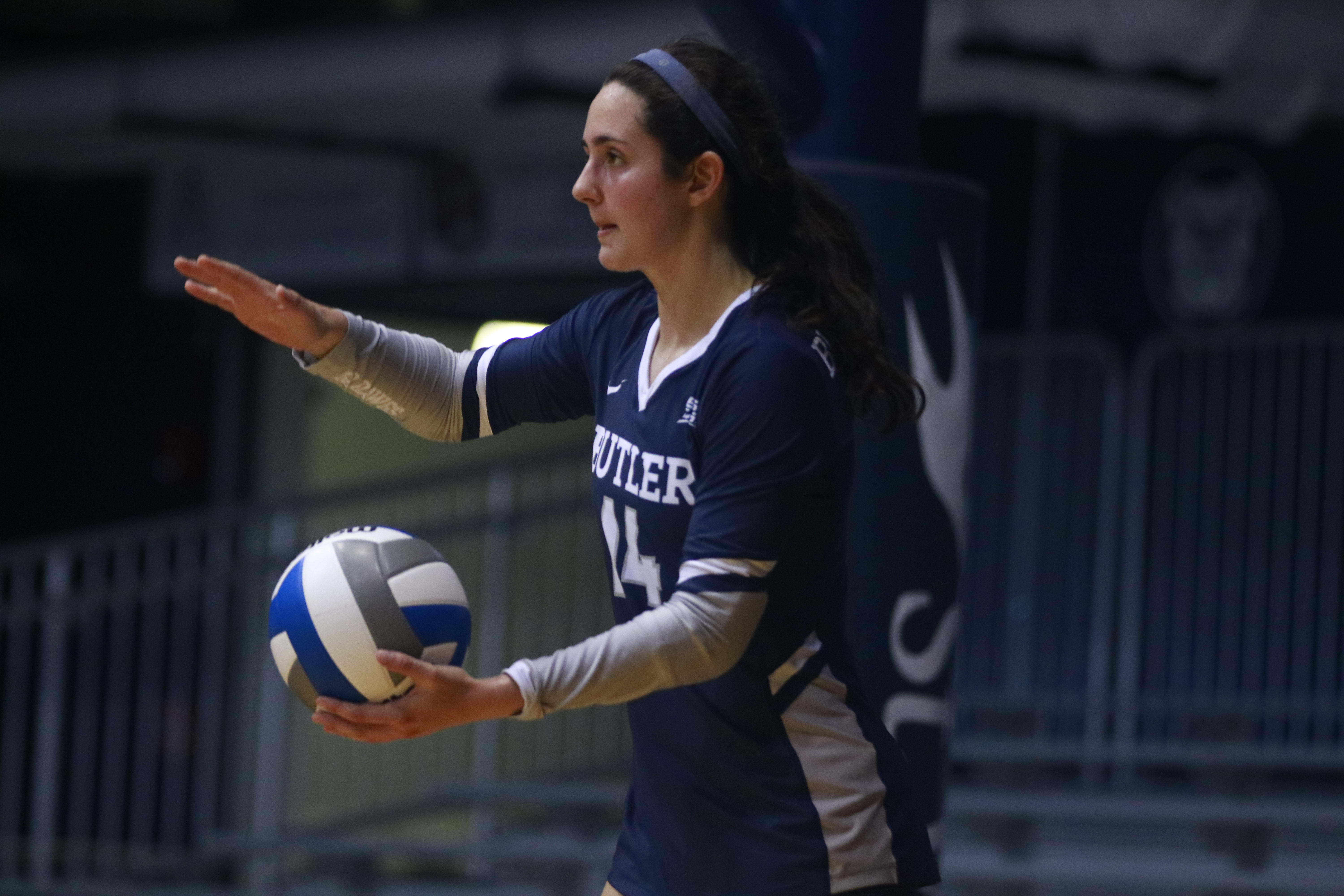 Elizabeth LaBue prepares to serve the ball during a game this season. LaBue’s 175 digs this season lead the Bulldogs. Jimmy Lafakis/Collegian file photo.

Life was just fine for 14-year-old Elizabeth LaBue. She was a setter for Sports Performance Volleyball Club and had developed a love for the sport. She chugged along, worked hard in practices and stayed steady throughout the process.

The time came for her to grow. Except her growth wouldn’t be physical. It would be mental.

During a tournament, LaBue’s club director made a switch. Although LaBue enjoyed setting the table, she now had to accept a different mission.

She became a defensive specialist.

“The coaches realized I wasn’t going to grow,” LaBue said. “They switched me right away. It was really hard going from something you knew so well and having to switch.”

Her trust in her club director paved her path to success. She worked as both a defensive specialist and libero and helped Sports Performance 18 Elite to a historic national championship two days before she moved on to Butler.

“I really came to appreciate what those positions have to do,” LaBue said. “You can’t set without a good pass. I would not be where I am right now if I did not switch.”

“She’s a pleasure to coach because she takes everything that you say and tries to put it into action immediately,” Sanchez said. “You can tell her something and boom — you see her trying to do it. That’s all you need as a coach.”

Her 175 digs lead the team. She is recording over 3 1/2 digs per set. That consistency is rooted in her deep trust of teammates and coaches.

But that trust was not always there. In fact, it required yet another leap of faith to help mold it.

She committed to Butler without meeting any of the players and without a volleyball scholarship.

In January, she drove three hours from her hometown, Wheaton, Illinois, to visit Butler. She had a conversation with Sanchez, but only spoke with head coach Sharon Clark for five minutes.

For LaBue, that fleeting time they shared was more than enough.

She received interest from schools on both coasts but decided she wanted to be close to home.

Defensive specialist Taylor Takeda asked Sanchez for LaBue’s phone number. She knew LaBue had not met any of the players.

When her text delivered, Takeda received a shock.

“She was like, ‘Oh, yeah. I committed,’” Takeda said. “She had committed two hours before I texted her. I said, ‘Well, I guess, welcome.’”

After going through 14 matches and starting the Big East gauntlet with LaBue, Takeda said she knows her teammate will always bring consistency to the team.

When LaBue establishes first contact with the ball, the team gets in its system. The former setter’s robust defensive play has assisted one of Butler’s current setters.

“I never even think twice about whether or not she’s going to get there,” junior Megan Ramseyer said. “It’s pretty much perfect every time.”

Whether it is on or off the court, LaBue is always willing to lend a helping hand. She is known for texting teammates and asking if they need anything.

But when she accidentally ate a chocolate-covered peanut over the summer, her teammates rushed to help her. LaBue, who is allergic to peanuts, had not experienced a reaction in eight years prior. She hustled to Hinkle Fieldhouse to receive medical assistance.

Several teammates were already there. When LaBue informed them of her situation, the Bulldogs scrambled.

“We jumped up and stopped everything,” Takeda said. “I started asking all these questions. ‘What do we do? Does she need her EpiPen? Is my car here? Do we need to take you to the hospital?’”

True to her nature, LaBue remained calm and steady.

“I knew I had to throw up,” LaBue said. “I just knew I would be sick for two hours, and I would be fine. That was it.”

Now, LaBue laughs with her teammates about the peanut incident. However, that moment gave her cause to pause.

When she reflects on the risks she’s taken, LaBue is comfortable with her decisions.

“Nothing is given to you, and no opportunities are guaranteed,” LaBue said. “Taking the leap has paid off. I would have never have pictured it happening this perfectly.”