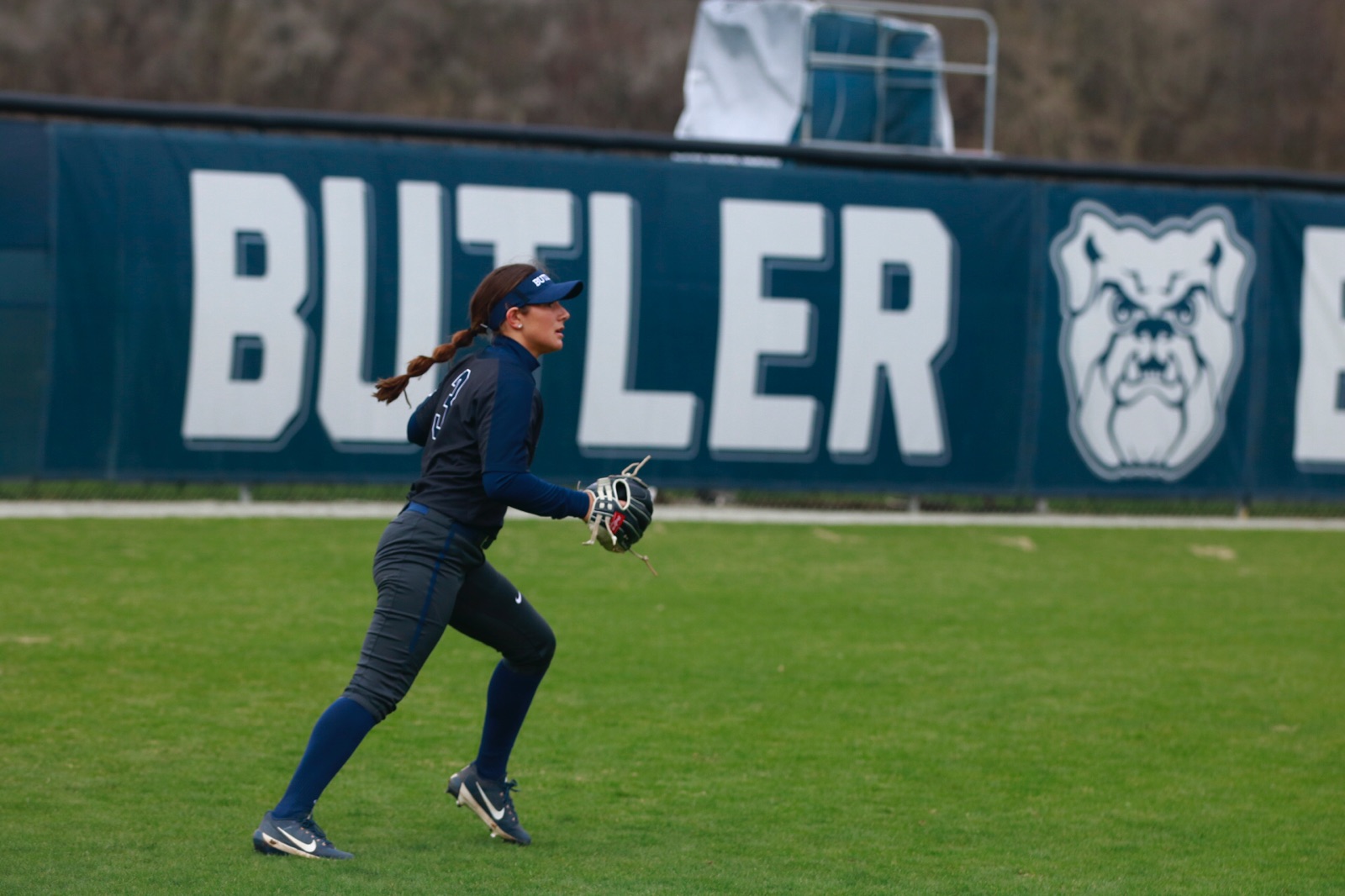 Sophomore Alyssa Garcia tracks a ball down in the outfield. The team is 7-5 in conference play after winning two out of three against Providence between April 21-22. Jimmy Lafakis/Collegian file photo

The Butler University softball team improved to 7-5 in conference play with a 2-1 weekend series against Providence College from April 21-22. The Bulldogs are 19-22 overall on the season.

In the first game of the weekend, Butler got on the board early with a two-run second inning. Senior outfielder Sarah Dixon hit a solo home run, her second of the season, and junior catcher Cheyenne Thompson drove in a run with a single.

Those would be the only two runs the Bulldogs scored, but it would be enough. After freshman Alyssa Graves loaded the bases to start the game, junior pitcher/infielder Kaitlin Doud came on in relief to throw seven shutout innings.

The final out as the Dawgs take Game 1 to win their fifth straight and move to 6-4 in BIG EAST play. pic.twitter.com/bxFc58lQMq

Doud allowed just two hits while striking out six and walking none as the Bulldogs held on for the 2-0 victory.

In the second game of the day, Butler jumped out to an early lead again thanks to a second-inning solo home run by freshman infielder Claire Gilliland, her third of the season. But the Friars responded with a four-run third inning off sophomore starter Gabbi Schnaiter to take the lead.

The Bulldogs cut Providence’s lead to two with a fourth-inning sacrifice fly by Gilliland, and the score remained 4-2 until the seventh inning.

In the bottom of the seventh, sophomore outfielder Alyssa Garcia and junior outfielder Jenna Foreman reached base before Doud hit a three-run home run over the right field wall to give Butler a 5-4 walkoff win.

A 3-run home run by Kaitlin Doud in the bottom of the seventh gives the Bulldogs a 5-4 walk-off win!

Schnaiter pitched 2 ⅓ frames in the game, surrendering all four Providence runs, before giving way to Graves, who pitched a scoreless 4 ⅔ innings while allowing just one hit and striking out seven.

In the final game of the series, Butler again struck first, scoring three runs in the bottom of the first inning. Dixon picked up an RBI with a sacrifice fly, sophomore infielder Madi Christiansen singled in a run, and sophomore outfielder Payton Longest drove in a run while reaching on a fielder’s choice.

The Bulldogs’ line-up for today’s series finale with Providence… pic.twitter.com/gQtpVxYgIq

The Friars matched the Bulldogs with three runs in the third inning, and the two teams kept each other off the scoreboards through the next four frames to force extra innings.

An RBI single and RBI double from Providence helped the Friars put up two runs in the top of the eighth inning. A groundout from senior infielder Alyssa Lach scored a run to bring Butler within a run in the bottom of the eighth, but the Bulldogs couldn’t strike again, falling 5-4.

Graves made the start for Butler, pitching 4 ⅓ innings while allowing three earned runs and striking out six. Doud came on in relief and took the loss, giving up two earned runs in the final 3 ⅔ innings.

The Bulldogs will return to action with a pair of nonconference home games. They’ll face Miami University (Ohio) on April 24 and Indiana University – Purdue University Indianapolis on April 25.