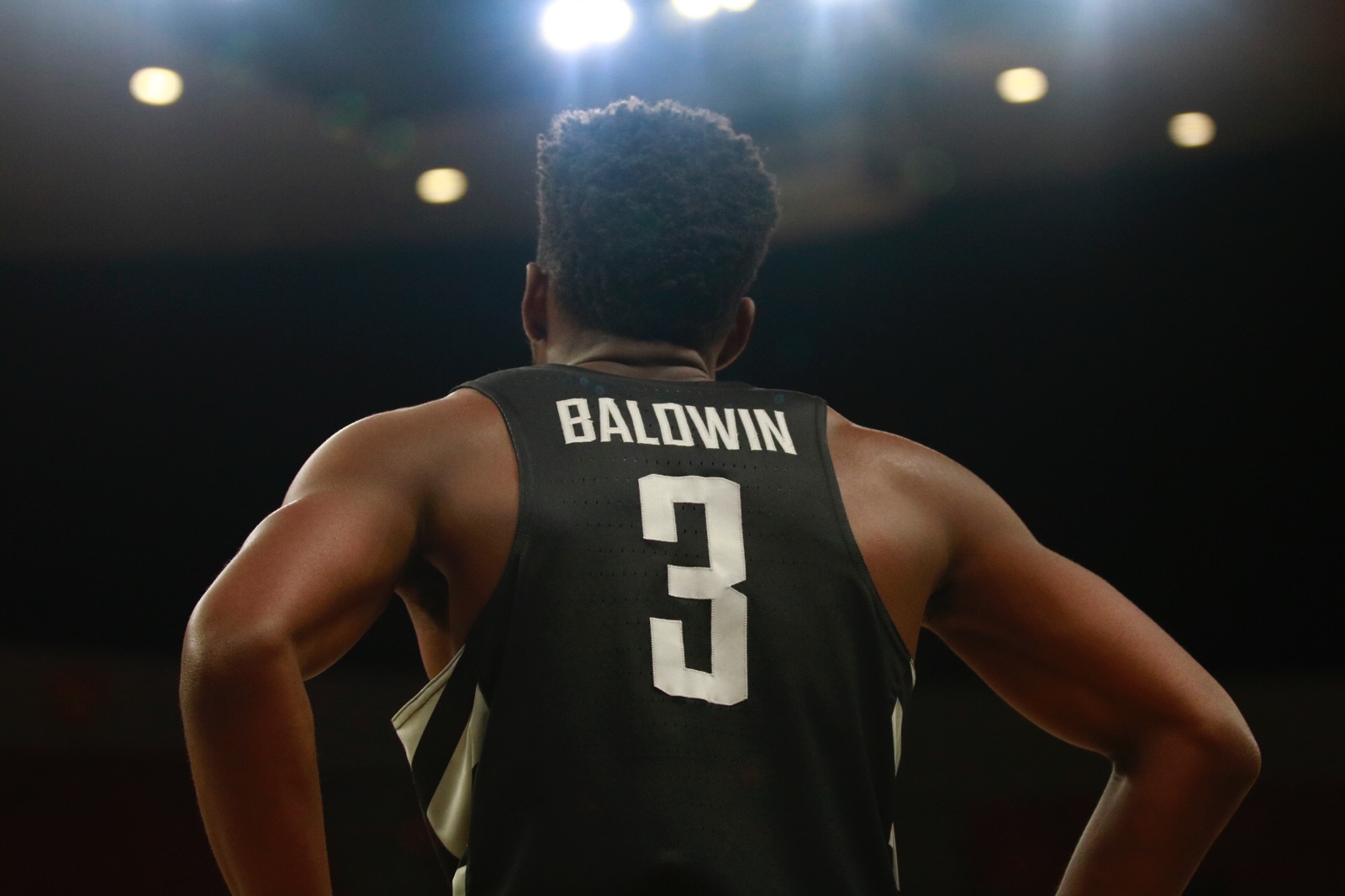 Kamar Baldwin sets his eyes on the court. Baldwin scored 12 points against Villanova on March 10 after totaling a career-high 32 points the night before. Jimmy Lafakis/Collegian file photo.

Halfway into their wreck of a game in the Big East semifinals against Villanova, Butler players walked into the Madison Square Garden locker room, looked in the mirror and recoiled. They didn’t like what they saw, nor did they have reason to in a game that turned into their worse loss of the season, 87-68.

Less than 24 hours after Kamar Baldwin was using the team’s season-long motto of “Gritty not pretty” to explain a 14-point comeback against Seton Hall the night before, the same motto could be used to describe the Butler-Villanova game — it wasn’t pretty.

Villanova’s Mikal Bridges hit an effortless 3-pointer five seconds after the tip — and maybe that tells you everything you need to know about the rest of the game.

Aaron Thompson turned the ball over. Then so did Tyler Wideman. Kelan Martin missed his layup before Kamar Baldwin fouled and missed a jumper. Sean McDermott and Wideman fouled. Paul Jorgensen’s shot bounced off. McDermott couldn’t hit the three. Nate Fowler picked up a foul too, but not before turning the ball over. Aaron Thompson’s 3-point attempt was no good, and then finally, finally, the freshman scored Butler’s first points of the night.

Good grief. It only took five minutes and 28 seconds.

And what was Villanova doing in those five minutes and 28 seconds? Exactly what Butler wasn’t. Scoring 19 points. But they weren’t just scoring, they were making it impossible for Butler to score anything at all.

It was so ugly for Butler that Martin missed not one, but two consecutive free throws in the second half. And that’s only a side note next to when Martin scored his first two points. When? Martin, the Big East scoring champion, scored his first points of the night with 4:27 minutes left in the first half.

“They denied me, every player they had just denied me the ball,” Martin said. “I was just trying to get open every time. I mean hats off to them, they had a great game plan for me. And sometimes you can’t beat it. Things like that happen.”

Wright was so happy with his team, the man practically bounded up the stairs into the press room and was ready to start answering questions before players Mikal Bridges and Phil Booth even made it to the room.

“That was one of our best defensive performances,” Wright said. “We played well. They’re a really good offensive team.”

Villanova would know. Until tonight, Butler seemed to be the Wildcats’ version of kryptonite, winning three out of the last four matches when every other team in the country is 5-59 against them. But the last time Butler beat Villanova in December, they set a program record by hitting 10 straight 3-pointers.

None of that was on track to happen this time around, and the third time Martin attempted to clinch a 3-point shot, the ball fell woefully short, just brushing the underside of the net.

Strangely, the Bulldogs actually outshot the Wildcats 48 percent to 47.5 percent, and were shooting 50 percent compared to Nova’s 42.4 percent in the second half.

The numbers themselves aren’t horrendously ugly, the ugliest blemish is how Butler managed to dig themselves into a 19-point hole.

Where was the team that basically willed themselves to win against Seton Hall? According to head coach LaVall Jordan, they’re still there, and the same guys that have made it a habit to rally after bad starts are the same guys that showed up on the court tonight.

“Told them in the locker room, I love this group, what we’ve become,” Jordan said. “I think it’s  a group of fighters.”

The difference, he said, was not in Butler’s efforts, but in how Villanova managed to shut them down. It’s one of the reasons why they are No. 2 in the country. “Heck of a basketball team,” Jordan called them.

Everything about this season seems to indicate that the “Gritty not pretty” attitude works well for Butler. Baldwin used the motto last night against Seton Hall, and it’s an easy explanation for the 15-point comeback versus Ohio State and then the ability to erase 20-points from Georgetown earlier this year.

But against Villanova? No, watching a team try to come back from an ugly start just made the rest of the game even uglier.