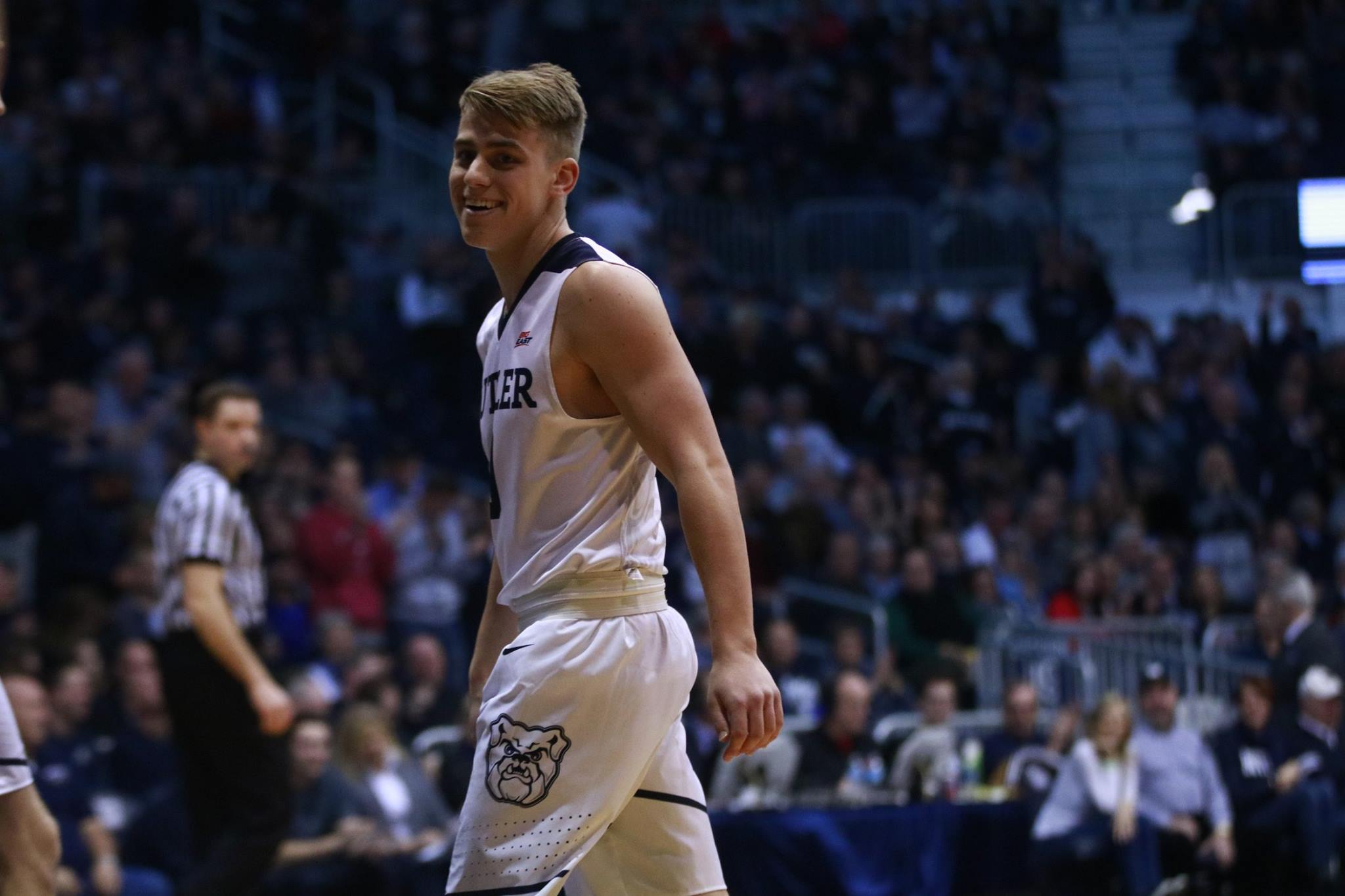 Give a smile an inch, just a tooth or two, and pretty soon it continues to spread until this happened — Campbell Donovan couldn’t stop smiling.

What started as a Henry Baddley layup fumbled into an awkward half bounced, half heaved mess that stopped in Donovan’s waiting hands.

Sean McDermott must’ve seen the open corner shot first, because by the time Donovan’s wrist finished on the follow-through, McDermott was already out of his seat. His right hand was raised. His fingers formed the number three.

In section 119, Rick Donovan saw the shot, too, shifting in his seat to tell his wife Sabrina, “That looks like it’s on line.”

A look at the second half highlights… #GoDawgs pic.twitter.com/IGzBUFUuhv

Donovan always said his dad knows his shot better than he does. Once a Butler basketball player himself, Rick Donovan was the one rebounding for his son during early morning workouts at Spiece Fieldhouse and late night shootarounds in the driveway.

Just how many times? Enough to know when the freshman guard was seconds away from scoring his first career three in a Butler uniform.

It was muscle memory mostly — catch and shoot — because thank God, his body didn’t have time to tell his brain this was actually happening. Otherwise his hands might’ve started shaking the way they did during Donovan’s first varsity game at Bishop Dwenger.

But when his brain finally caught on, so did his smile, and oh my God did that actually go in?

The crowd’s reaction made it real though, as if all 9,000 fans inside Hinkle could poke Donovan’s arm with a foam finger and say — see? We were waiting for this to happen.

“I had to smile,” Donovan said. “I couldn’t help it. I couldn’t try to be all serious because it was a big moment.”

Everything you need to know about that moment was evident in that smile, because there it was again, after Butler’s 80-57 win. Donovan looked at his dad.

Donovan has his dad’s smile and his mom’s humor, but when Rick Donovan saw his son smiling after the game, it looked a lot like, “I made one, Dad. And I’m going after the next one. Just you wait.”

Rick Donovan always knew his youngest of three was a self-aware kid. It would only be a matter of time before his son would find the line between the confidence it takes to play for Butler basketball, and the humility it would take to do it as a walk-on.

“I’m not quite at these guys’ level,” Donovan said. “But with confidence I can fit in. I don’t have to be the fastest or the most athletic. I just have to play smart and be confident in myself. That’s how I fit in. That’s how I make an impact. When I’m confident I play better, I play smarter and I play with passion. That’s what helps this team.”

It’s a different grade of confidence from Kelan Martin’s, a senior whose composure seems to feed off his natural scoring ability, and a different brand from the fearlessness of Paul Jorgensen, who will shoot the ball from 35 feet out against the No. 1 team in the country just because he can.

But the confidence is Donovan’s own.

“I try to take it all in because it’s all about the experience I’m having, but I also have a job to do,” Donovan said. “I don’t want to look like a chicken with no head. I want to look like I belong. I know I do belong.”

Donovan said it with such ease, it’s hard to imagine he’s the same player whose high school coach yelled at the guard for passing when there was an open shot.

Donovan knew every curve of 3-point arc in the Saints’ home gym, and everyone on the team knew it, because Donovan was the guy putting up 200 to 500 more shots after practice. Five spots. Ten shots at each. Repeat four times.

“I’ve had confidence problems all my life,” Donovan said. “People believe in my game so much more than I do, which is humbling.”

Believe in his game? Why do you think so many fans stay in their seats even as the game clock casts the final seconds off? Donovan has played eight games in Hinkle for a total of 18 minutes. Not a single minute was played in front of an empty fieldhouse.

How any of this could be reality is beyond Rick Donovan. Dreamily he drove back to Fort Wayne after the DePaul game, then couldn’t help but watch the clip of his son’s shot again and again and again.

McDermott was the first to stand, but then it was the entire team — Tyler Wideman and Paul Jorgensen and Nate Fowler, who had his hands stretched so high, it near looked like he could block a shot.

“I probably should,” Donovan laughed. “It’s not worth it. They’re probably still pretty loose up there.”

Donovan’s two front teeth were victims of his first high school varsity start two years ago after tripping in the lane on a fast break and landing mouth first.

The layup was good, but senior guard Sam Royal took one look at his teammate’s teeth and all he could think was, “Well, this isn’t good.”

Formal was four days away, oh man, some poor girl was going to have a toothless date if Donovan didn’t see a dentist soon. The dentist would eventually fix the U-shaped gap — just not before Donovan got his free throws in.

Coach Kostoff didn’t even have to call a timeout, Royal recalled.

When Donovan scored against DePaul in early February, Royal was standing in Dawg Pound and waving a cardboard cutout of his former teammate’s head. Even in the crowd, Donovan was smiling.

The way the crowd reacted, a casual observer might’ve assumed Donovan broke a school record or moved up a spot on the school’s all-time scoring list. But Kelan Martin is currently third on the all-time list with 1,961 career points, which puts Donovan 1,958 points away.

It’s still 1,958 points closer than where Donovan thought he’d be at this point last year when he considered playing Division III basketball for DePauw. That didn’t turn out too shabby for Brad Stevens.

But Stevens’ dad didn’t play for Butler. And sure, maybe Stevens coached the school to consecutive Final Fours, but Donovan was a 10-year-old kid watching his older sister on Butler’s cheerleading team and thinking that there was nothing he wanted more than to be on that court.

Funny how things work out — how an alumni game Rick Donovan played in fall 2016 led to a phone call with former Butler assistant coach Terry Johnson, which turned into a meeting with Holtmann at the end of last season.

Then Donovan was sitting with mom, dad and Holtmann, and maybe he wasn’t hearing this right, because it sounded like the coach was offering a walk-on spot.

“I probably could’ve nudged my son a little bit, and he probably would’ve fallen over,” Rick Donovan said.

Donovan didn’t know what to expect when he entered his first game, but the fan reaction was March Madness-worthy loud, and it was only November. Fifty-eight seconds left with a 17-point lead over Furman, and no one was leaving Hinkle.

It’s a “Holy crap, I can’t believe I’m here” realization that keeps the freshman guard praying before every game.

Head coach LaVall Jordan leads the team in a 30-second prayer in the film room, and when he finishes, Donovan says a silent one of his own.

“Thank you.” Whether he ends up playing or not, it’s always “thank you.

“Every time I put the jersey on, I just think to myself, ‘Wow, this is incredible,’” Donovan said. “This name on my chest is so much bigger than anything I’ll ever become.”

Donovan has no idea how he ended up wearing the number zero and Jordan doesn’t know either, but it almost works out better this way. Somehow the number became so perfectly suited for Donovan that all Jordan could say about it was: “He just wants a jersey, not a number.”

“Agent Zero,” Jordan joked, and he was still musing out loud about Donovan’s number. “We’ll have to come up with a good story.”

In Donovan, you have a player who can get guys laughing after a bad game, even if he has to get them to laugh at him. You also have a competitor, one of the first guys off the bench trading hi-fives, and the guy telling Kelan Martin during senior night, “It’s Key time, it’s Key time!”

You have the owner of the team’s favorite Spotify playlist because it’s filled with The Weekend and Drake, supposedly “the greatest of all time.”

In Donovan, you have a player who takes his role as a scout player so seriously, he’ll airball a three in practice on purpose, just to make a point it might happen in a game, and the team has to be prepared for anything.

But he also gave the school Donovan, an Indiana kid who just wanted a Butler jersey and didn’t care what number it was.

He has that jersey now, and Campbell Donovan can’t stop smiling.