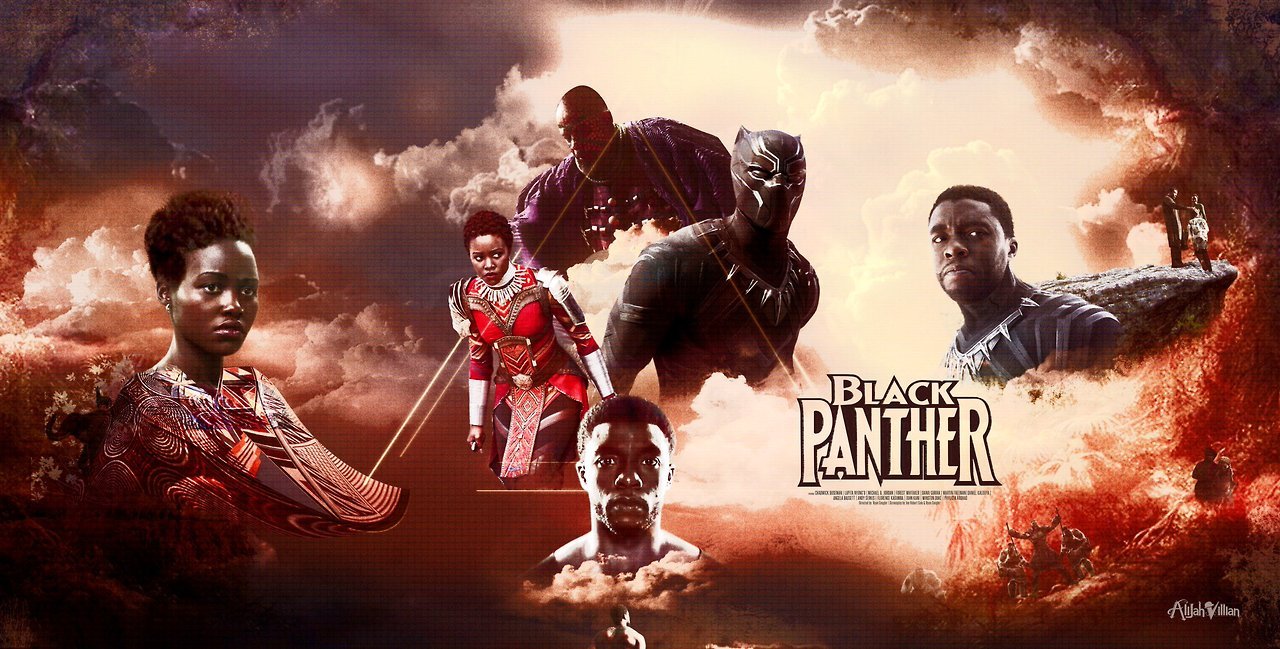 Black Panther is a new Marvel movie that was highly anticipated and has broken box office records. Photo courtesy of Flickr.

Marvel Studios’ newest film, “Black Panther,” is breaking records and barriers while creating new conversations for what it takes to make a cinematic impact on consumers. Released last Friday, “Black Panther” has been a highly-anticipated film for many consumers including Marvel fans, young people and the black community.

“Black Panther” became the top-grossing film in history by a black director (Ryan Coogler) and features a largely black cast. The previous record-holder was “Straight Outta Compton,” which collected $214 million worldwide in 2015.

Black Panther has grossed more than $361 million worldwide, making it the highest-grossing film of 2018 thus far.

Taking place in the fictional African country of Wakanda, T’Challa, both the newly appointed king and protector Black Panther, fights to uphold the traditions and legacy of his country. He also faces challenges from enemies who hope to exploit his country’s resources and wealth for complex motives. In this way, the film raises awareness for black people living in poverty, and presents positive representations of African nations.

Despite concerns of selling toys Robert A. Iger, Disney’s chief executive, approved a $200 million production budget. That’s at least 30 percent more than budgets for other Marvel non-sequels like “Doctor Strange” and “Ant-Man” according to Brooke Barnes from the New York Times.

Before the movie was released, Top Dawg Entertainment and Kendrick Lamar produced the film’s curated soundtrack released on February 9, 2018 featuring popular artists like SZA and the Weeknd. This was a marketing tactic by Marvel to raise excitement for the upcoming film.

The soundtrack features predominantly black artists and music with lyrics confronting topics and paying tribute to the black community through rap and R&B.

As people may have seen on social media, people are proudly going to see this movie in traditional African garments, are going in groups, and are showcasing their appreciation to Marvel for creating a work that is more than just a money maker.

Not only did I think the movie was phenomenal, I was proud to merely be witnessing a moment in history.

Many Butler students have had the opportunity to see the new film. Despite the movie having a predominantly black cast, it appeals to many audiences due to the messages and symbolic images portrayed in the film.

Monica Livorsi is a senior arts administration music major. An avid Marvel fan, the movie had a huge impact on her.

“It was incredibly well-done, infused with so many underlying messages that I’m still discovering and processing.” Livorsi said. “My immediate thought after seeing it was ‘can they make a movie about the general [in the film]?’ Because she encompasses my idea of a female superhero because of her integrity, intelligence, power, beauty and fierceness.”

The women in the film were highly showcased and received a lot of screen time — more so than the male-dominated Marvel movies produced in the past. These women included Academy Award winner Lupita Nyong’o, Golden Globe winner Angela Bassett, Danai Gurira, and Letitia Wright.

Instead of being in the background, these women performed alongside in the foreground with actors Chadwick Boseman and Michael B. Jordan. Playing the roles of Black Panther and Erik Killmonger, Boseman and Jordan were foils to each other and products of the environments that they lived.

“I think one of the most powerful parts of the movie is the alternative idea the ‘villain’ poses,” Livorsi said. “In action movies, there’s usually a ‘good side’ and ‘bad side,’ and while that still existed in Black Panther, there were times when it was difficult to choose who to root for and I think that very strongly relates to the present. There are not definitive, black and white answers to a lot of the issues were facing today and only seeing the world in such an extreme way creates divisions.”

Another theme that arises throughout the movie is what to do with the abundance of resources coming from one place. Should the wealth and prosperity be shared and globalized, or sanctioned and reserved?

“As I watched the movie I kept going back and forth on what I agreed with and I’m still trying to think of a solution,” she said.

Abraham Diop is a junior international business and marketing double major and resident assistant in ResCo. He helped arrange for several units to get free tickets to go see the movie Saturday night.

Diop has been waiting for the release of the film since its announcement in April 2017. Black Panther is his favorite childhood superhero. The movie held a lot of sentiment for him since is  from the Ivory Coast and Senegal.

“This was the most beautiful movie I have ever seen in my life because of the cinematography, the action scenes, and the depth of the characters and storyline,” Diop said. “Everyone needs to see it because of how it portrays Africa. Often known for mysticism and being savage-like, this movie contradicts misconceptions and draws inspiration and knowledge from real people, cultures, and past and present civilizations.”

It is no coincidence that a movie featuring a predominantly black cast was released during Black History Month. The movie reached audiences strongly from the African-American community. A portrayal of African countries not being inferior to other nations, but instead celebrating their culture, heritage, and contribution to the past and present.

“This film dives into the issues of African-Americans feeling belonged or neglected by either America and/or Africa,” Diop said. “Huge overarching themes were present including what the role of a major super power is when confronting globalization vs. isolationism.”

Lucas Graden is a digital media production and psychology double major. He saw the movie Thursday, opening night. A huge marvel fan, Graden said that “it was good to see Marvel use the power they have to make a change.”

At a recent costume event, Graden had the idea to dress up as a character from “Black Panther.” However, the challenge was that there was only two white male characters in the entire film.

“That has never happened to me before, where I couldn’t dress up from a movie that I wanted to portray,” Graden said. “It really made me realize the privilege I have as a white male because of the fact that nobody in the movie looked like me, and there are plenty of people that have shared that experience for the bulk of their lives.”

Actively engaged in his fraternity and the Butler community, Graden recognizes the room for growth on campus.

“Butler lacks representation for people of color and this movie allows people to see something outside of their own understanding and witness the cultural shift in popular media.”

As Hollywood is in the development of diversifying the movies in production, predominantly white institutions must continue to diversify the initiatives taken to support and represent minority students.

However, I say that to say this. Do not let comfortability create complacency. This is a landmark in history, not the finish line. There is still work to be done regardless of party affiliation or personal background.

Monica Livorsi, a senior at Butler, holds this sentiment and hopes that other Butler Bulldogs understand the importance of seeing this new movie.

“This movie celebrates a beautiful culture and people that unfortunately have not been portrayed often in film as strong and empowered,” Livorsi said. “The main part of the movie that impacted me was the number of strong, African female characters depicted as heroines. Unfortunately they are a rarity in films, but this film had a multitude and they were all strong, powerful, admirable, and beautiful characters. As someone who finds cultural education and the celebration of diversity extremely important, I would encourage everyone to see this movie.”

Scott Bridge is a journalism professor at Butler. Although he has not seen the movie yet, he reads the “Black Panther” comic book and owns a figurine that sits on his shelf.

“What I love about Marvel characters, at the core in spite of all their powers, they face problems just like the rest of us,” Bridge said.

A major component to the film was the fact that the antagonist acted out against Black Panther and Wakanda due to experiences he had growing up in poverty in America.

Bridge said that with all the hype, success, and recognition the movie is receiving “it shows that producing movies with predominantly black cast can make money.”

“He didn’t have super powers, and that’s what I love about him, and I loved him as a hero beyond the fact that he was black,” he said.

Bridge now waits in anticipation to find time to see the film, but believes that the movie will rise to the standards and expectations set.

“I’m guessing that I will have a certain feeling that compares to when I saw ‘Wonder Woman.’ You don’t see many movies that showcase new people and ideas everyday.” Bridge said. “Depicting a woman in lead role like Wonder Woman holds historical prominence. I imagine that I will view this movie the same way if not more so.”

Black Panther was one of the first heroes that I was introduced to as a child growing up. As a young black man I work hard to break stereotypes, achieve my goals, and stand for my people. I want and hope for the continuing diversification of our society, and more specifically at Butler University. Black Panther is a step in the right direction

As a Bulldog I want the best for all my classmates, colleagues, and friends. Please go see this movie with an open mind. I plan on going to see this movie a thousand times over.

I hope that after reading this review and seeing the film we may share comparable or contrasting views to create conversation furthering our understanding of each other. Thank you for reading, Go Dawgs! and Wakanda Forever!