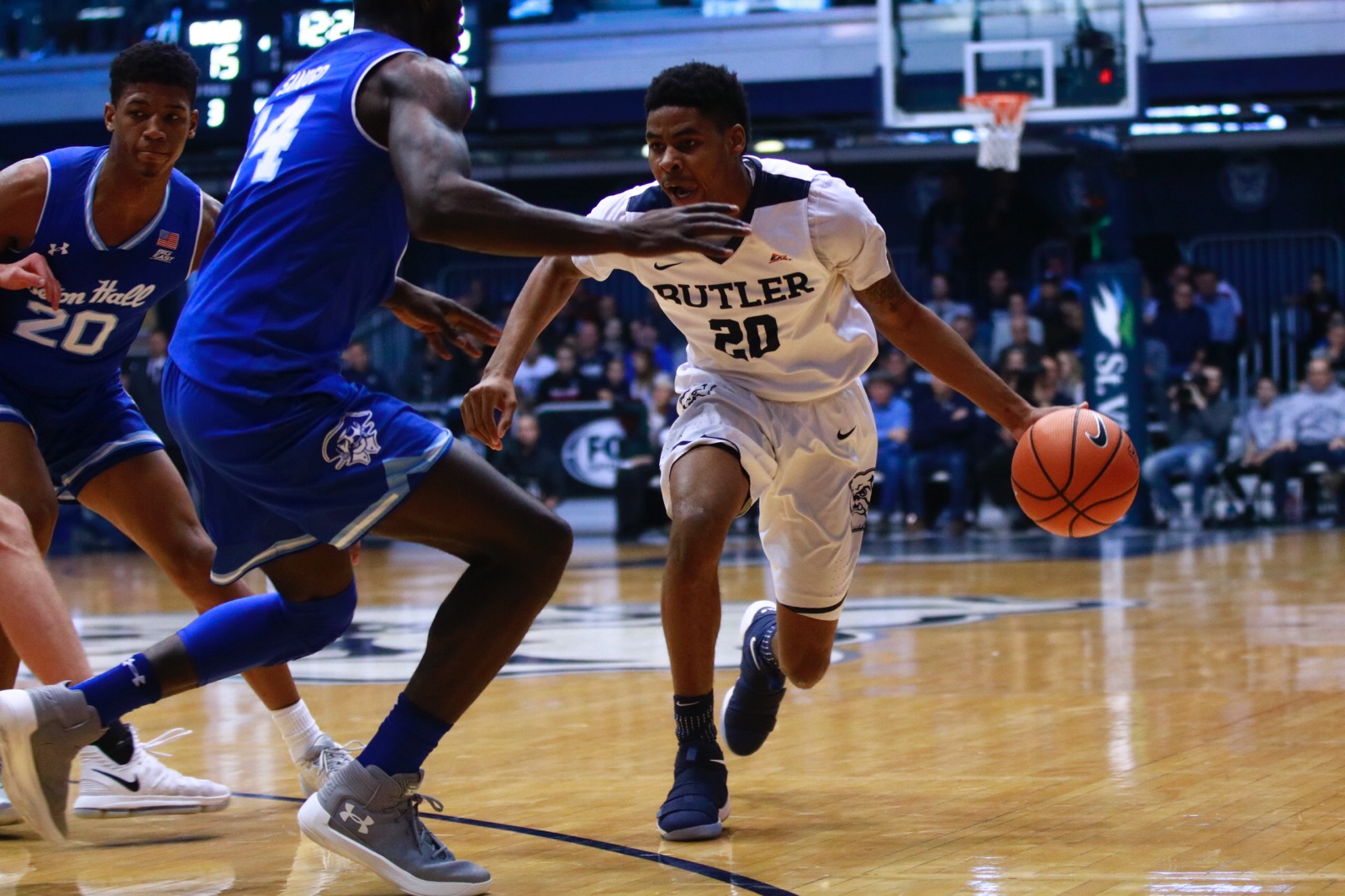 Henry Baddley drives against the Seton Hall defense. Baddley was a perfect 3-for-3 from the field and finished with 14 points. Photo courtesy of Jimmy Lafakis.

The Butler men’s basketball team let a late lead slip away against Seton Hall, resulting in their first home loss of the season. While disappointing, this loss isn’t a huge deal in the grander scheme of things. The Bulldogs have played three teams that will be in the top 20 come next week’s rankings in their first four Big East games and are 2-2 in conference. It could’ve been much worse. Here are three takeaways from LaVall Jordan’s first defeat inside Hinkle Fieldhouse as Butler’s coach.

1. Butler’s role players kept them in this game.

Considering that Kelan Martin picked up two fouls in the first four minutes and Kamar Baldwin didn’t score until the 4:25 mark of the first half, this game could’ve very easily gotten away from the Bulldogs. The bench, led by Henry Baddley, made sure that didn’t happen. At halftime, Butler had already gotten 19 points from the bench and finished the game with a 32-14 advantage in bench points.

It’s wonderful that Martin and Baldwin started Big East play on an absolute tear, but they’re going to need help. If Butler only wins games where they combine for 50 or so points, it’s going to be tough to consistently win in this conference. Getting steady contributions from the likes of Nate Fowler, Sean McDermott and Baddley takes some of the pressure off of Butler’s main offensive options. If the bench can replicate what they did in this game, the Bulldogs will be able to be competitive even if Martin and/or Baldwin aren’t at their best.

2. The Bulldogs got to the free throw line and converted, but fouled too much.

Butler struggled shooting the ball in the first half, going 12-for-33 from the field. However, they still scored 40 points, thanks to a 12-for-12 performance from the free throw line. The 28 free throws Butler had in this game were the most all year, a positive sign. On the flip side, the Pirates got to the line 32 times thanks to the 24 fouls committed by the Bulldogs. They did not do a good enough job of defending without fouling.

In the Bulldogs’ four losses this season heading into the Seton Hall game, they’ve averaged less than nine free throw attempts per game. Additionally, Butler’s opponents have gotten to the charity stripe 37 more times than the Bulldogs coming into this game. There is a clear correlation between how Butler plays on offense and how many free throws they shoot. The Bulldogs did a great job in this game attacking the basket and putting pressure on Seton Hall’s defense. That needs to become a theme as the season continues.

3. Butler rebounded well early on but struggled defending the interior.

The Bulldogs won the rebounding battle 21-13 in the first half, which is no small accomplishment against Angel Delgado, one of the best rebounders in the country. They also had 18 second chance points while only giving up 12 to the Pirates. The second half was a different story, as the Pirates had a 17-11 edge on the boards after halftime. Butler also failed to secure a defensive rebound down two with 19 seconds left. The longer the game wore on, the harder it was for the Bulldogs to control the glass.

Delgado had his way on the offensive end of the floor the entire game. He had 18 points at halftime and finished with 28 points, 15 rebounds, and six assists. Seton Hall’s offense ran through Delgado and his dominance inside helped the Pirates get open looks from three, which they converted at a 50 percent clip. Butler’s lack of size makes it difficult for them to be a great defensive team inside, but guarding the post is becoming a major issue and the Big East isn’t filled with small teams.