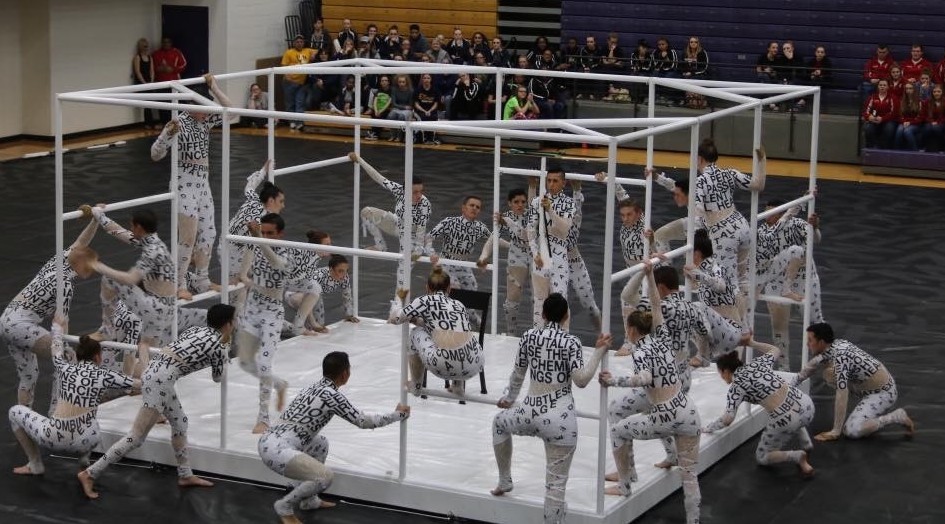 Alayna Bolen is a senior interactive media major; but, when she isn’t studying, she competes in one of these independent Indianapolis-based color guard groups.

Bolen used to participate in the Butler Marching Band color guard, but when the Legacy Performing Arts group started in Indianapolis, she decided to make the switch.

“Last year, there was a brand new group that came out in Indianapolis and that’s where I am at again this year and I really like it,” Bolen said.

Legacy is a non-profit group color guard and drumline group. Legacy’s color guard consists of 20 performers and a handful of staff members and directors. The numbers can vary due to performers quitting or being injured and staff members working with other groups on any given day.

The Winter Guard International Indianapolis Regional, more commonly known as WGI Regional, is a color guard competition that features over 70 different groups from across the Midwest. Some guards are associated with high schools and some are independent groups. The competition took place Feb. 18 at Hamilton Southeastern High School and Warren Central High School.

Last weekend’s regional is one of many that go on during the color guard season. At these performances, teams receive scores from the event judges, which are then averaged and go towards each group’s ranking compared to the rest of the WGI groups.

Then in April, WGI hosts their finals week competitions in Dayton, Ohio. Groups from all over the country come to compete in the finals. There are even a few international teams that come. In the past, guards from the Netherlands, the UK and Japan have made the trip to Ohio to perform.

The Legacy Performing Arts group travels as well, but not nearly internationally. They have been to other competitions in Ohio and another in Bowling Green, Kentucky.

While she thinks the road trips are fun, Bolen was excited to be competing in the Indianapolis this past weekend.

“I am really excited,” Bolen said, “We just got reclassified to open class this year, we started out be A-class. So it is our first big regional as a higher class.”

In addition to the excitement of competition, the Indy regional means that Bolen will reunite with some old friends.

“There are also some people that were with legacy last year that are now with other groups, so I am excited to be with them because I miss them,” Bolen said.