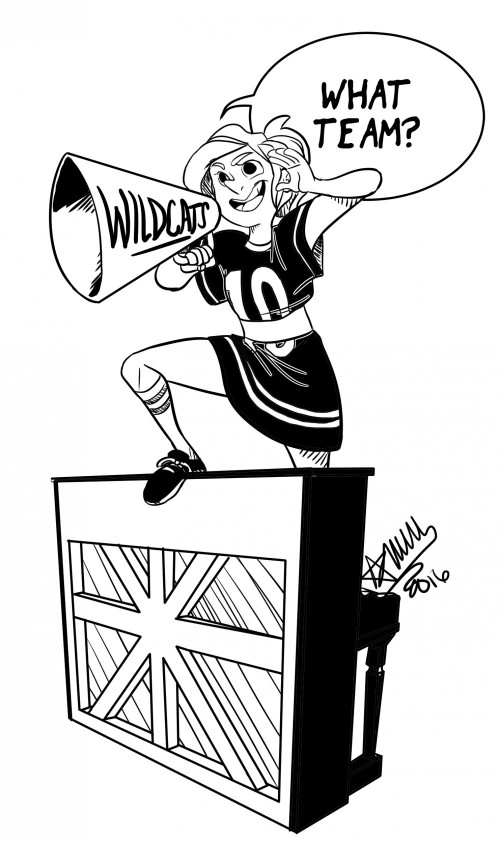 Last week, the cast of High School Musical reunited for the 10th anniversary of the film.  It got me thinking:  why, 10 years later, is a cheesy musical such a cultural phenomenon? Why do we love High School Musical?  I have compiled a few reasons.

An angsty, young Zac Efron was the only thing girls everywhere never knew they needed. The Disney Channel has a knack for casting performers who grow up to be major heartthrobs—look at Zendaya, David Henrie, Demi Lovato, Jake T. Austin, and Selena Gomez if you need more convincing

Sharpay and Ryan Evans are the unofficial spirit animals for high school students. I was in fourth grade and saw the movie for the first time. I was convinced my wardrobe would magically transform into bedazzled cargo pants, gold berets, and glittery pullovers by the time I was fourteen. You can imagine my disappointment when I was stuck with the same old jeans and t-shirts I had owned since middle school.

Nonetheless, Sharpay and Ryan’s fashion choices were so iconic that Disney never quite found a way to top them.

I am a victim too. Yesterday, one of my friends, frustrated that she didn’t get the correct order at McDonalds exclaimed, “This is not what I want!”

Without missing a beat, I shot back with, “This is not what I planned, and I just gotta say I do not understand.”

Once these songs have been memorized, it is almost impossible to get them out of your head. From Gabriella’s dramatic love ballads, to Ryan and Sharpay’s upbeat audition songs, I can guarantee I know the lyrics.

Who hasn’t had a fantasy of finding the love of their life at a ski lodge over winter break?  Casual karaoke?  Entire school breaking out in spontaneous song and dance?  These are just some of my personal dreams.

From sneaking off to a secret rooftop garden instead of going to class, to shooting that last minute buzzer beater to win the championship, nothing is too far-fetched within the halls of East High.

There are a few phrases that will never be the same since High School Musical’s 2006 release.

I can barely hear anyone discuss the status quo in a lesson without visualizing Zeke holding a crème brulee and explaining to his teammates why he loves to bake.

If you yell “What team?” someone, somewhere will respond with “Wildcats!”  The catchphrase of the East High basketball team is a phenomenon all of its own. Come to think of it, anyone who went to school where their mascot was a wildcat probably never heard the end of it.

Did I mention Zac Efron?

One thing I loved about growing up was all of the positive, girl-power media produced— mostly by Disney Channel.

I loved watching Raven deal with race, body image and family on That’s So Raven. I shared Lizzie’s awkward struggle to survive middle school. They were girls like me. And I related to them.

High School Musical takes me back to a simpler time, when Ashley Tisdale and Zac Efron basically ruled the screens of televisions around the world.

9. It taught us the importance of working together

Where else could the mathletes and the basketball team come together to ensure that their friends could audition for a musical?  So what if it involved illegally hacking into the school’s electrical board and cutting off power to the gym?  Who cared if they simultaneously disrupted a championship game and a scholastic decathlon?

All that mattered was the fact that Troy and Gabriella got to sing “Breaking Free” in front of the entire student body.

The number one reason why I love High School Musical is because we really are all in this together. It’s cheesy, but it’s true.

No matter where I go, I know I will always have people that share my interests and want the same things. No one is ever alone, and if anyone feels like they are, help is as easy as turning to the lyrics of this song.