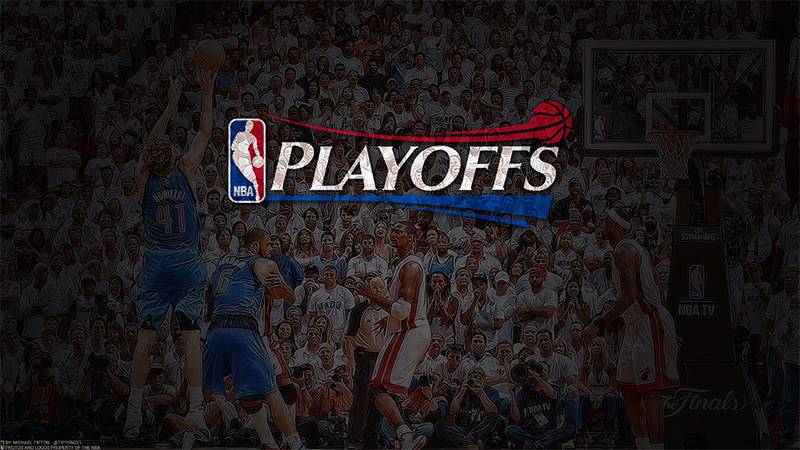 The NBA regular season came to an end last night and all the playoff matchups have been set. 16 teams will begin their journey for the Larry O’ Brien trophy starting tomorrow, April 18.

The hometown Indiana Pacers dropped out of the eighth and final playoff spot in the Eastern Conference, but there’s still plenty of action to take in.

The Brooklyn Nets went into the final day of the regular season unsure if they’d even qualify for the playoffs. They ended the night by stealing the No. 8 seed from the Pacers, which earned them a tough matchup against the Atlanta Hawks.

The Hawks have made the postseason eight consecutive years and have never advanced past the second round, but this year could be different. Four Hawks were named All-Stars — Jon Horford, Kyle Korver, Paul Millsap and Jeff Teague.

The Nets looked to be short-term contenders last year with their own version of the “big three” when they acquired veterans Kevin Garnett and Paul Pierce from Boston to supplement star point guard last season. But Pierce and Garnett left town and Williams was left with up and coming players Brook Lopez and Joe Johnson.

They will have the tall task of taking on the Hawks who finished with a franchise record 60 wins this year.

No. 2 Cleveland Cavaliers vs. No 7 Boston Celtics

The No. 2 seed Cleveland Cavaliers should have little trouble advancing through their half of the Eastern Conference playoff bracket starting with a matchup against the No. 7 seed Boston Celtics. If the first-round series between the Cavaliers and Celtics turns into anything other than a postseason tune-up for Cleveland, it could be regarded as the biggest playoff upset in years. It probably won’t happen, but one could wish.

But Butler Bulldogs fans know best that no one should ever count out a Brad Stevens-led team. While he knows his way around postseason basketball, his 15-man roster features nine players 25-years-old or younger, and no true star. This will likely be a yawner of a series, but this is Stevens’ first step on the NBA coaching ladder.

No. 3 Chicago Bulls vs. No. 6 Milwaukee Bucks

The matchup inter-divisional series between No. 3 seed Chicago Bulls and No. 6 seed Milwaukee Bucks should be a defensive slugfest. Milwaukee is eighth in the league for fewest points given up at 97.4 while Chicago ranks tenth with 97.8.

Derrick Rose has missed so many games over the past few seasons that the Bulls have grown accustomed to winning without him. He’s been held to 50 games this season after having another setback with his knee, so don’t be surprised if he receives limited minutes in the postseason.

No 4 Toronto Raptors vs. No. 5 Washington Wizards

The No. 5 seed Washington Wizards have perhaps the best chances at pulling off an upset in the first round of any Eastern Conference team, matching up against the No. 4 seed Toronto Raptors.

This series features a marquee matchup between All-Star point guards John Wall and Kyle Lowry. Okay, it’s not quite Steph Curry and Kyrie Irving going at each other, but it’s one of the best possible point guard battles in the East as they stars on the verge of greatness.

While it’s not exactly a bold prediction to place a LeBron-led team in their fourth straight NBA Finals, there’s no way to be certain who will emerge from the Western Conference.

The Western Conference playoffs should be a nail-biter. Every single first-round series will be a must-see. Unlike the Eastern Conference, most of the matchups are more equally balanced and will probably take a full seven game series to finish.

No. 1 Golden State Warriors vs. No. 8 New Orleans Pelicans

The Golden State Warriors made an early exit in the first round of last year’s playoffs, but have improved a lot since Steve Kerr became the Head Coach. They enter the playoffs with the number one seed and the best overall record at 65-17. This should be an easy matchup for them, despite former No. 1 draft pick Anthony Davis having solidified himself as an NBA star.

Anyone can agree that the “Splash Brothers” have been lighting it up all season — Curry and Klay Thompson are averaging a combined 21 points from three-point range on a combined 44 percent.

But how far can they go with their philosophy on three-pointers? As the great Byron Scott once said, “I don’t believe it wins championships. It gets you to the playoffs.”

No. 2 Houston Rockets vs. No. 7 Dallas Mavericks

The opening-round series between the No. 2 seed Houston Rockets and No. 7 seed Dallas Mavericks is tailor made for offensive lovers. Both teams finished the year in the top 10 for team scoring — Dallas at No. 3 with 105.2 and Houston in sixth with 103.9 points per game. Expect each game to be a high scoring one.

The Dallas Mavericks are an elite team. They could make some noise — potentially win it all — after acquiring point guard Rajon Rondo from the Celtics. One could argue that this year’s Maverick’s team is better than the Maverick’s roster that won the 2011 NBA Finals.

Unfortunately, out in the tough West, the best they could get was a seventh seed. The Rockets have relied on James Harden all season and now he won’t have to carry as much of a load in the playoffs. After missing 26 consecutive games to a knee injury, Dwight Howard’s return ensures that the Rockets have another consistent scoring source. This series is a tossup.

No. 3 Los Angeles Clippers vs. No. 6 San Antonio Spurs

The defending champion Spurs will look to begin their quest for a third consecutive Finals appearance against the No. 3 seed L.A. Clippers. The Spurs head into the postseason fully healthy with an aging roster.

There wasn’t that much of a “Lob City” in L.A. this season due to Blake Griffin’s elbow injury, which caused him to miss 15 consecutive games. Since then, Griffin has eased into old form and should be given an adequate amount of minutes in this difficult matchup.

No. 4 Portland Trail Blazers vs. No. 5 Memphis Grizzlies

The Trail Blazers will square off against the Memphis Grizzlies in yet another matchup that could go either way. Losing Wesley Matthews to an Achilles injury limited Portland’s potential over the course of the year. Even through tough circumstances, the body of work for the Blazers still stands with high-caliber players in Damian Lillard and Lamarcus Aldridge.

But the Grizzlies look more poised than ever to make a deep postseason run after trading for Boston’s Jeff Green. After moving Rudy Gay to Toronto, Memphis was lacking a wing player who can make opposing players work on the offensive end. Green does just that with 13.8 points a game since the trade. He will be an x-factor in this matchup.

With all of these great matchups, the 2015 NBA Playoffs will be something to remember when it’s all said and done.