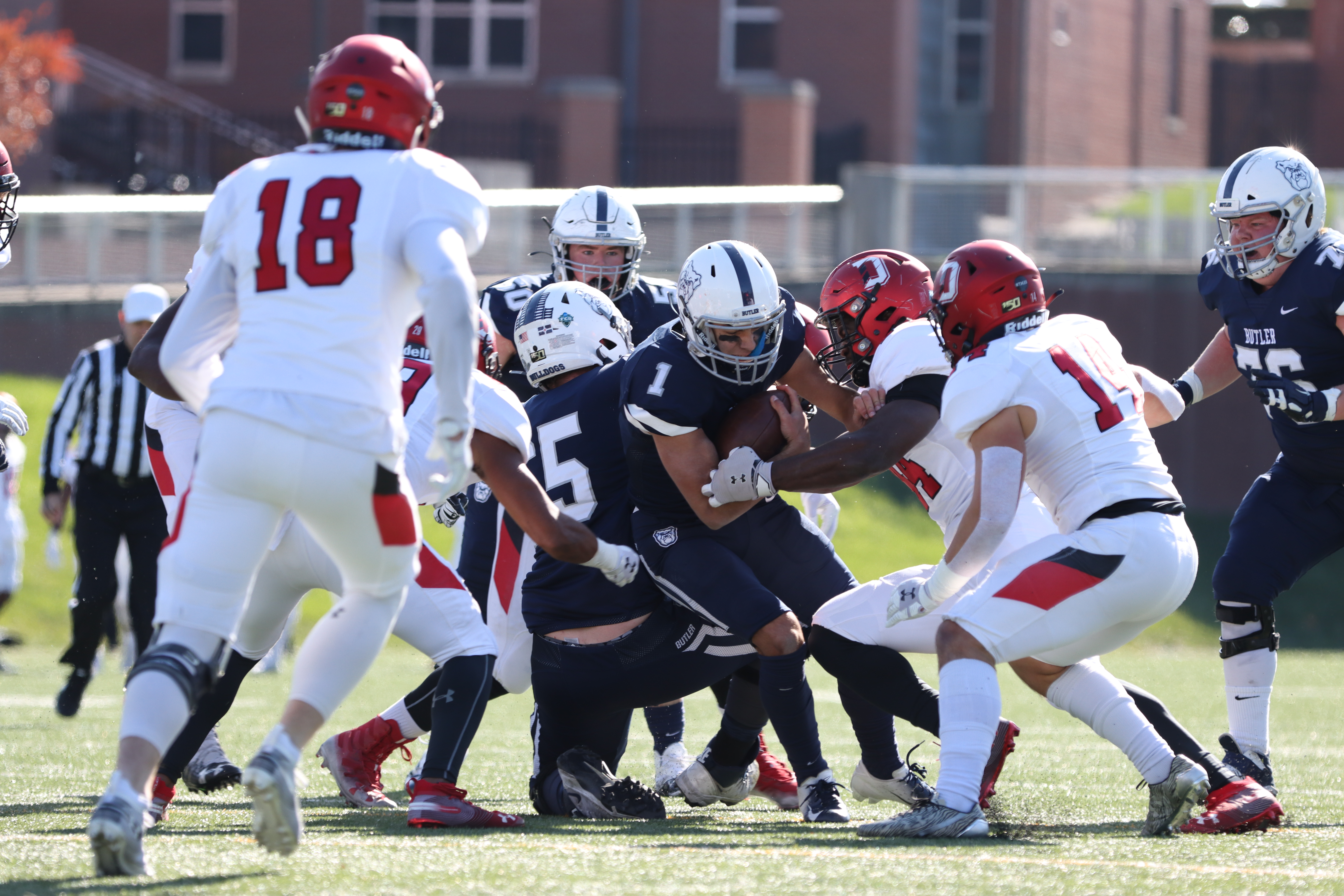 Nick Orlando fights his way through Davidson defenders during Butler’s 52-10 loss to the Wildcats on Nov. 9. Photo by Chandler Hart.

The Butler Bulldogs were defeated by the Davidson Wildcats 52-10 on Saturday, Nov. 9 at the Sellick Bowl. The Bulldogs fell to 2-8 on the year as the Wildcats improved to 7-3.

The Bulldogs started off the game with a monster 10-minute, 19-play drive that stalled out inside to two-yard line. This resulted in a 27-yard field goal by Drew Bevelhimer which gave the Bulldogs a 3-0 lead.

Following the opening drive, it would be all Wildcats for the rest of the game.

Led by a heavy run game that garnered up 255 yards in the first half alone, the Wildcats would respond with 45 unanswered points.

Early scores included a two-yard run by Keylan Brown — followed by a missed extra point — and a 14-yard pass from Tyler Phelps to Colin Errity. That gave the Wildcats a 13-3 lead.

The Bulldogs tried to muster a drive midway through the second quarter but were ultimately stopped on a fourth and two at the Wildcats 40-yard line.

The Wildcats would strike quickly after the turnover on downs with a 47-yard run by Jorell Story for a touchdown.

The offensive woes continue for the Bulldogs as Nick Orlando was intercepted by Jaylen Bolden, who made a circus catch for the takeaway.

The Wildcats would add two more scores before the half was out with a four-yard rush by Eli Turner Jr. and an 18-yard run by Wesley Dugger — followed by a missed extra point — giving the Wildcats a 33-3 lead at halftime.

The second half faired no different for the Bulldogs as the Wildcats continued to dominate on the ground.

Early in the third quarter, Dugger rushed it in for a three-yard touchdown followed by a missed extra point. That extended the Wildcats lead to 39-3.

Later in the fourth quarter, backup quarterback Louis Colosimo connected with Jayden Waddell for a 69-yard touchdown, which was followed by another missed extra point by Ragnar Schmidt — his fourth of the day.

The Bulldogs offense would find some life late in the fourth quarter as Nick Orlando would take it himself for an 18-yard touchdown.

The Wildcats would top off the game with an 11-yard run by Aris Hiilard. The Bulldogs went on to lose to the Wildcats 52-10.

The Bulldogs will look to get back on track next week against the Valparaiso University Crusaders. That game is at noon on Nov. 16 at the Sellick Bowl.