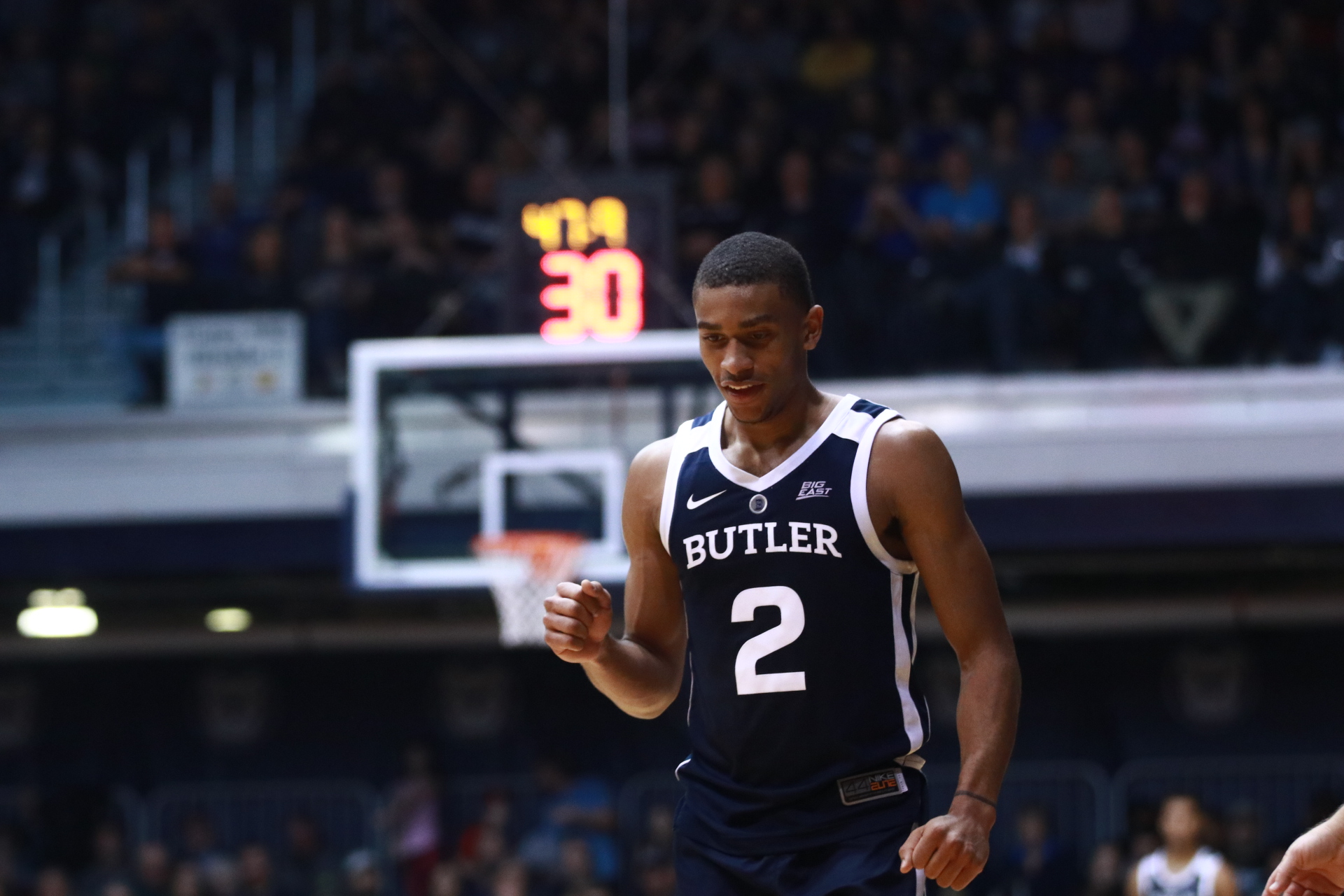 After Aaron Thompson’s career-high 18 points on Dec. 18, he dished out a team-high seven assists in Butler’s 71-54 win over UC Irvine. Photo by Jimmy Lafakis.

As Butler’s last home game of the calendar year, it only made sense to welcome the winter season with the most popular figure in the program for his birthday. It’s not Kamar Baldwin or Coach Jordan, try Trip!

And the team celebrated with the debut of some sweet-looking alternate uniforms.

It was immediately evident that sophomore Jordan Tucker was getting more comfortable with his role on the team.

Jordan Tucker has now seen 34 minutes of action for Butler. He has 27 points and 13 rebounds.

And he proved that he will contribute to where this team ends up come March.

Jordan Tucker raises #Butler's ceiling so much. Just adds an entirely new dimension to the offense with an elite shooter who can get to the free throw line off the bounce. He is a major difference-maker and it doesn't hurt that he is a very strong rebounder as well. #GoDawgs

Jordan Tucker is clearly going to contribute. He needs more and more run.

After scoring a combined nine points in the past two games, senior Paul Jorgensen seemed to nix his slump with a team-leading 19 points.

All eyes were on Aaron Thompson, too, to see how he would play after his 18 point breakout performance on Tuesday.

Aaron Thompson, who scored a career-high 18 points in his previous game, has taken two shots. But he has seven assists and is a nightmare for the Irvine point guard. A.T. does what is needed to win.#Butler

Another storyline from tonight was the debut of freshman Bryce Golden. He played mostly when the game was out of reach but nevertheless was good to see him out there and get some run.

Golden tips one in, gets a big cheer for his first bucket. Butler up 57-35.

In fact, this was a perfect game for Coach LaVall Jordan to experiment with all types of lineups to see what clicked.

At the end of the day, this was no cupcake. UC Irvine had taken down March Madness regulars like Texas A&M and Saint Mary’s this year, but Butler was not about to let their home non-conference winning streak end tonight. That streak will survive yet another season.

Final numbers… The Bulldogs are now 9-3 on the season #GoDawgs pic.twitter.com/BGrkUJOeMH

Butler basketball gets a bit of a break for the Christmas holiday as their next game is not until Dec. 29th, where they will travel to Gainesville, Florida to take on the Florida Gators. The game will tip at 4 p.m. and air on ESPNU.