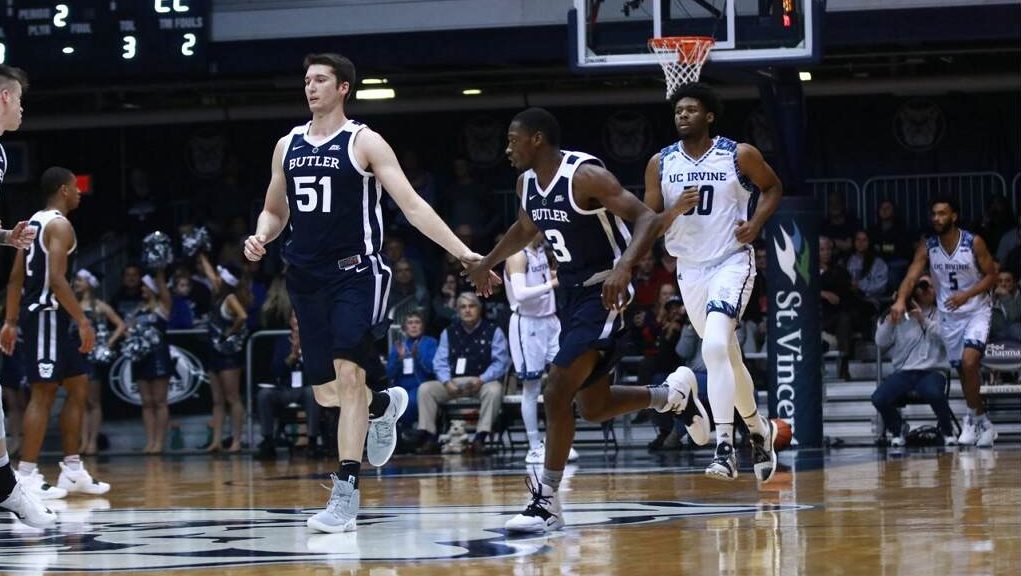 Nate Fowler and Kamar Baldwin celebrate following a play in Butler’s 71-54 win over UC-Irvine on Dec. 21. Baldwin scored 14 points in the contest. Photo by Jimmy Lafakis.

The Butler men’s basketball team picked up its 50th consecutive home nonconference win with a 71-54 victory over UC-Irvine on Dec. 21. Here’s a quick look at 10 key quotes from after the game.

On playing Butler at Hinkle: “[Let me] say what an honor it is to bring my team here to Hinkle Fieldhouse, play a college basketball game. Butler’s an excellent team. It’s a program we’ve tried to model our program after in many ways.”

On the game overall: “Tonight they did to us what we often do to other people. They raised the level of defense to a point where we couldn’t function very well early in the game and I give them credit for that. They’re good. … They showed us great respect by being as ready and motivated as they were. So congratulations to them.”

On his first meeting with coach Jordan: “I joked with LaVall, we were the first team he beat. I was the first coach he beat. So he probably wanted another piece of me. Went about the same way tonight as it did the first time.”

On the team’s strong start: “We talked a lot on the front end about just setting the tone early. The last game against Presbyterian we did not do that. So it was a big emphasis coming back into this one. And I thought we had really good energy early. Guys were connected, especially defensively, and that set the tone for the game.”

On UC-Irvine: “That’s a good team. Coach Turner [is] a good coach. I played him, now a second time. They’ve got a good program. They’ve got postseason tradition, so it’s definitely a good win for us.”

On Jordan Tucker’s adjustment to game action: “He’s out there with some guys that have been there before, so he can play comfortable. My message to him is the same as all these guys: be comfortable, be confident on offense. If you don’t play defense the way we play defense, you’ll be sitting next to me pretty quick.”

On Bryce Golden, who made his Butler debut against UC-Irvine: “Bryce and I went back and forth… him and his family just talking about his situation. It kind of came down to what he wanted to do, and he wants to play. And there’s an opportunity for us to have help with another guy at that position in the rotation.”

On his performance and his team: “I think I was just staying aggressive. Looking for my opportunities. My teammates did a great job of finding me. But the greatest thing with are team is that every night it could be somebody else. We’re a true team. We have different guys that can step up on any given night. Just because it wasn’t my night a couple times, other guys can step up and fill that gap, which is great.”

On the team’s recent offensive success: “I think we have a lot of firepower… Each guy is very capable of doing it on any given night, so that’s really helpful. We have really good chemistry with each other on the court and I think most importantly off the court…”

On the team’s improvements in recent weeks: “I would just say we’re coming to play with more energy…. That’s been one of the main focuses here. We’re just holding each other accountable, in practice as well… I just think it’s a team effort. Each guy wants to get better, and with that, the team elevates.”