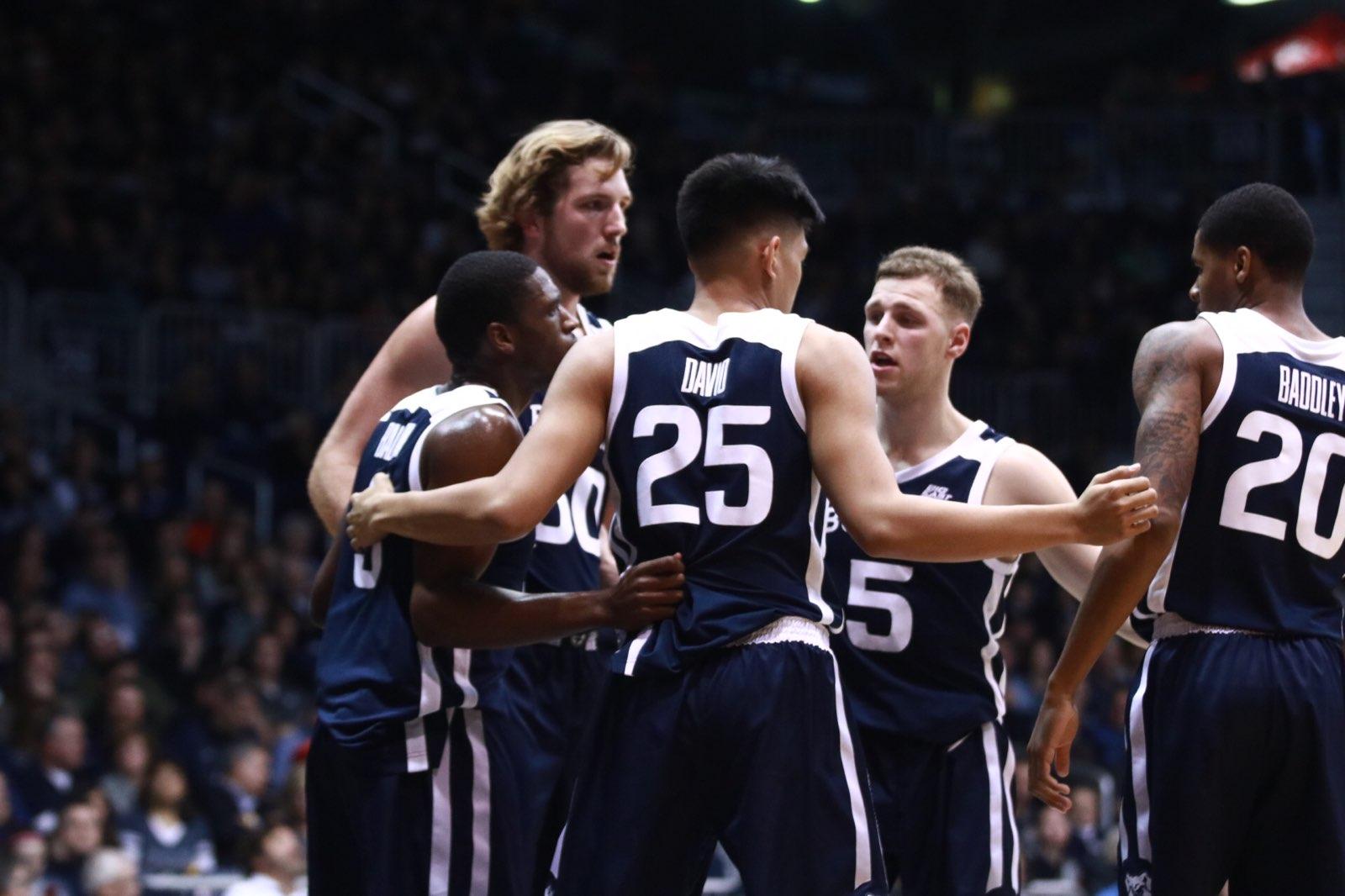 The Bulldogs huddle up during their win over UC-Irvine. Paul Jorgensen led all scorers with 19 points. Photo by Jimmy Lafakis.

The Butler men’s basketball team picked up its tenth victory of the season, a 71-54 win over UC-Irvine. Butler scored the first points of the game and led the rest of the way. Here are three takeaways from an incredibly impressive performance.

The Anteaters came to Hinkle Fieldhouse with a perfect 5-0 record on the road, including wins over Texas A&M and Saint Mary’s. What Butler did to them defensively was remarkable. UC-Irvine shot 28 percent in the first half and did not record a single assist while scoring a meager 17 points. The Bulldogs also made the Anteaters one-dimensional, holding them without a made 3-pointer until the 17:58 mark of the second half. Butler’s been an excellent defensive team all season but it’s never done something quite this impressive.

UC-Irvine ended up shooting 35.3 percent from the field for the game, the third-lowest total of any Butler opponent this season. Aaron Thompson and Kamar Baldwin gave the Anteaters’ guards fits and Sean McDermott deserves an immense amount of credit for holding his own against bigger opponents. If the Bulldogs can find a way to guard in a similar fashion during Big East play, they have as good a chance as any team to win the conference; they were that good on the defensive end.

2. The Bulldogs are getting sloppy.

For everything the Bulldogs did well against UC-Irvine, they struggled to take care of the basketball for the second game in a row. Butler entered the week averaging 10.1 turnovers per game, which ranked ninth nationally at the start of the Presbyterian game. As a team, the Bulldogs had committed more than 10 turnovers on only two occasions. They coughed the ball up 13 times against the Blue Hose and another 13 times in this game.

While 26 turnovers over a two-game stretch isn’t necessarily a major concern, it is something to take note of. The difference between 10 and 12 turnovers per game could be absolutely massive in the Big East. As the level of competition increases, Butler needs to make sure it continues to make smart decisions with the basketball. The Bulldogs have been too careless these past two games.

Tucker now has two games at Hinkle Fieldhouse under his belt. In 26 minutes on the floor in those two contests, he’s scored 24 points, made five of his seven 3-point attempts and grabbed 12 rebounds. He followed up a career-high 10 points in his home debut with a new career-high of 14 against the Anteaters. Tucker is contributing to the team in a meaningful way without disrupting the chemistry and identity the Bulldogs built while he was sitting out. It’s difficult to imagine his Butler career getting off to a better start.

There is absolutely no question Tucker makes the Bulldogs a better team. He’s an excellent shooter who is capable of creating his own shot, which helps take pressure off of Baldwin. His size and rebounding ability also make him a welcome addition to the roster. Tucker gives Butler a suitable replacement for McDermott when he takes a seat and provides LaVall Jordan with more flexibility in terms of lineups. It took Tucker a game to get up to game speed, but he’s been as good as advertised so far.