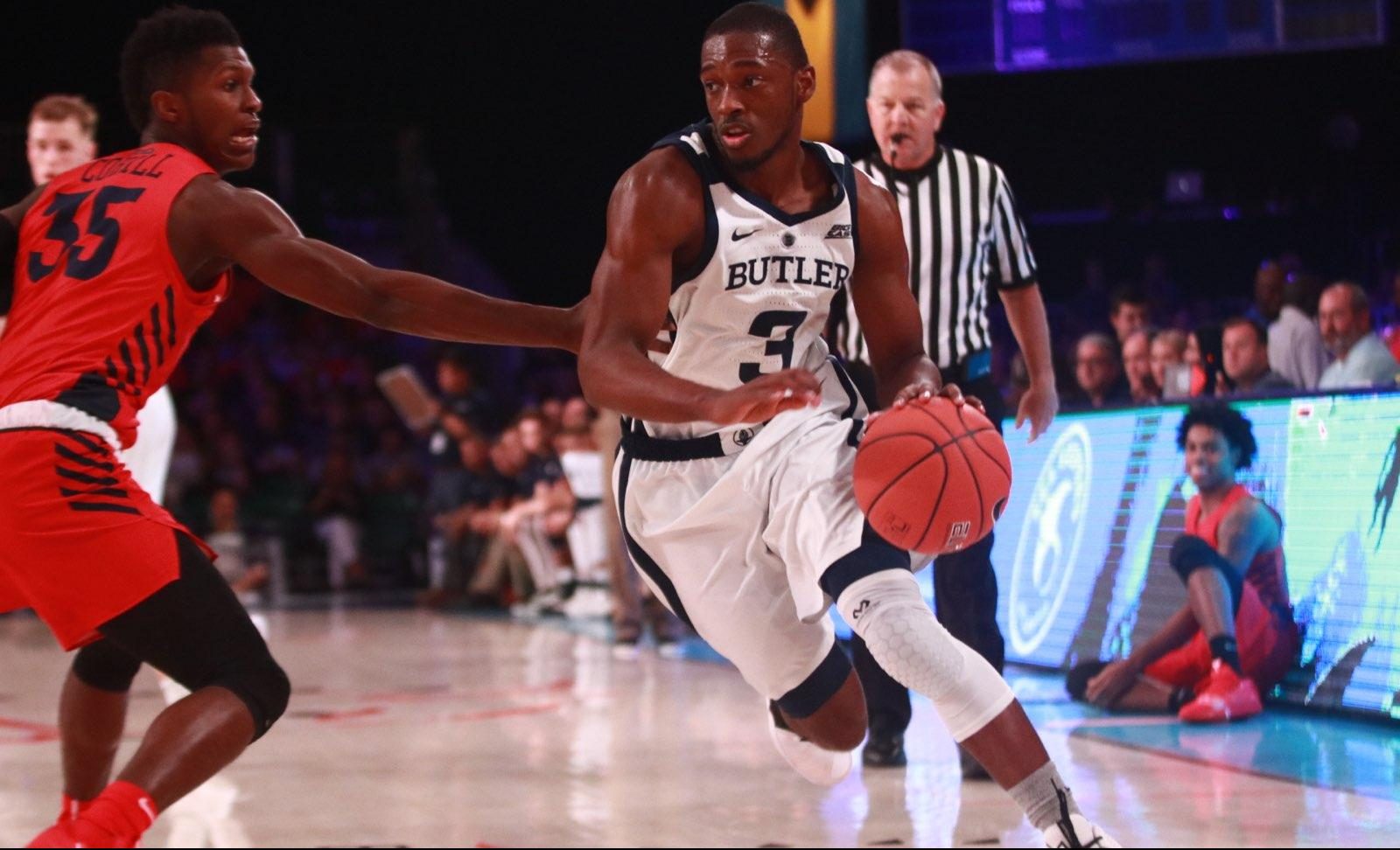 Kamar Baldwin drives to the basket against Dayton. Baldwin finished with 11 points and seven assists in the loss. Photo by Jimmy Lafakis.

The Butler men’s basketball team suffered its first loss of the season, falling to Dayton in the quarterfinals of the Battle 4 Atlantis tournament, 69-64. Butler rallied late but never got closer than 63-58 with 45 seconds left. Here are three takeaways from a rough performance.

1. The first half couldn’t have gone much worse offensively for Butler.

The Bulldogs shot 33 percent from the floor and did not score a single point for the final 4:15 of the half. As a result, they headed into the locker room down 37-26. The only player to record an assist was Kamar Baldwin and Butler finished with as many helpers — five — as turnovers. Unlike their first three games, the Bulldogs were stagnant and unable to get into any kind of rhythm offensively. The excellent ball movement Butler displayed inside Hinkle Fieldhouse was nowhere to be found. Through 20 minutes, this looked like a completely different team on the offensive end.

Without question, this was Butler’s worst half of basketball. The Bulldogs were six-for-19 on 2-point attempts and four-of-11 from three. Take away Sean McDermott, and the rest of the team only combined for 16 points. To compound the issue further, their only free throws came from a technical foul. When shots aren’t falling, the free throw line can be a team’s best friend until things start to click. The Bulldogs were not aggressive attacking the basket, making it even harder to score.

2. The Bulldogs got dominated inside.

Josh Cunningham posed the biggest test to Butler’s bigs so far this season. He had his way with them, scoring 18 points on 64 percent shooting while also grabbing eight rebounds. The Flyers outscored the Bulldogs 34-26 in the paint and had the same amount of rebounds despite being the smaller team. Joey Brunk really struggled to make an impact, finishing with three points and four rebounds. On the defensive end, both Brunk and Nate Fowler failed to offer any real resistance around the rim.

The lack of a presence on the interior is the most concerning takeaway from this game. For the Bulldogs to have the kind of season they’re capable of, they need to become a much more physical team. Dayton got way too many good looks around the rim, whether it was off a drive or from a feed into the post. Defense inside the paint was one of the major concerns about this team heading into the season, and with good reason. Unless something changes fast, teams are going to continue to abuse Butler inside.

3. This is eerily similar to what happened last Thanksgiving.

In their first game at the PK 80 tournament, Butler lost to Texas, 61-48, in their worst offensive game of the season. They responded with wins over Portland State and Ohio State to leave Oregon with a 2-1 record. The come-from-behind victory against the Buckeyes served as a springboard for a season that ended in a fourth straight NCAA Tournament appearance. Butler has an opportunity to do the exact same thing at Battle 4 Atlantis.

If the Bulldogs can come away with two wins, the tournament is absolutely a success, regardless of how poorly they played in this game. Of course, that requires beating two very good opponents in two days. At the very least, getting a victory in the second game ensures they won’t leave the Bahamas winless. We’re going to learn a great deal about this team based on what happens the next two days. This loss can be a great learning experience or snowball into a string of poor performances depending on how Butler responds.