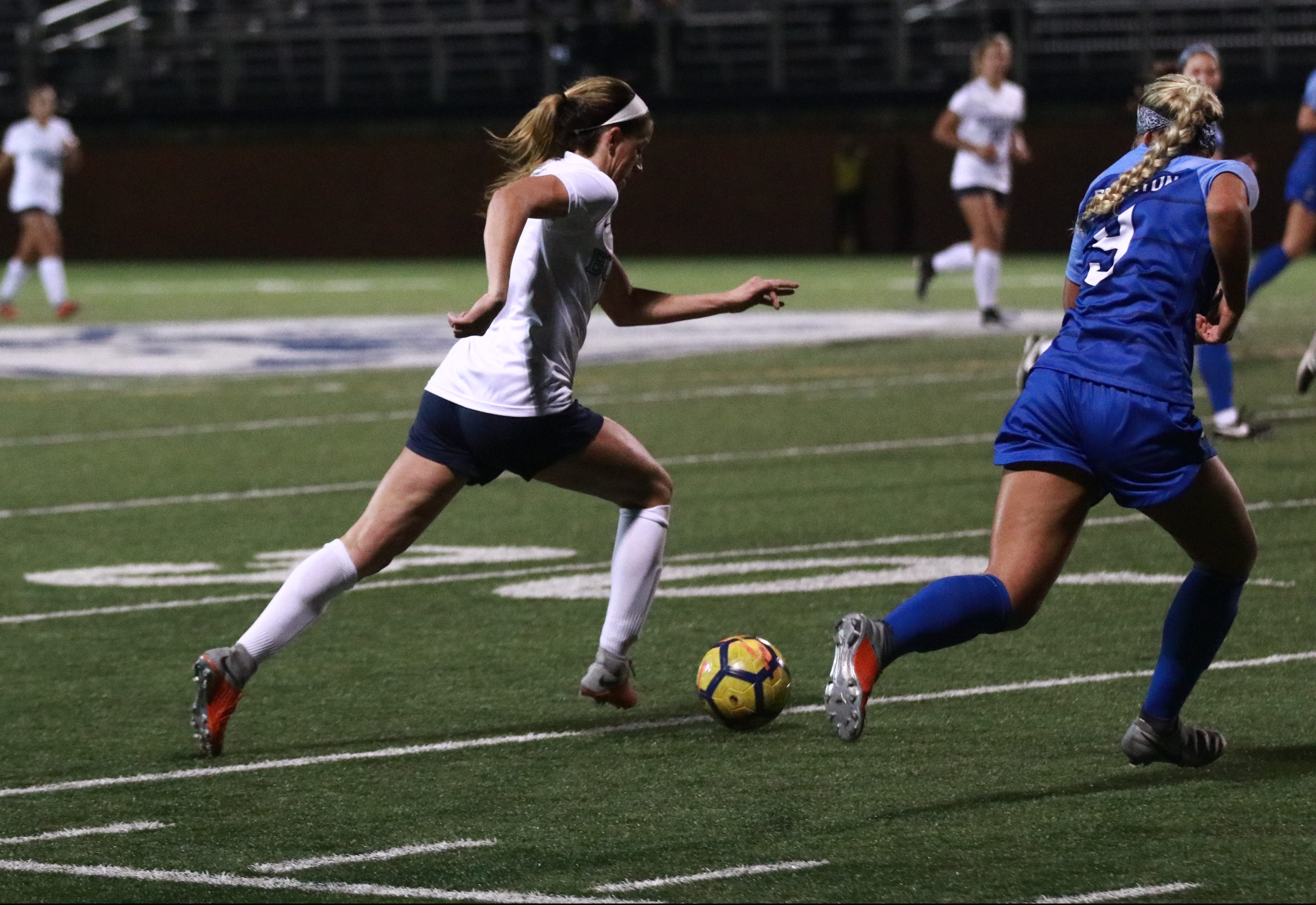 Paige Monaghan dribbles the ball against Creighton. Monaghan and the Bulldogs finish up their regular season on the road at Villanova. Jimmy Lafakis/Collegian file photo.

As the regular season comes to a close and the postseason nears, here’s everything you need to know about the Butler women’s soccer team.

The Bulldogs split their last two Big East matchups, a pair of games against Creighton and No. 4 Georgetown, moving to 11-5-1 on the season.

In their final home match of the regular season, Butler defeated Creighton 1-0 on Oct. 18 behind a 76th minute goal from senior forward Halle Stelbasky. The Bulldogs poured 19 shots on the Blue Jays before freshman forward Anja Savich fed the ball to Stelbasky, who hooked the ball into the far right side of the net.

Traveling east to take on the fourth ranked and undefeated Hoyas, Butler fell 2-0 after a pair of second half goals propelled Georgetown to a win on Oct. 21. The Bulldogs controlled the tempo in the first half, but the Hoyas flipped the script to defend their home turf and win the match in the final 45 minutes.

The Hoyas clinched their second consecutive Big East regular season championship with the win and secured the No. 1 seed in the conference tournament.

With postseason implications on the line, Butler will wrap up their 2018 regular season on the road against Villanova on Oct. 25.

After starting the season 9-4, the Wildcats come into the match following four consecutive one-goal losses, which dropped them to eighth in Big East standings. Villanova has fallen to 9-8 after a 1-0 road loss to DePaul in their last matchup.

Butler is 3-2 against Villanova since joining the Big East and has won each matchup over the last three seasons. The Bulldogs have outscored the Wildcats 7-1 in those meetings.

The first round of the Big East Tournament will kick off on Oct. 28 when the No. 3 and No. 4 seeds host the No. 5 and No. 6 seeds. Winners will advance to play the top two seeds on Nov. 1 in the Big East tournament semifinal. The championship is set for Nov. 4.

Though they have already locked in a home match during the Big East Tournament, the Bulldogs are still vying for the final Big East conference tournament quarterfinal bye. Butler currently sits with 16 points and is tied for second place with St. John’s.

With the top six teams in the Big East standings qualifying for the Big East Tournament, two of the six spots have yet to be determined heading into Oct. 25. Georgetown, Butler, St. John’s and Xavier have all clinched spots.

Aside from the Hoyas, who sit in the top spot, where teams will place is up in the air heading into the final regular season gameday.

If Butler and St. John’s post the same result, the Red Storm own the tie-breaker after defeating the Bulldogs 2-1 on Oct. 7.  St. John’s plays host to sixth-place DePaul for their final regular season game.

Villanova, who is still in play for a spot in the Big East tournament, will have their season on the line when hosting the Bulldogs tomorrow afternoon. With a win, depending on other outcomes in the Big East, the Wildcats could move up as far as the 5th seed in the tournament.