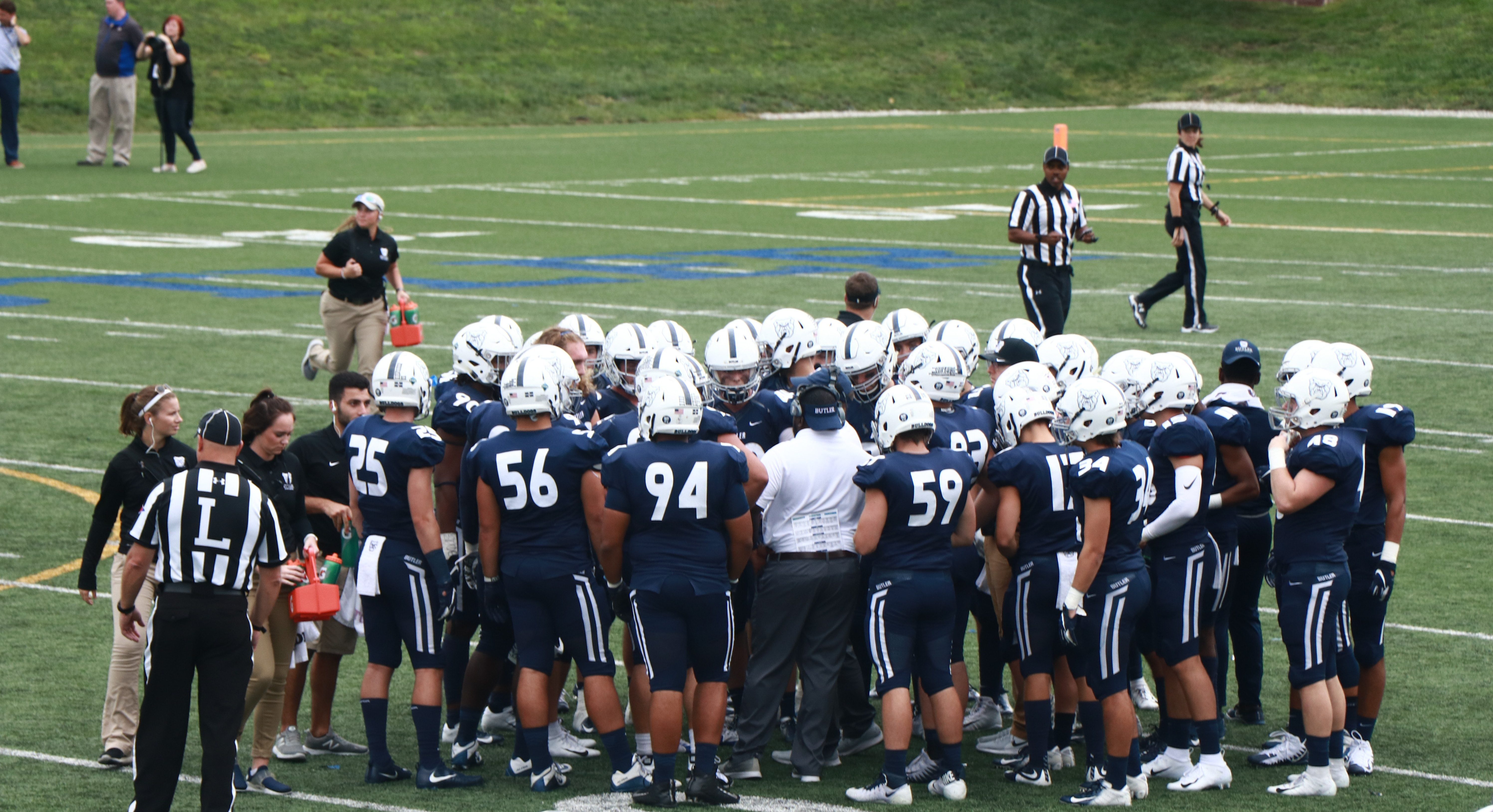 The Butler football team gathers on the field during a game this season. The team returns to action at Valparaiso on Oct. 13. Jimmy Lafakis/Collegian file photo.

The Butler University football team lost their first PFL game of the year on Oct. 6, falling to Drake University 36-6 on the road.

Two Butler punts started the game, with a Drake punt in between.

A Drake fumble, recovered by senior defensive lineman Matt Hawkins near midfield, put Butler’s defense in control early after a forced three-and-out and the turnover.

An offensive drive that went backwards followed by a 42-yard touchdown pass for Drake flipped the script. Butler was unable to flip it back, throwing an interception on the very next play from scrimmage.

Two Drake punts and a Butler punt maintained the 7-0 Drake lead well into the second quarter.

Another interception thrown by Butler senior quarterback Will Marty, again on the first play of a drive, set Drake up three yards from the end zone after a lengthy return. It took Drake only one play to punch it in and extend their lead to 14.

Butler responded with a 15-play drive that eventually ended with a turnover on downs on a fourth and short at the Drake 17-yard line. Drake took their 14-0 lead into halftime.

Butler’s defense showed promise again at the start of the second half, forcing a three-and-out with help by two tackles for short gain by junior linebacker Mason Brunner. Again, however, Drake flipped the script, putting another touchdown on the board after a Butler punt.

Another Butler punt made way for another Drake touchdown, a 23-yard pass following a long return. The extra point was blocked by senior linebacker Carter Raleigh, keeping Butler within 27.

Drake continued their dominance of the night later on with a 20-yard touchdown pass, putting them up 34-0.

Will Marty’s pass to junior receiver Stephen Dennis in the middle of the fourth quarter finally put Butler on the board, but, emblematic of Butler’s night, it wasn’t without blemish.

The extra point was blocked and returned to the endzone, which results in two points for the defending team. The special teams play brought the score to 36-6.

Redshirt freshman quarterback Sam Brown made his first three pass attempts as a Bulldog during Butler’s last possession, which all fell incomplete in Brown’s relief of Marty.

Freshman running back Kavon Samuels got his first five carries for Butler as well at the end of the game, totaling 30 yards.

Butler fell to 3-2 overall and 1-1 in conference play with the loss.

The Bulldogs will travel to take on rival Valparaiso on the road on Oct. 13.