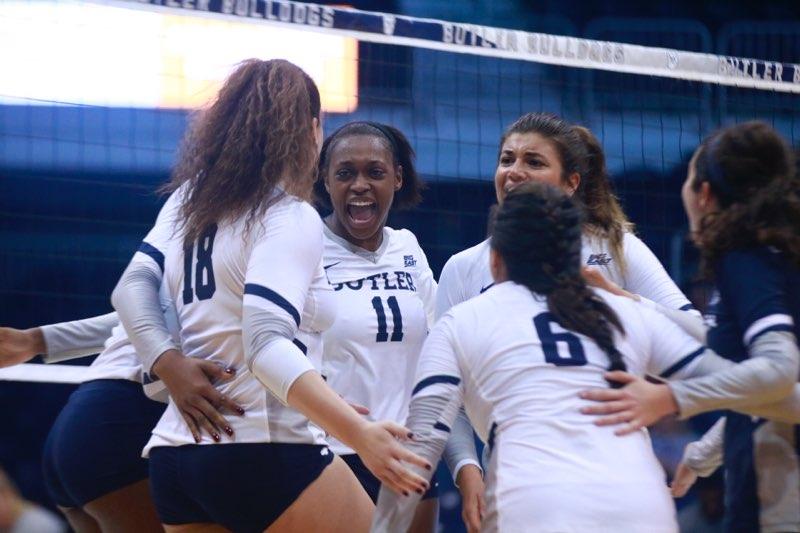 The Butler volleyball team celebrates following a play during the Top Dawg Challenge. The team is now 1-5 on the season after picking up their first victory. Photo courtesy of Jimmy Lafakis.

The Butler University volleyball team went 1-2 at the Top Dawg Challenge on Aug. 30 and Sept. 1 at Hinkle Fieldhouse. The matches were Butler’s first three home contests of the year.

After falling to Auburn University on Friday night, the Bulldogs split a pair of games on Saturday against Eastern Illinois University and Illinois State University.

Butler fell 25-23, 25-19, 25-18 to the visiting Tigers on the first night of the tournament. Sophomore outside hitter Natalie Ravenell led the Bulldogs with 12 kills, while senior setter Maddie Freiwald tied a match-high with 30 assists. The Bulldogs recorded 33 digs in the match, as opposed to Auburn’s 25.

“I see our ability to play incredible defense as a good area of our game to build around,” assistant coach Sofia Sanchez said. “Our defenders did an all-around fantastic job. We are definitely looking to feed off our defense and improve our transition offense.”

“We play well in stretches,” head coach Sharon Clark said. “But we can’t string it all together. We have to get to practice and get to business.”

“We definitely see our weak spots and can focus on what we need to work on all week,” Lilly said. “We will work on keeping our energy up throughout every minute on the court and coming back from small deficits quickly.”

The Bulldogs will hit the road to participate in the Arkansas Classic on Sept. 8 and 9.