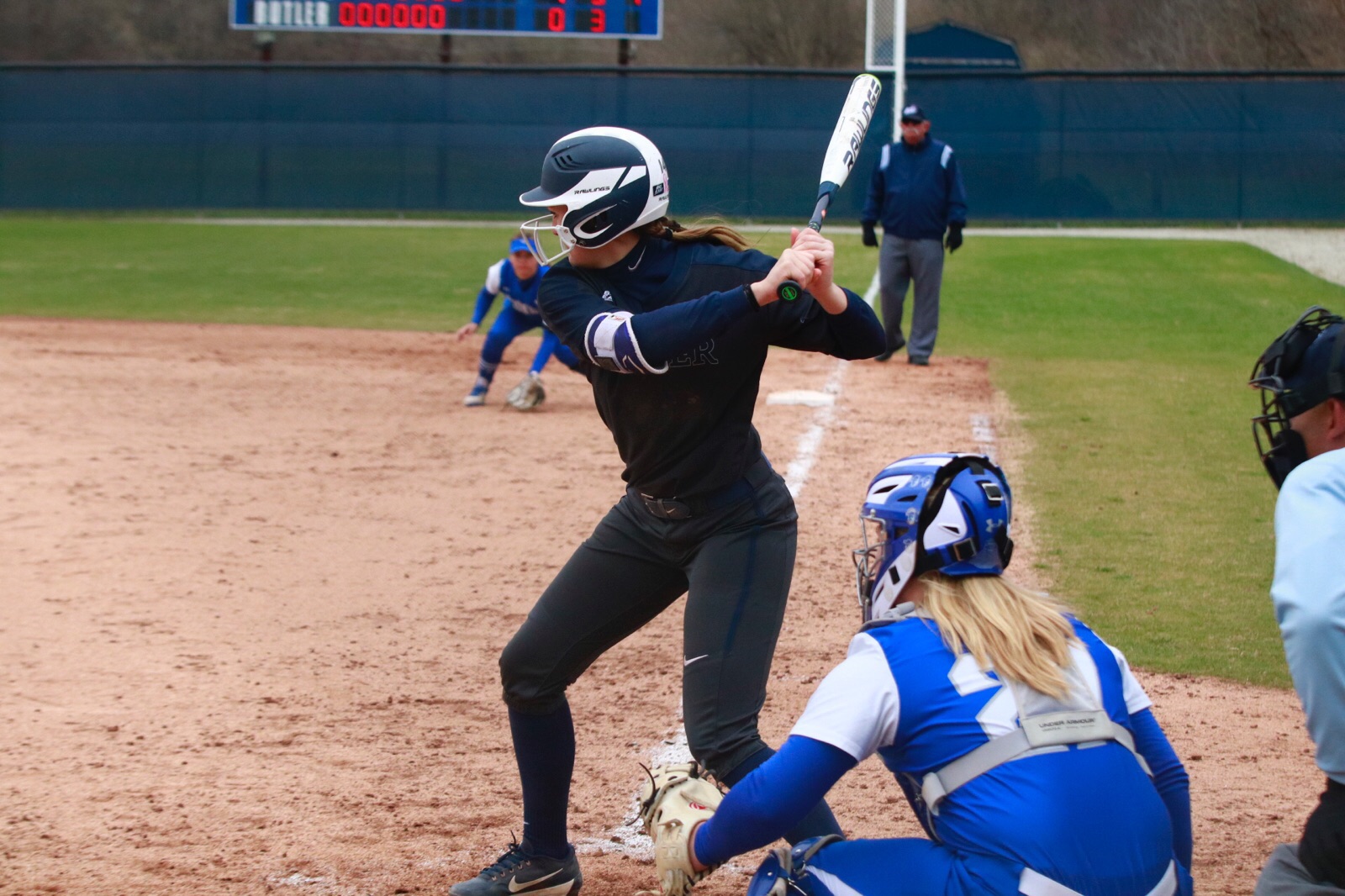 Madi Christiansen at the plate for the Bulldogs. Christiansen had two hits in the weekend series against Seton Hall. Photo by Jimmy Lafakis.

The Butler University softball team opened up Big East play with a 2-1 weekend at home against Seton Hall University from March 30-31. The Bulldogs are now 11-17 on the season.

Butler defeated Seton Hall in both games of a doubleheader on Friday, March 30, to get off to a 2-0 start in Big East play.

In the first game, Seton Hall jumped out to an early lead with a four-run first inning. Freshman pitcher Alyssa Graves walked the first three Pirates’ batters before giving way to junior Kaitlin Doud, who threw seven innings in the contest.

The Bulldogs were able to respond with four runs of their own in the bottom of the first inning. An RBI single from senior infielder Alyssa Lach, a two-run triple from Doud, and a one-run single from sophomore infielder Christina Candotti accounted for the scoring.

Seton Hall added another run in the top of the second inning, but that would be all the scoring for the Pirates. Butler scored two runs in the bottom of the frame on an RBI single by senior outfielder Sarah Dixon and sacrifice bunt by Lach.

The Bulldogs then added two insurance runs in the fifth inning on a two-run triple by Doud to secure the 8-5 victory.

Doud allowed six hits and two earned runs over seven frames to pick up the victory. At the plate, she went 2 for 3 with four RBI and a run scored.

The second game of the day was all Butler, as Graves and sophomore pitcher Gabbi Schnaiter combined to one-hit the Pirates. The Bulldogs scored three runs in both the fourth and fifth innings for the 6-0 win.

Six Butler players had an RBI in the game, including junior outfielder Jenna Foreman, freshman infielder Claire Gilliland, and junior catcher Sammy Andersen, who all had two hits.

Graves struck out six and walked five over 5 ⅔ innings before giving way to Schnaiter, who pitched the final 1 ⅓ frames.

Offense was limited in the final game of the weekend, with both teams managing just three hits. A first-inning sacrifice fly by Seton Hall proved to be the difference as the Pirates won 1-0.

Butler’s three hits came from Lach, Foreman, and sophomore infielder Madi Christiansen. On the mound, Graves gave up one earned run and walked three over 1 ⅓ innings before giving way to Doud, who threw 5 ⅔ scoreless innings to complete the game.

The Bulldogs return to action on April 5 at home against the University of Evansville before a three-game home series against Creighton University on March 7 and 8.