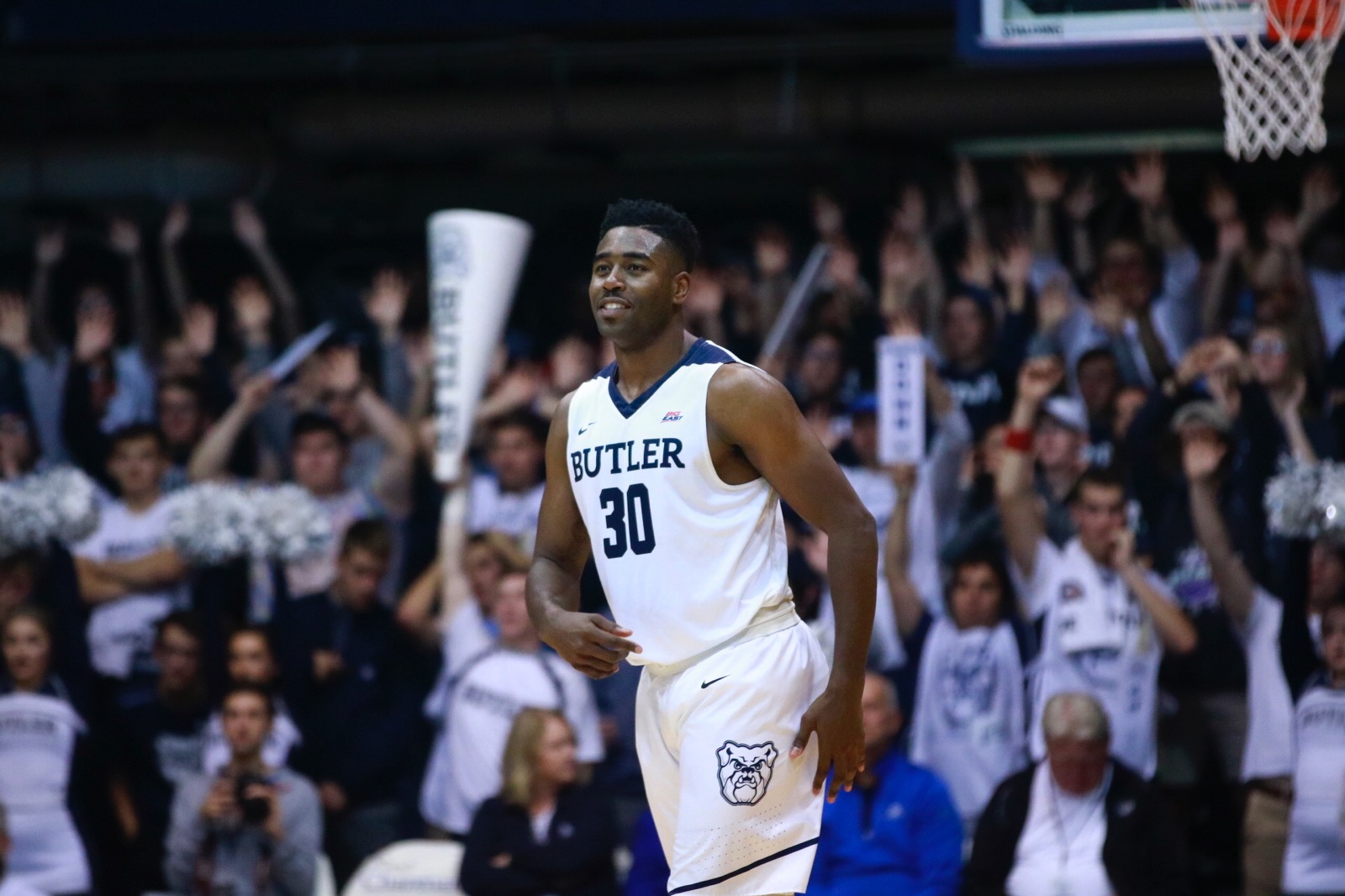 Kelan Martin glances at the action down the court in a matchup against Princeton on Nov. 12. The senior forward wrapped up the night with 20 points and 14 rebounds. Photo by Jimmy Lafakis.

Facing a quick turnaround two days after their season opener, Butler basketball fans looked less stressed after the first 10 minutes of play once the Bulldogs distanced themselves from Princeton. Backed by a 4-for-4 performance from the 3-point arc, the Ivy League team cut their deficit to render the score 20-19.

And again, the home crowd went through brief periods of anxiety in the second half when Princeton refused to go quietly and closed the gap to 72-68 in the last five minutes.

Butler would eventually regain control and hand the Tigers an 85-75 loss. The team has now won the first two games of the 2017-18 season under new head coach LaVall Jordan,

“I thought that was a great college basketball game,” Jordan said. “Great environment.”

Coach @LaVall_Jordan with Pete Gillen as the Bulldogs take 41-31 lead into the locker rooms pic.twitter.com/QgAJY148ej

“We had one day to prepare for a team like that,” Jordan said. “They’re intricate offensively, the spacing, the cutting, the timing. So our scout team who stepped in and helped prepare us to get ready did a great job.”

Led by Princeton’s head coach Mitch Henderson, an Indiana native, the Tigers were 14-0 in the Ivy League and advanced to its 25th NCAA tournament last season.

After a convincing 82-64 win against Kennesaw State, Butler struggled to control Princeton’s shot selection and picked up 24 personal fouls, an aspect the Tigers took full advantage of. Tyler Wideman fouled out in the last minute while Kelan Martin and Nate Fowler had four each. The visitors shot 61 percent from the field and 66 percent from the 3-point range.

“They’ve got so many guys who can shoot it — you’ve got guys who you’ve got to get them off the line,” Jordan said. “And then, guys like [Amir] Bell and [Myles] Stephens who can drive and finish. You’re in a little bit of a paradox. If you help, they’re going to make it.”

Offensively, Butler gained control of the game behind forward Martin’s team-high 20 points on the night.

“Really proud of this guy,” Jordan said, and gestured to Martin. “He’s growing as a player — a more complete player.”

The senior also led the team with 14 rebounds and three assists, and scored 16 of his 20 points in the second half. Martin cited patience as a key part of his play during the game, and said pacing was an aspect he worked on over the summer.

“The game opened up a lot more and they started collapsing so I continued to take good shots for the team and just getting to the basket,” Martin said.

As a team, the Bulldogs shot 54 percent from the field and were 18-for-21 from the free throw line, an improvement after going 7-for-12 in foul shots against Kennesaw State. Guards Kamar Baldwin and Aaron Thompson scored 15 points each to add to the win.