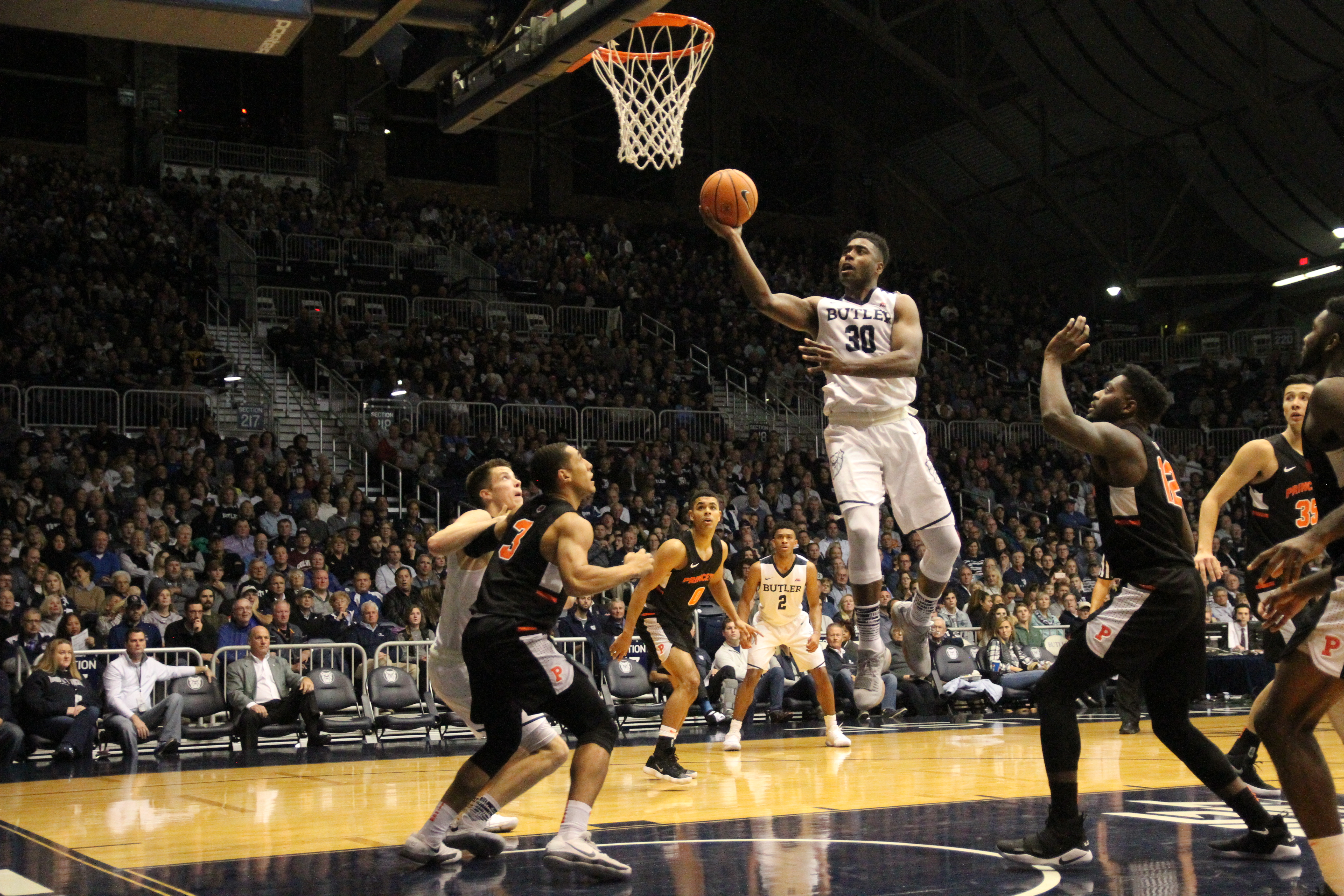 Senior Kelan Martin leaps for a layup against Princeton on Nov. 12. Photo by Zach Ballavia.

Who: Butler vs. Maryland

Wasting little time after games on Nov. 10 and Nov. 12, the Butler University men’s basketball team will face Maryland tonight as part of the third annual Gavitt Tipoff Games. The series pits matchups between Big Ten and Big East conference teams. Butler hosted Northwestern last year in the program’s first Gavitt game. The contest featured a game-winning shot in the final seconds from then-freshman Kamar Baldwin to cap the score at 70-68 and put the Bulldogs on top. Head coach LaVall Jordan and the team will try to replicate the same success against Maryland.

Butler survived a late surge from Princeton in the final five minutes of the game on Nov. 12 to beat the Tigers 85-75. As a team, the Bulldogs shot 54 percent from field and were 18-for-21 from the free throw line, an improvement after going 7-for-12 in foul shots against Kennesaw State.

Butler thrived in the paint, holding a 50-26 point advantage over their Ivy League opponent. Kelan Martin tallied just four points in the first half, but followed with 16 points in the final 20 minutes. Guards Kamar Baldwin and Aaron Thompson scored 15 points each to add to the win.

Last season, Maryland was 24-9 overall and earned a NCAA Tournament first round berth before falling to Xavier University in the first round. The Terrapins are 28-2 in non-conference home games since the 2014-15 season.

The last and only time the two teams met was in 2007, when Butler beat Maryland in the second round of the NCAA Tournament. Jordan was an assistant coach for Butler at the time while Brandon Crone, current director of basketball operations, was a senior on the team.

Twenty points in back-to-back games and a career-best 14 rebounds against Princeton converted into Big East Player of the Week honors for senior Kelan Martin. The forward also claimed a spot on the John R. Wooden Award watch list, which recognizes the most outstanding college basketball player at the end of the season. Martin was the sole Butler representative on the preseason Big East first team after averaging 16 points and 5.8 rebounds per game last year.

The Louisville native was originally recruited by current Boston Celtics head coach Brad Stevens, committed to play under Brandon Miller, was coached by Chris Holtmann for three years and will now finish his college career with LaVall Jordan. Two games into the 2016-17 season, Martin has 1,344 career points, good for 20th on Butler’s all-time list.

Call it a parting gift from former head coach Chris Holtmann — Butler’s season opens with four games in nine days. The Bulldogs faced a quick turnaround over the weekend, playing Kennesaw State and Princeton with only one free day sandwiched between. After facing Maryland, they host Furman University on Saturday. On Nov. 23, Butler kicks off the Phil Knight Invitational in Oregon against University of Texas. Win or lose, the team will still play three games in four days.