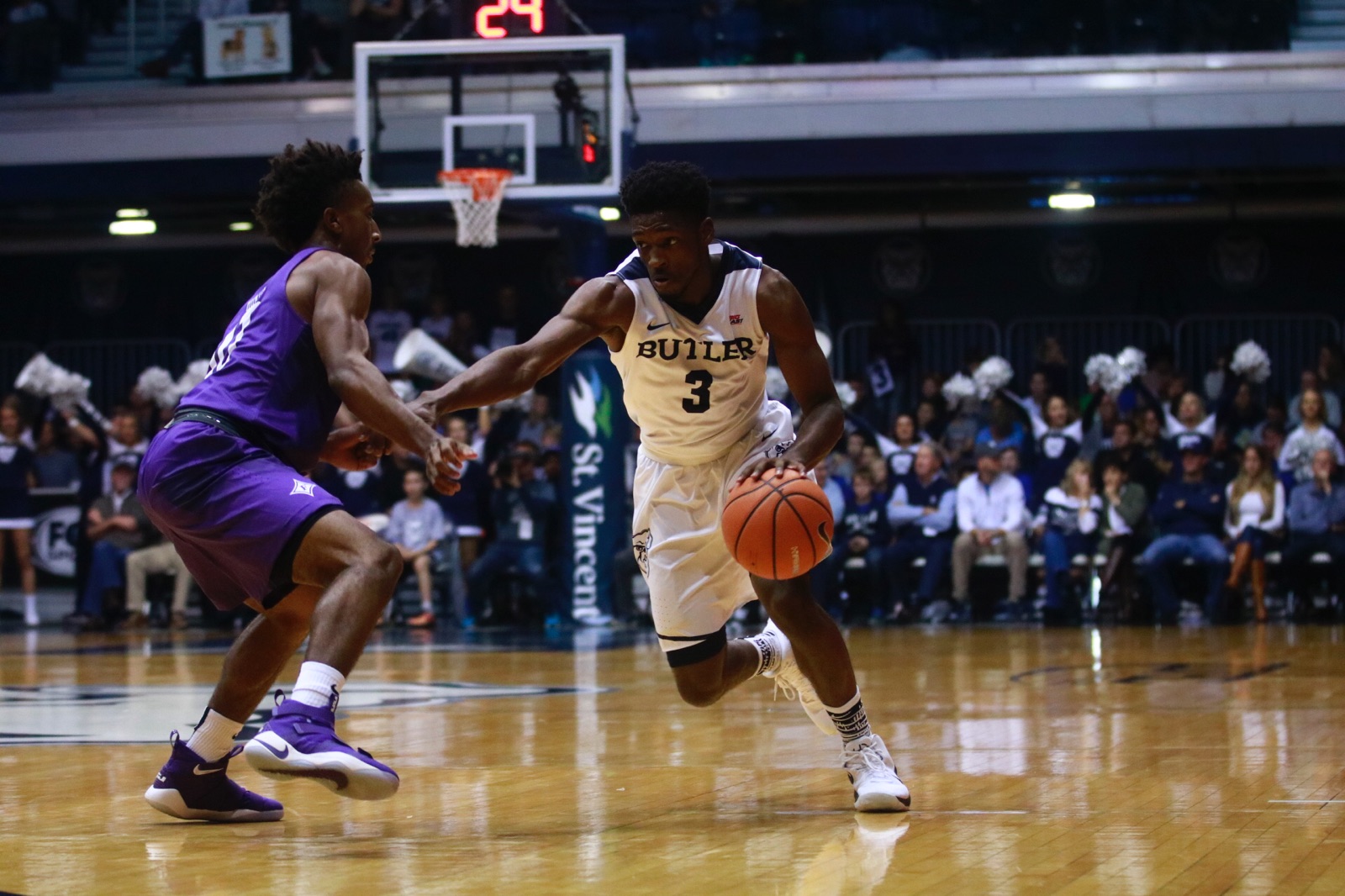 Kamar Baldwin drives to the basket against a Furman opponent. Baldwin finished the game with 18 points. Photo by Jimmy Lafakis.

Bouncing back from a loss at Maryland, the Butler men’s basketball  team crafted an 82-65 home win over Furman University to open the Phil Knight Invitational, which will carry into this week at Portland.

After receiving Big East Player of the Week for two 20-point games, Kelan Martin scored just eight points for a quiet afternoon. Martin’s first field goal didn’t materialize until there were 8:39 minutes left in the second half.

Forward Tyler Wideman led with 19 points, just one shy of a career-high to celebrate his birthday. His seven rebounds on the game was also a team high.

That’s how you celebrate a birthday. pic.twitter.com/eWc8zdmbeU

“Thought that was really nice of the guys to reward Tyler with 19 points for his birthday,” head coach LaVall Jordan  joked. “I can’t wait for mine to see what I get.”

Wideman, for his part, credited teammates for finding the senior when he was open and attributed the win to defense.

“I think on defense we got more stops and we were back to our normal selves,” Wideman said.

Defensively, Butler prevented a Furman basket long enough to go on an 11-0 scoring run just past the 10 minute mark of the first half, rendering the score 36-26 to take the lead. The Bulldogs continued to hold the point advantage for the remainder of the game, featuring a lead as large as 20 points. Butler outscored Furman 34-10 in the paint.

“We were slowing down and seeing guys at the rim we were missing last game,” Jordan said.

Quick start to the second half by Sean McDermott. He has 12 and Butler has a 49-39 lead with 16:33 to play. pic.twitter.com/XUXypfGmRa

The game marked Butler’s best in terms of assists this season, recording 19 assists compared to their last game at Maryland, which only saw eight total assists from the Bulldogs.

“We were sharing the ball great and making a lot more passes,” Jorgenson said. “That was something we emphasized all week. It’s something where we watched the Maryland film and thought we were a little selfish.”

McDermott, Martin and Aaron Thompson had four assists each.

“We overshared a few times,” Jordan said. “We don’t like that part, but we did find each other.”

Butler will travel to Portland on Nov. 23 for the Phil Knight Invitational, where they will face Texas at 7 p.m. Win or lose, the school will play three games in four days. Butler could potentially face Duke University in the second round for a rematch of the 2010 Final Four.