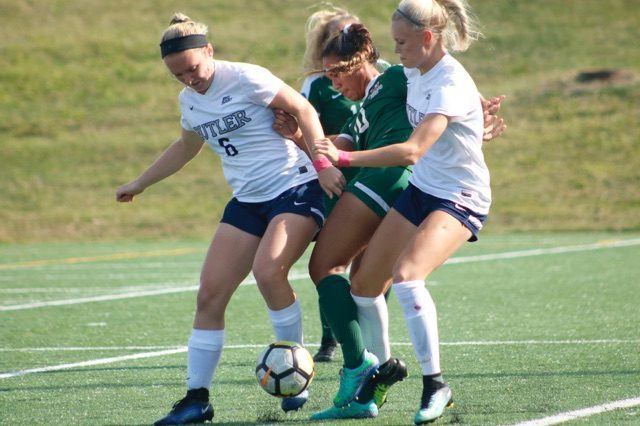 Defenders Julia Leonard (left) and Amanda Kowalski battle with an opponent for the ball in Butler’s win over Cleveland State on Sept. 3.

Senior defender Christy Chou scored her first goal of the season in the 44th minute. Chou was assisted by Senior midfielder Brenna Pawelkowski and junior midfielder Alex Holmes. It was Butler’s first goal in the first half this season. Though mostly a defender, Chou was put into a forward position to score the goal.

“As a defender playing forward, it puts it in a different perspective,” Chou said. “As defense you have certain ways to think about it. And as offensive player, you kinda know what they’re thinking.”

The Bulldogs were able to hold on in the second half. Freshman goalkeeper Leonie Doege made a save in the 88th minute to seal the win.

Butler’s defense led the way for their fourth straight win, their third straight at home. Butler has not allowed a goal since their 1-0 loss at Ohio University on Aug. 20. Redshirt sophomore Hannah Luedtke started at goalkeeper, while Doege entered in the second half.

While the Bulldogs only scored once, they had a horde of scoring opportunities. The Bulldogs outshot the Vikings 16-7. Cleveland State only had one shot on goal in the game, while Butler had 10 shots on goal. Junior forward Halle Stelbasky led the team with five shots taken including three on goal. Stelbasky has 23 shots taken this season but has yet to find the back of the net.

“I think it’s always frustrating when you don’t get one in the back of the net, even when you get five or so opportunities,” Stelbasky said. “I’m lucky to have great teammates. Defenders, midfielders, and forwards to back me up. I’m not upset at all.”

The win moves Butler to 4-1-1 on the season. The Bulldogs face a tough opponent in unbeaten No. 12 Texas A&M University on Sept. 8 at 7 p.m.

“The last three matches were all good matches to prepare for Texas A&M.” Stelbasky said. “I’m looking forward to play them because they’ll bring it. And I think we will too.”

The Bulldog’s game at Texas A&M is their last nonconference road game. They will return home and play Indiana State University on Sept. 17 at 1 p.m.