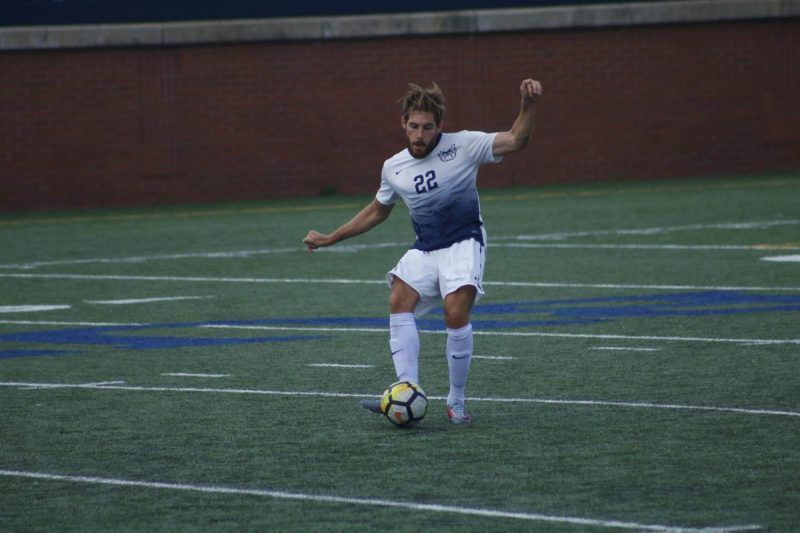 Junior defender Kieran Geldenhuys controls the ball in an exhibition game against Michigan on Aug. 12. Geldenhuys scored the game winner against San Francisco.

The Butler men’s soccer team snuck past the University of San Francisco 3-2 after watching a 2-0 lead evaporate late in the second half.

“I think what’s coolest about this team is it’s a close group of guys,” senior midfielder Eric Leonard said. “We can go up a goal, we can go down a goal, but in the end, we’re gonna stick together and get the win.”

The victory puts the team at 3-1 on the season and they leave the Adidas/IU Credit Union Classic in Bloomington, Indiana, with a perfect 2-0 record.

The Bulldogs opened the scoring in the fourth minute when sophomore forward Brandon Guhl tapped in a pass from junior defender Michael Peay for his second goal of the season.

“It’s a great feeling to score,” Guhl said. “Coach has put so much faith in me this year. It’s nice for me to be able to repay him.”

The rest of the first half was back and forth, with neither team being able to take control of the game. Despite being outshot 7-6 by the Dons, Butler took a 1-0 lead into halftime.

The Dons went on the attack to start the second half, recording the first three shots, but were unable to get a shot on goal.

Guhl scored again with 12 minutes left in the game on a breakaway, his third goal of the season. Sophomore midfielder Lewis Suddick forced a turnover at midfield and fed the ball through to Guhl.

The Dons responded with two goals in three minutes to tie the game.

“We just stopped doing the right things,” head coach Paul Snape said. “We lost our focus. I’m upset whenever we give two goals away but we found a way to win again, and that’s what this team’s going to be about this year.”

“Today, we shouldn’t have put ourselves in that position,” Guhl said. “But the amount of character this team has, you’re going to have to go the full 90 to beat us.”

Next up for the Bulldogs is a matchup with Western Michigan University on Friday, Sept. 8 at the Sellick Bowl.