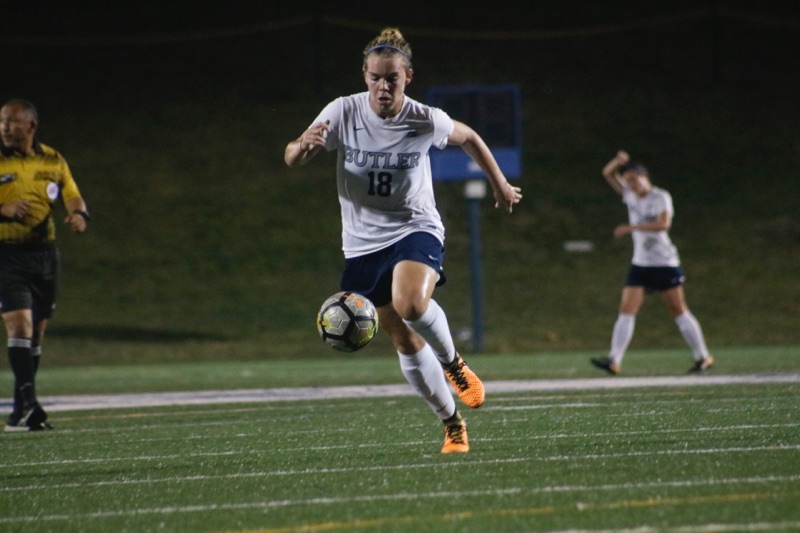 Sophomore midfielder Maeve Burger hustles after a pass on the way to the net. Burger scored her first goal of the season in Butler’s 10-0 win over Chicago State on Sept. 21.

The Butler women’s soccer team cruised to a 10-0 victory over Chicago State University on Sept. 21 at the Sellick Bowl. The win extends the Bulldog’s shutout streak to seven games.

Junior forward Halle Stelbasky scored the first goal of the match at the three minute mark. Stelbasky would add another goal later in the half. Freshman forward Caitlyn DiSarcina joined Stelbasky by scoring two goals in the first half as well.

Junior midfielder Gabrielle Lemkuil and freshman defender Julia Leonard scored one goal each in the first half. Butler led Chicago State 6-0 at halftime.

“I think it’s really important to us,” Burger said. “They got a chance to come out and show what they have. And everyone has confidence with Big East play starting.”

The Bulldogs dominated in all facets of the game. They outshot the Cougars 38-3, including 12-0 in shots on goal. Redshirt sophomore goalkeeper Hannah Luedtke started the match. Freshman goalkeeper Leonie Doege relieved Luedtke in the second half. Neither had to make a save.

Butler finishes 7-1-1 through nonconference play. The Bulldogs will begin conference play against Marquette University on Sept. 24 at 1 p.m. in the Sellick Bowl. The game will be streamed live on the Big East Digital Network.