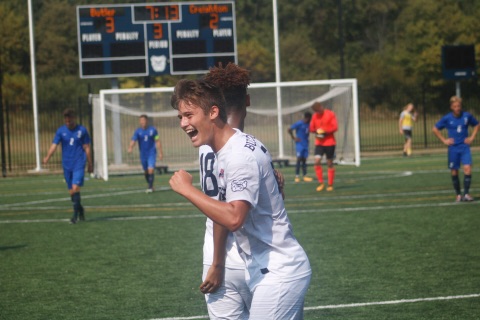 The Butler men’s soccer team started their Big East season off in dramatic fashion, defeating Creighton University, 3-2, in overtime. It was the team’s third overtime victory in the seven games they’ve played.

“Games like these are gonna be where teams can distinguish themselves,” sophomore forward Brandon Guhl said. “Creighton’s a great team. They’ll be towards the top of the Big East and to get this result at home and start the Big East 1-0 is huge.”

Sophomore defender Alex Lehtinen headed in sophomore midfielder Lewis Suddick’s corner kick to give the Bulldogs the win. It was Lehtinen’s first career goal for Butler.

“Going into overtime, we were exhausted but we found a way,” head coach Paul Snape said. “A great Suddick corner kick and Alex Lehtinen just rose like a salmon at the back post. Absolutely incredible goal.”

Creighton took the lead through Ricky Lopez-Espin in the fifth minute after forcing a turnover off of a Butler free kick. Espin-Lopez scored again in the 65th minute to put the Bluejays up 2-0.

Guhl scored in the 77th and 81st minutes for Butler to tie the game on assists from freshman midfielder Joel Harvey and sophomore midfielder Isaac Galliford, respectively.

81′ Dawgs GOAL!!!! Brandon Guhl with the chip over the goalie. Assisted by Galliford.

He now has six goals and two assists in his last five games, recording at least one point in all five contests.

“The guys around me are fantastic,” Guhl said. “They put me into positions to score. When you have teammates behind you that are putting you in positions like that, it makes your job a lot easier.”

Less than three minutes into the overtime period, Lehtinen put the only shot of overtime into the net, giving the Bulldogs another thrilling win.

“Incredible character from the boys today to get [the goals] back,” Snape said. “At 2-0 down, a lot of teams would’ve folded.”

Both teams finished the game with 14 shots but Butler held a 9-7 advantage in shots on goal.

The Bulldogs will take their 5-2 record on the road against Providence College in their next game on Saturday, Sept. 23. The Friars were unanimously named the preseason favorites in the Preseason Coaches’ Poll.

Kickoff is scheduled for 7 p.m.