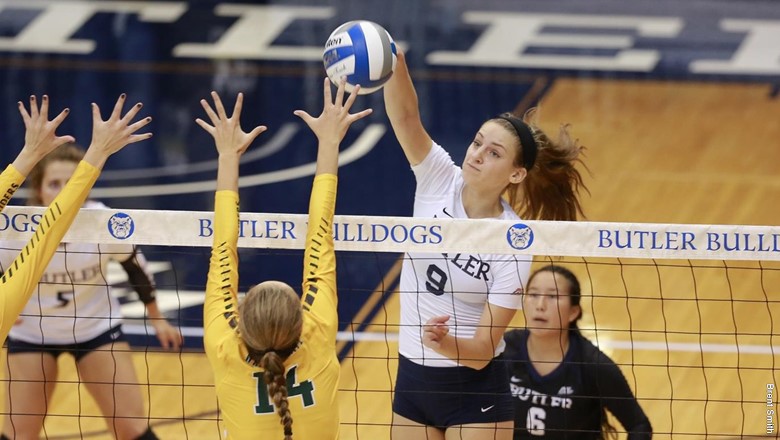 Sophomore Anna Logan spikes a ball over the net. Photo via butlersports.com.

Sophomore outside hitter Anna Logan finished with 21 kills and 15 digs, and junior setter Makayla Ferguson’s 51 assists to help propel the Bulldogs to the five-set victory.

Head coach Sharon Clark said the Bulldogs accomplished some of the goals they set for the season’s remainder.

“The team kept their eyes on their goals today,” she said. “We stayed together and played Butler volleyball. That was great to see.”

Butler held a 14-5 blocking advantage over Georgetown. Ferguson’s six blocks tied for the team lead. She said she took the initiative to lead the Bulldogs.

“I just made sure that I was vocal,” she said. “I was doing my job and working hard so that the team would follow my lead.”

Sophomore libero Taylor Takeda added a team-high 21 digs. Takeda said the Bulldogs came together as a team to earn the hard-fought victory.

“We came together today,” she said. “When we made mistakes, we did not dwell on them. We just moved on.”

The Bulldogs will face the Villanova Wildcats on Sunday. First serve in Philadelphia is scheduled for 2 p.m.