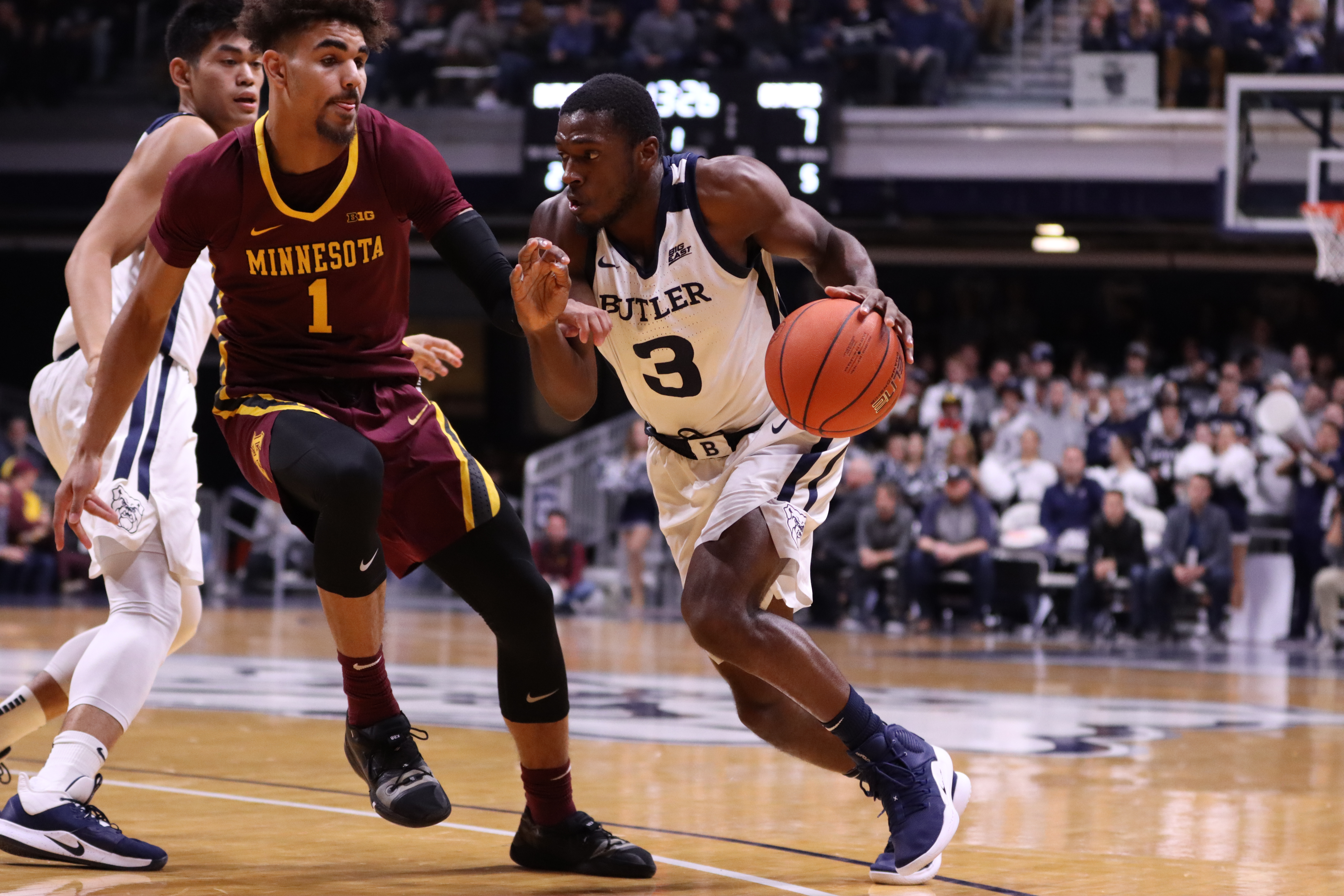 Kamar Baldwin drives to the basket in Butler’s win over Minnesota on Nov. 12. Baldwin finished with 31 points on 11-of-16 shooting against the Rebels. Chandler Hart/Collegian file photo.

Behind a season-best performance from Kamar Baldwin, the Butler men’s basketball team defeated Ole Miss 67-58 in Oxford, Mississippi, in their first true road game of the season. Here’s a look at some of the key news, stats and notes from the victory:

Butler is off to an 8-0 start to the season for just the second time in this decade and the seventh time this century. It’s the longest stretch of consecutive victories for the team since eight straight wins to begin the 2016-17 season. The last time Butler had nine wins in a row during a season was a 13-game winning streak from November 2012 to January 2013.

Kamar Baldwin once again took control of a game offensively, scoring a season-high 31 points on nearly 70% from the field (11-of-16) and 4-of-5 from beyond the arc. After missing portions of Butler’s first two games with a rib injury, the senior guard has averaged over 22 points per game in the Bulldogs’ last six contests. Baldwin spent time in the offseason working on eliminating some of the hitch in his shot in an attempt to improve efficiency, and we’ve certainly seen the rewards of those efforts thus far this season.

Baldwin’s 31-point performance also marked the sixth consecutive game in which he has held at least a share of the team lead in points this season. He didn’t lead the team in points for more than five games in a row last season.

Butler limited the Rebels to just 58 points, marking the sixth time in eight games this season the Bulldogs have held an opponent to under 60 points. Through games on Dec. 2, Butler’s scoring defense was tied for the ninth-best in the nation, allowing an average of 55.1 points per game.

Aaron Thompson had an uncharacteristically rough game, turning the ball over six times, the most of any Butler player this season. The junior guard hadn’t turned the ball over more than three times in a game this season and was top-25 in the country in assist-to-turnover ratio.

For the first time this season, only one Butler player scored double-digit points. Behind Baldwin’s 31 points, Sean McDermott’s nine points were the second-most on the team. In every other game this season, at least three Bulldogs have reached double figures.

The Bulldogs handed Ole Miss their first home loss of the season. The Rebels were 4-0 at The Pavilion to start the season.

What’s next: The Bulldogs will return to Indianapolis for their first home game in over two weeks as they host the Florida Gators on Saturday, Dec. 7. Florida is coming off a 73-67 victory over Marshall on Nov. 29, but slipped from 24th to the first team out in this week’s AP Top 25 poll. Butler defeated the Gators 61-54 at the Battle 4 Atlantis last year before falling by 34 points, 77-43, in their final game of nonconference play. Tipoff is set for noon and the game will air on FOX.