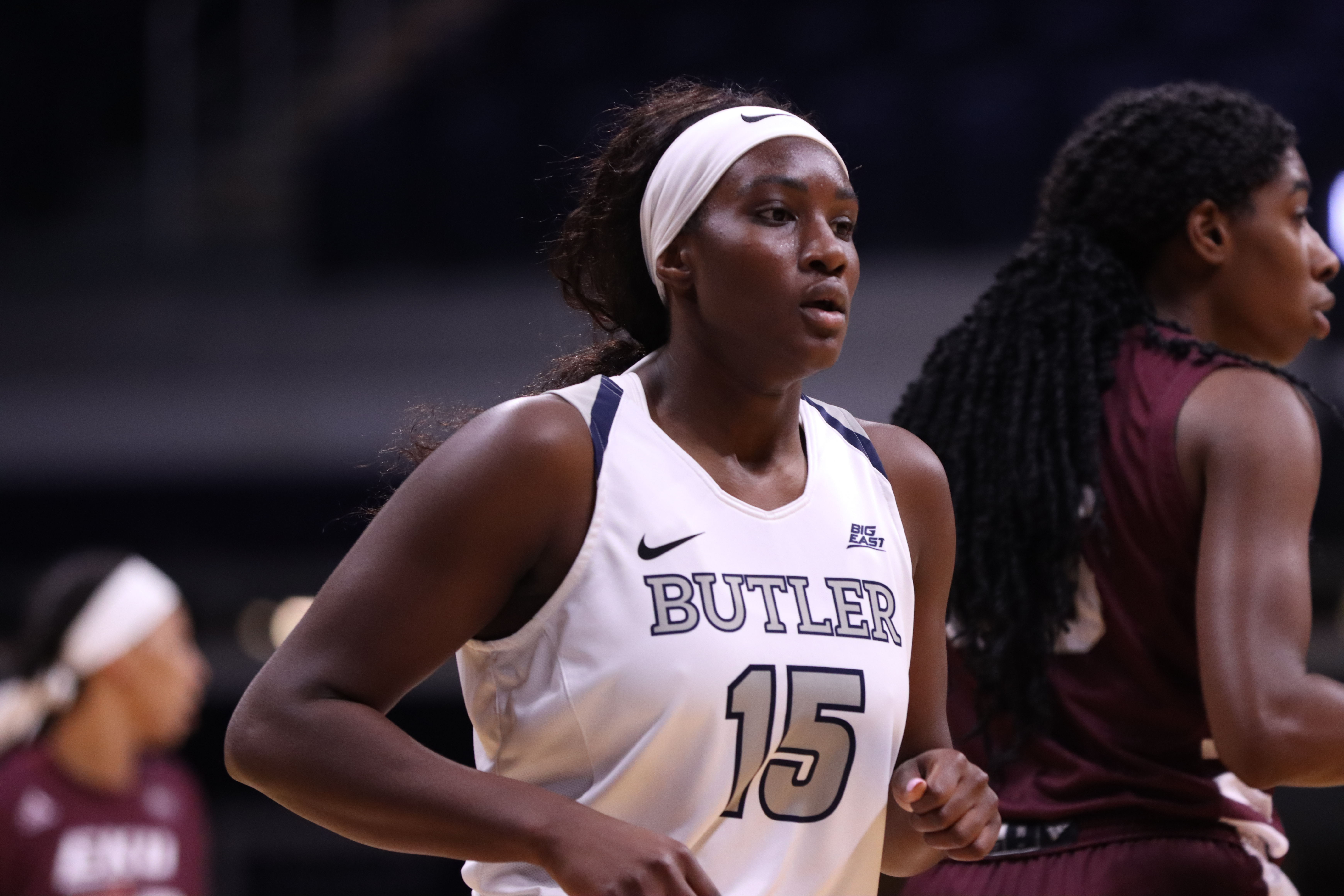 Oumou Toure in action during Butler’s win over Eastern Kentucky on Nov. 17. Photo by Chandler Hart.

As Oumou Toure was being interviewed, members of the Butler women’s basketball team dashed in circles around her. As they took part in a halfcourt 2-on-2 game on Hinkle Fieldhouse, they giggled heartily.

“Can you repeat that?” Oumou asked as she chuckled.

This scene took place after Butler defeated Eastern Kentucky University 73-41 at Hinkle Fieldhouse on Nov. 17, improving to 3-0 while dropping Eastern Kentucky to 2-1. Consider it a microcosm of the team’s burgeoning chemistry.

Toure staged a breakout game, scoring nine points and grabbing a team-high nine rebounds. She attributed it to positive reinforcement from her teammates.

“They’re just like go out there — go rebound, you’re good at rebounding, just go out there, go do that,” Toure said. “You’re good at taking the ball to the basket. Just go do that. They tell me what my strengths are and I try to play into them. All of them. Especially our seniors, they’re really proactive in helping the freshman, the underclassmen in general.”

With four key seniors gone, coach Godlevske expressed some worry that Butler, a much younger team than last season, would gel. If they did, he said after the trip to Italy, they had the potential to be better than last season’s team, the first to make the WNIT postseason tournament since 2010-11.

During the halftime talk, Godlevske hammered away at “maintaining consistency.” That didn’t happen. Instead, the Bulldogs failed to get into the gaps and force the ball where they wanted to, Godlevske said. Despite a second half that saw another defensive breakdown early in the third quarter — Butler allowed a 10-10 “run” to Eastern Kentucky — Godlevske said he was pleased with the direction of the defense.

“We talked about at halftime, that we did a really nice job defending in the first half,” Godlevske said. “I was just disappointed. I thought we regrouped and had some nice moments there in the second half, but overall, very pleased with our defensive effort.”

Like in the other games, Butler experimented with a 2-3 zone defense and man-to-man. Overall, Eastern Kentucky shot 16-of-55 from the field and 4-of-21 from three.

The strategy on the offensive end, to begin the game, was to slow the tempo because Eastern Kentucky employs a fast pace. Even though Butler boasted a healthy lead in the first half, they were shooting just 9-of-24 from the field. While the defense stalled for a brief moment in the second half, the offensive engine revved, going 16-of-31 from the field.

For another example of the offensive shift, look no further than Kristen Spolyar. She went from scoring two points on 33% shooting and four turnovers in the first half to 17 points on 7-of-9 shooting and one turnover in the second half.

“I think we got out and ran a little bit more. We were really trying to play super conservative in the first half, we thought if we played that way, and really made it a grinding game, then it was to our advantage. We kinda loosened it up here in the second half, kinda let ’em go and I think that’s what led to that [Spolyar’s 17 points second-half performance].”

Naira Caceres provided a steady hand throughout the game. With Tenley Dowell out and Genesis Parker on the bench, Caceres played point guard this game. A forward for most of last season, she refined her ball-handling skills over the offseason. Thanks to training with assistant coach Kierra McCleary, she transformed an upright stance into a crouched one.

“So I did put a lot of time during summer and I feel like right now,” Caceres said. “When it’s time for me to step up, and play the point guard when the team needs it, I’m capable of doing it.”

Caceres also knocked down a team-high three 3-point shots, which is essential to a team that wants to spread the court more than ever. Overall, though, the scoring came from everywhere; seven or more players recorded five or more points.

“I just thought we got some key contributions off the bench,” Godlevske said. “Oumou [Toure] didn’t play the minutes that the starters did, but she led us in rebounds. Played some really key minutes. I thought Emilia came in, had to guard her, made some shots, and those are the things that we’re gonna need if we’re gonna keep on being successful.”

Butler will try to continue their wining-streak in a game at Hinkle Fieldhouse against IUPUI on Nov. 20.