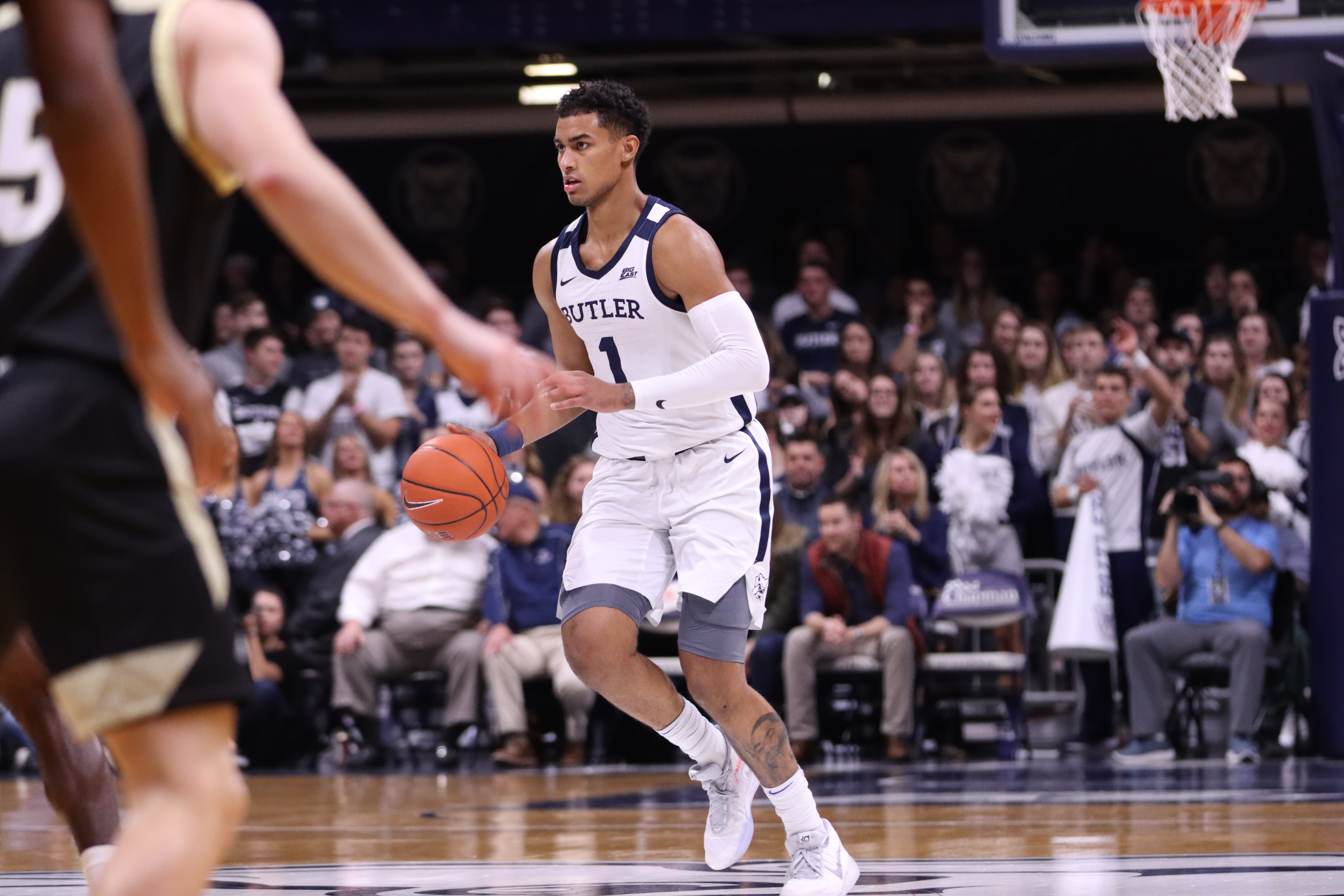 Jordan Tucker brings the ball down the court during Butler’s win over Wofford on Nov. 16. Photo by Chandler Hart.

The Butler men’s basketball team defeated Wofford 80-61 on Nov. 16, picking up their 54th consecutive nonconference home victory. Here’s a look at some of the key news, stats, notes and quotes from the victory.

Kamar Baldwin posted more than 20 points in two consecutive games for the first time since early January. After playing limited minutes in Butler’s first two games due to a rib injury, the senior guard scored 27 points against Minnesota before tallying 23 against Wofford. The last time he had two consecutive games with more than 20 points was Jan 5. and 9 against Creighton and Seton Hall, respectively.

With tonight’s victory, Butler has now won 54 consecutive nonconference home contests. That mark is second-best in the nation, trailing only Duke.

The Bulldogs’ eight turnovers marked the fourth game in a row to start the season that the team has coughed up the ball fewer than ten times. That came after the team had 16 turnovers in each of its two exhibitions.

Butler held Wofford to just 19% from beyond the arc tonight, marking the first time this season the Terriers have been held to under 30% on 3-pointers. Wofford entered Saturday 22nd in the country in 3-point percentage at 42.7%.

Wofford coach Jay McAuley credited Butler’s defense for disrupting his team’s rhythm. “I think the way their staff has those guys guarding… they’ve got older guys, they’ve got the ability to switch some,” McAuley said. “There’s no question they bother you.”

Butler was 16-of-19 – 84% – from the free-throw line against Wofford after shooting just 64% through their first three games. The Bulldogs entered the game tied for 265th in the country in free throw percentage.

It’s still unclear when Derrik Smits will see game action. “I would say he’s still day to day,” coach Jordan said following Butler’s win. “What we don’t want is [for him] to be in and out. We want him back, back for good. So we’re going to take our time and let the medical staff decide what’s best.” Smits has missed Butler’s four regular season games due to a knee injury.

What’s next: The Bulldogs will have nearly a week off before welcoming Morehead State to campus on Friday, Nov. 22, as the Hall of Fame Classic continues. The Eagles are coming off a 76-53 win over Maryland Eastern Shore on Nov. 16 and are 4-0 to start the season after being picked to finish sixth in the Ohio Valley conference in the annual preseason media poll.