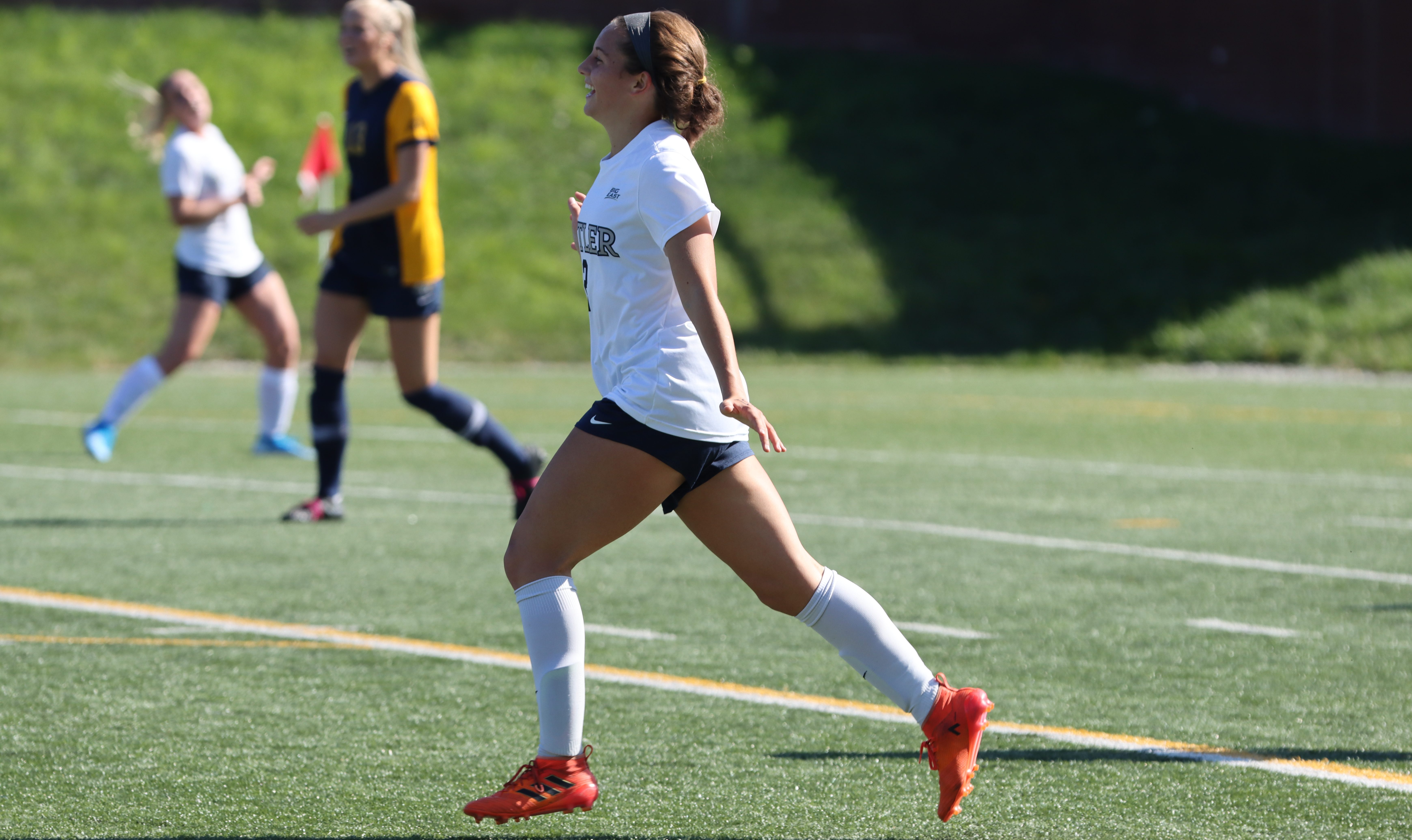 Katie Soderstrom celebrates her goal in Butler’s win over Marquette. The Bulldogs are now 10-4-3 on the season. Photo by Chandler Hart / Butler Collegian.

The Butler women’s soccer team defeated Marquette 3-0 at home on Oct. 27 to bring their record to 10-4-3 this season. Butler notched three first-half goals to sink the Golden Eagles at the Sellick Bowl. Here’s what we learned:

1. The Bulldogs jumped on the Golden Eagles early and never looked back

Butler scored three goals in the first half for just the second time this season to mount a halftime lead that the Golden Eagles were never able to overcome.

Macy Miller, Katie Soderstrom and Alana Wood all scored in a first half that saw the Bulldogs dominate nearly every offensive stat category.

“We played some really really good attacking soccer in that first half,” co-head coach Rob Alman said. “We applied a very high pressure game plan out of the gate and committed to that today, which is brave to do at times.”

The Bulldogs weren’t quite as aggressive in the second half after they grabbed the big lead but still outshot and outchanced the Golden Eagles throughout.

Butler hasn’t lost in their last six matches. That stretch has been headlined by a five-game span where Butler hasn’t allowed a goal.

The clean sheet against Marquette was Steph Rodriguez’s ninth of the 2019 season. She is currently leading all Big East goalkeepers.

“I give most of the credit to my defenders,” Rodriguez said. “They do a lot of the dirty work before it even leads to me having to make a save.”

Rodriguez has only been forced to make four saves over the Bulldogs last three matches.

Their defense was suffocating yet again in the win over Marquette resulting in a front-footed effort for the entirety of the first half.

Marquette was only able to muster seven shots in the match and saw little time in open space to create opportunities.

The Bulldogs close their regular season with a huge match against Big East-leading Xavier. Butler’s win over Marquette clinched their spot in the upcoming Big East conference tournament, but there is still much left to be determined including who will come away with the conference regular season championship.

Xavier can clinch the Big East regular season championship with a win over Butler. The Musketeers could drop all the way to third with a loss in the regular season finale.

The top-two finishing teams in the Big East earn a bye to the semi-final of the conference tournament. Butler, Xavier and Georgetown are all vying for those two spots heading into the final match.