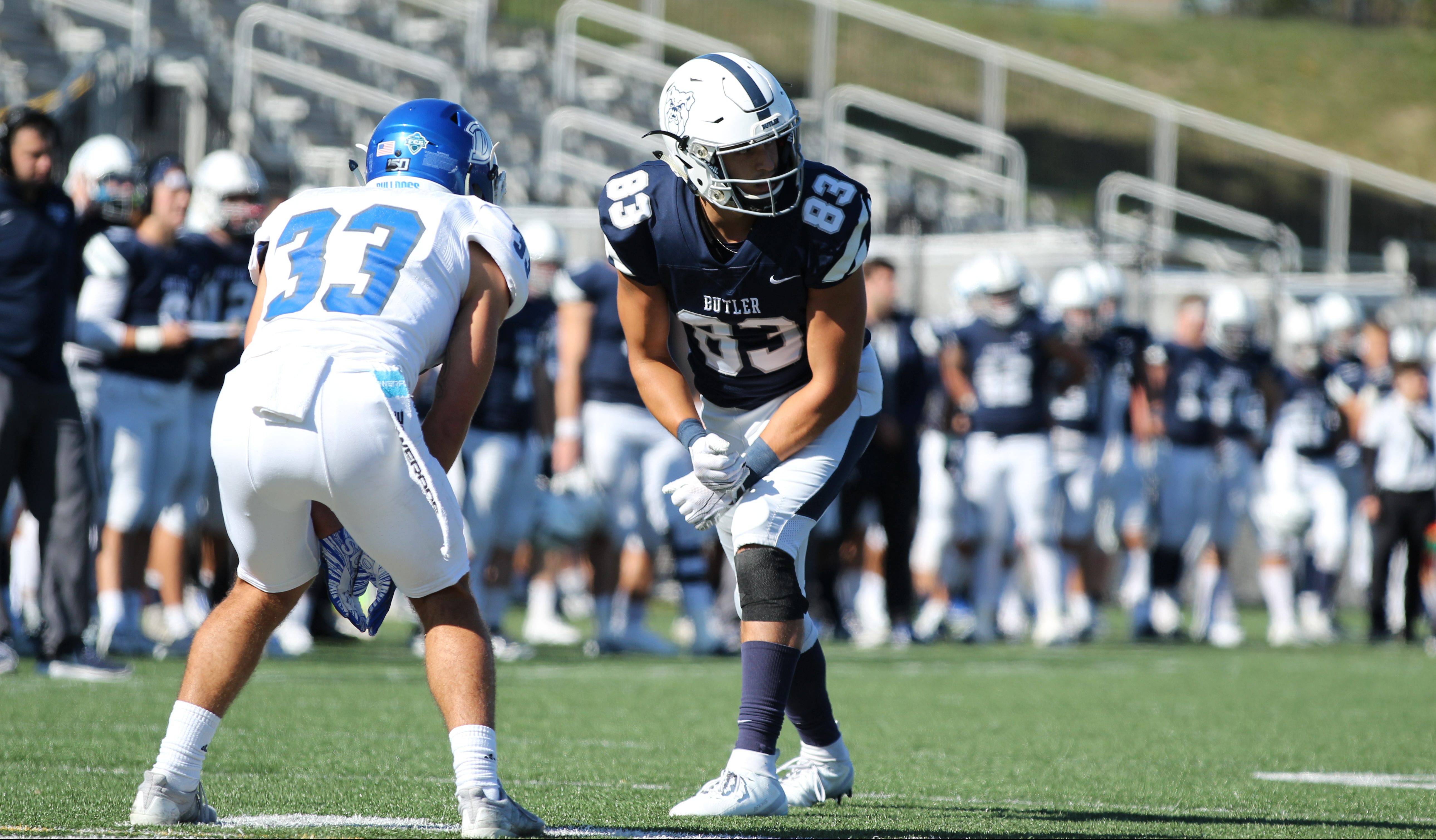 Stephen Dennis gets set for a play during Butler’s loss to Drake on Oct. 12. Photo by Chandler Hart.

The Butler football team was defeated by Drake 42-7 at home in a one-sided affair on Oct. 12. Butler fell to 1-5 as Drake improved to 3-3 on the season.

Butler got off to a rough start as they fumbled the opening kickoff, allowing Drake to take over inside Butler’s 20-yard line. This resulted in a 1-yard rushing touchdown by Drew Lauer, giving Drake an early 7-0 lead.

Butler responded with a big offensive drive, consisting of a 3rd and 18 conversion and a fourth down conversion. The drive was topped off with a trick play that lead receiver Joey Lindstrom to throw a deep pass to Johnny O’Shea for 34-yard touchdown, tying the game at 7-7 at the end of the first quarter.

Drake would go on to have their way with Butler for the rest of the half as they extended their lead to 21-7. Drew Lauer took over, as he managed to turn a screen pass into a 22-yard touchdown, followed by 2-yard rushing touchdown later in the quarter.

The second half saw no change in the game flow as Drake continued to dominate in all phases of the contest.

Ian Corwin would find Devin Cates twice from 18 and 13-yards out, followed by Jacob Clay taking it in from a 1-yard touchdown. This gave Drake a 42-7 lead at the end of the third quarter.

Butler would get close to scoring in the fourth but ultimately was held out of the end zone, resulting in the team being shut out in the second half.

Butler would go on to lose 42-7, pushing its losing streak to four games. Head coach Jeff Voris said getting back on track starts by looking forward to next week.

“We start by looking at the man in the mirror,” Voris said. “We have to look at how we can get better. Our team loves to practice and we should have no problem rebounding…We just have to move forward and put our full focus on next week.”

Butler will have a chance to snap their streak as the Bulldogs will take on the Morehead State Eagles on Oct. 19 in Kentucky.