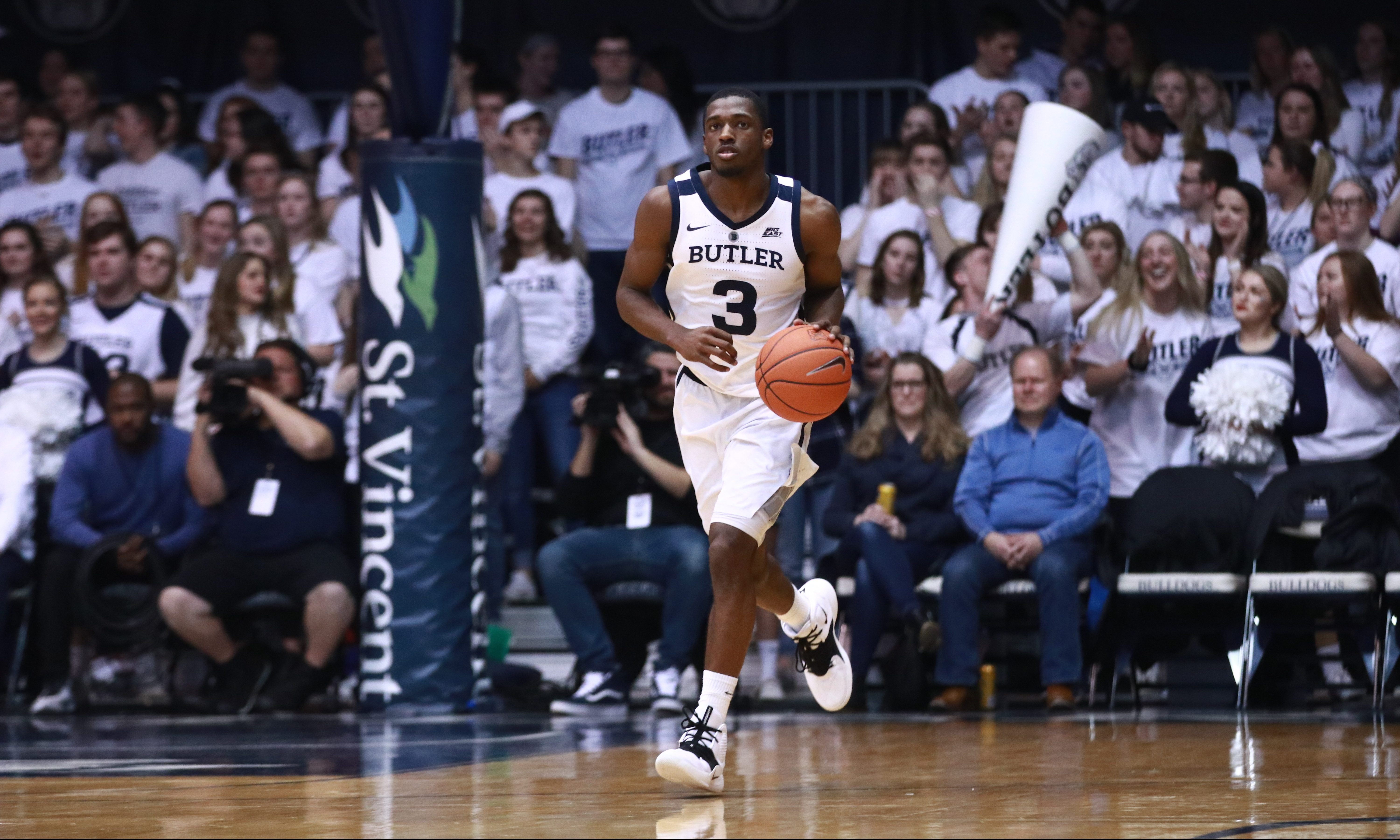 Kamar Baldwin brings the ball down the court during a game this season. Baldwin and the Bulldogs face Marquette on Feb. 20. Jimmy Lafakis/Collegian file photo.

After a 91-78 home victory over DePaul, the Butler men’s basketball team heads to Milwaukee to take on No. 11 Marquette. Here’s what you need to know heading into the matchup.

The defense has to be better than it was against DePaul

Against the Blue Demons, the Bulldogs were graced by a highly-efficient Kamar Baldwin and 12 3-point field goals. However, their defense wasn’t anywhere near the same level. DePaul, typically a 31 percent 3-point shooting team, shot 53 percent from beyond the arc. Eli Cain and Max Strus combined for 40 points on 13-of-24 shooting. While both players are respectable, they aren’t on the level of Marquette’s Markus Howard and Sam Hauser. If Butler brings the same defense to guard Howard and Hauser, it’ll be a long day for the Bulldogs. Beating Marquette on the road is a difficult task in its own right, and if Butler combines bad defense with their tendency to shoot poorly on the road, the job is virtually impossible.

Let Markus Howard go, and stop everyone else.

Marquette is 10-2 in Big East play, and both losses have come against St. John’s. In those two games against the Red Storm, Howard is scoring an average of 13.5 points and shooting just 22 percent from the field. Holding Howard to that level of inefficiency would be lovely, but it’s an unreasonable expectation. The best way to make this Golden Eagle team vulnerable is to prevent anybody else on the floor from scoring. If Butler shuts down the rest of the Marquette lineup, even 45 points from Howard might not be enough if the rest of the team only combines for 20 points. Take away Marquette’s secondary scorers, and Butler has a much better chance of pulling off an upset.

Butler must win the 3-point line.

It’s a broken record at this point, but Butler must shoot the ball well and defend the three to win basketball games, especially against high-quality opponents. Even though they knocked down 12 3-pointers against DePaul, the argument can be make that the Blue Demons won the battle with their level of efficiency. Against St. John’s on Feb. 12, the Bulldogs lost the 3-point line: loss. Against Georgetown on Feb. 9 they won the battle from deep: win. The reality of Butler’s situation is that they are not good enough offensively to win without knocking down a substantial amount of three’s, especially against a team with the firepower of Marquette. If we wake up on Thursday and Butler has upset Marquette in Fiserv Forum, the 3-point line will most certainly be a big reason why.